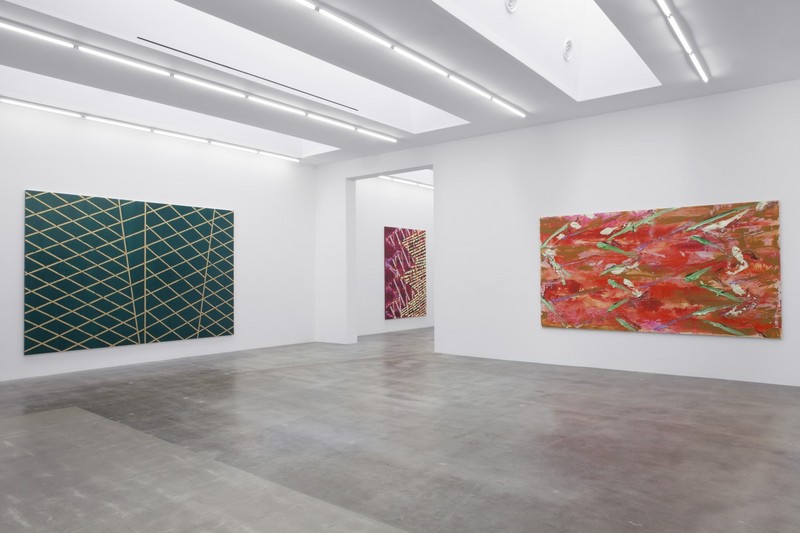 Blum & Poe is pleased to present an exhibition of new work by Kazumi Nakamura. This is the artist’s solo debut in the United States and his first exhibition with the gallery.

Kazumi Nakamura is a Japanese contemporary artist who began his career in the early 1980s, and has since become one of the most active painters among his generation, creating various styles of paintings that explore the meaning of pictorial space.

Early works were made as a way of establishing a unique theory of painting — fashioning a myriad of motifs that were mutually abstract and theoretical. Nakamura's work and philosophy define a period situated between such milestone Japanese post-war groups as Mono-Ha and Gutai, and the contemporary movement Superflat – founded by Takashi Murakami.

Filling the picture plane with bold, vertical brushstrokes, diagonal grids, and intersecting lines of color, Nakamura's interest in abstraction has long been an ontological exercise as a way to philosophically come to terms with the social meaning of painting against the backdrop of ever-changing world affairs. Nakamura’s paintings invite the viewer to traverse a matrix of entanglement and complexity, possessing both originality as well as universal qualities in terms of the depiction of space.

In this exhibition, the artist presents new works that bring together the well-developed styles of accumulated and distorted composition — angular spatial structures adopted from elements of traditional Japanese architecture, as well as symbols of flight and relationality. Large-scale paintings and mid-sized canvases that are created in series of repeated forms combine to evoke a striking atmosphere of dynamic intention and expressive collapse — where continuity is represented socially, personally, and on the picture plane.

Kazumi Nakamura (b. 1956, Chiba, Japan) received an MFA in oil painting from Tokyo University of the Arts, studying under the Mono-ha artist Kõji Enokura. He has exhibited his work throughout East Asia for the past 35 years, with solo museum exhibitions including a large-scale retrospective at the National Art Center, Tokyo (2014); Iwaki City Art Museum (2002); and Sezon Museum of Modern Art (1999). He has also participated in such distinguished group exhibitions as Europaria Japan ’89, Museum of Fine Arts, Ghent (1989); and Japan Art Today: Elusive Perspectives/Changing Visions (1990-91) which toured Northern Europe. A book of Nakamura’s theoretical essays on painting, Tōkasuru hikari: Nakamura Kazumi chosaku senshū (Permeating Light: A Nakamura Kazumi Anthology) was published by Reifū Shobō in 2007. In August 2015, Kaikai Kiki Gallery, Tokyo, published a catalog on the occasion of Nakamura’s most recent solo exhibition with the gallery.
www.blumandpoe.com