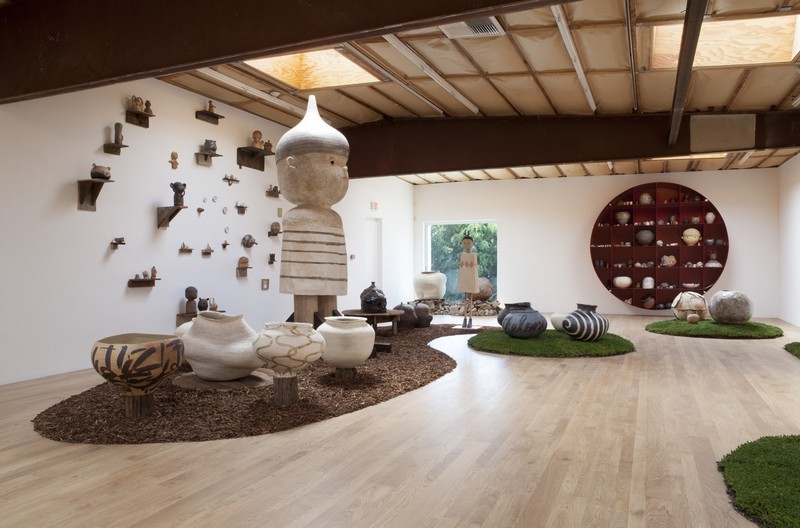 Blum & Poe is pleased to present an exhibition of Japanese ceramics featuring the work of Kazunori Hamana, Yuji Ueda, and Otani Workshop — organized and curated by Takashi Murakami.

Presenting a wide range of forms, designs, and materials, the works in the exhibition draw upon the ancient sources of ceramic tradition in Japan, while also revealing inventive techniques of shaping, glazing, coloring, and firing.

Richly informed by the Japanese art form of the tea ceremony, ceramics have been widely appreciated and revered in Japan. Historically, the tools, teacups, and utensils used in the tea ceremony, as well as the ceremonial aspect itself, have always symbolized levels of hierarchy and respect within society. Amidst the constant cultural and economic shifts in Japan, ceramics have remained unique relics of heritage as well as embodiments of the Japanese sense of beauty.

For this exhibition, Takashi Murakami brings together a new generation of Japanese ceramicists whose unique pottery methods merge a respect for lineage with improvisation, experimentation, and refinement. The work of all three artists — Hamana, Ueda, and Otani — is informed by lifestyle, the love of nature, working in remote surroundings, and sometimes farming their own land. Although these artists are young in age, they are accomplished craftsmen and have been forming, firing, and exhibiting their earthenware in Japan for several years. Many of the works in the exhibition have never been seen before in the United States, as this display of ceramics is an illumination of age-old traditions being expanded into the 21st century.

Kazunori Hamana makes ceramics on the pacific coast, in Chiba, Japan. The work is both stark and full of personality, oftentimes the surfaces are striped or imbued with designs or language. Urns, bowls, vessels, cups, and plates — each irregularly shaped by not only the vast history of the ceramic arts, but also by the characteristics found in the coastal environment where he works.

Yuji Ueda comes from a family of award-winning tea farmers in the Shiga Prefecture town of Shigaraki. His experimental approach to glazing and firing leads to a variety of distinct forms and vessels. Working both in intimate sizes and larger scales, Ueda’s alien surfaces and fragile textures are both tolerant and unyielding.

Otani Workshop is also based in Shigaraki — one of the great centers of Japanese ceramics for the last 800 years. In addition to clay, Otani works with wood, iron, and other materials. His small jars, vases, and other sculptural forms depicting figures and faces are characteristic of the many styles and motifs found throughout Japanese culture.
www.blumandpoe.com