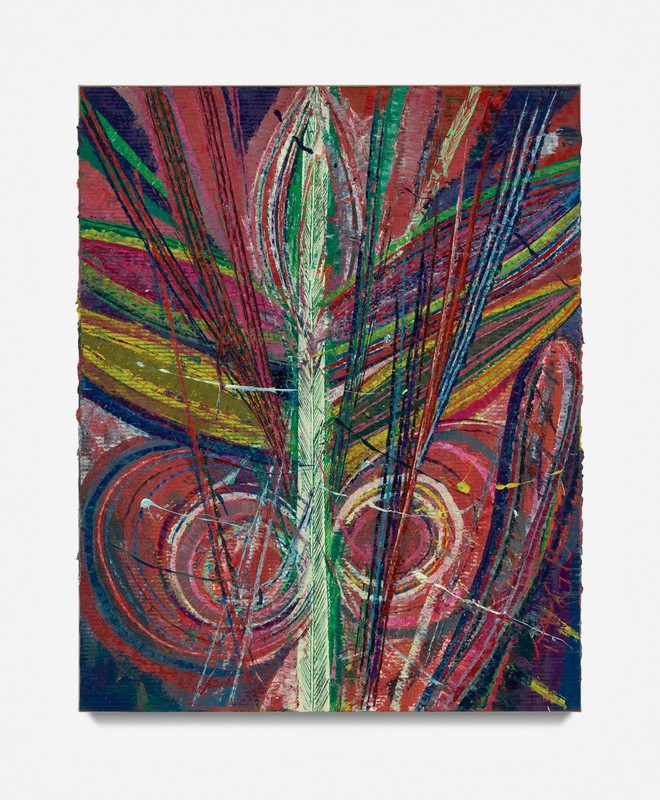 Furthering his exploration into the possibilities of non-representational painting, Grotjahn digs deeper into motifs developed nearly a decade ago in his earliest Face paintings. During the last two years, Grotjahn has made a suite of fifteen oil paintings on cardboard mounted on canvas, each scaled at approximately 50 x 40 inches and informally referred to as “Indians” and “Non-Indians,” distinguishable by their respective color palettes and unique compositions. Each painting is grounded by a central white vertical axis from which the composition sharply radiates outward. Much like his celebrated Butterfly paintings, the prevailing central line (resembling a tulip in early bloom) becomes the backbone from which the rest of the painting emerges. Other recognizable focal points, such as elongated Picasso-esque eyes, flared nostrils, and Cheshire Cat-like grins, can be deciphered upon further reflection.

Grotjahn employs a palette knife to drag, scrape, and feather densely woven layers of oil paint. Aggressively worked from the center of the painting, the impasto offers a glimpse into the many layers of color comprising the composition. Reds, yellows, blues, purples, and greens explode forward from darkened backgrounds. In some areas, the texture of raw cardboard is still visible. Extending beyond the vertical edges, thick accumulations have been left exposed. As one carefully observes and appreciates the complexity of the process, the generosities of the works as a whole are revealed.