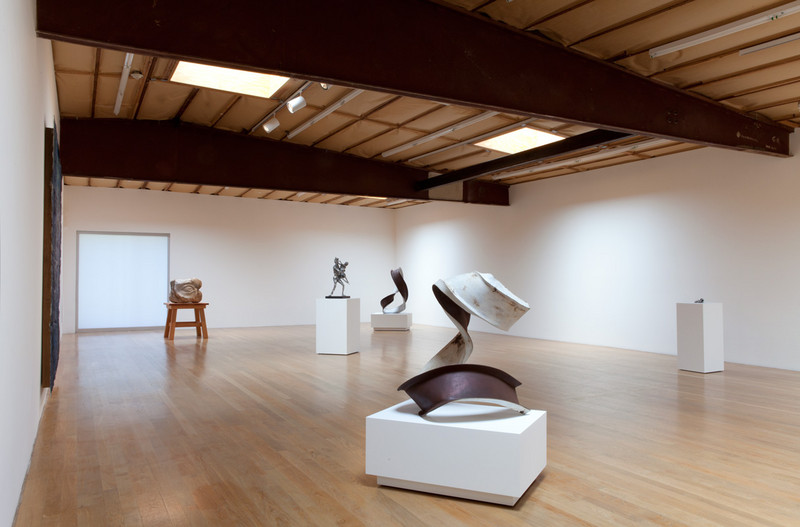 Blum & Poe is very pleased to present an exhibition of new work by Matt Johnson, marking the artist's third solo show with the gallery. This exhibition brings together Johnson’s most recent work questioning the meaning and potential of familiar objects rendered via classical modes. Johnson’s instinctive humor and ongoing investigation of antiquity, science, and religious thought are played out in materials both modern and timeless, high and low.

Featured prominently are four works from the artist's new series Lautner Beam / Super String. Johnson repurposed cast-offs from John Lautner's demolished Shusett House into rustic metaphysical visualizations of string theory, the forms hypothesized to describe matter itself. Cast in steel from the arched beams of Lautner's modernist structure, they are reworked into trompe-l’oeil, elegant forms, as if each hulking 20th century strut were flexible as a rubber band, or fluid as a vibration.

A discrete series of hand-carved granite sculptures, beginning with a freestanding nose in 2013, has evolved to include Stone Eye and Stone Ear. All of them were modeled after generic plaster casts now generations removed from Michelangelo's David (1501-04). Recalling the Colossus of Constantine (c. 280-337), which was dismembered and re-grouped piecemeal over millennia in Rome, Johnson’s fragments consisting of rough hunks of granite are immediately forlorn and relatable.

In a scrappy reimagining of Bernini's tumultuous Rape of Proserpina (1621), Johnson’s new sculpture Tin Foil Sculpture (Pluto and Proserpina) reveals its own frailty through the deliberate use of aluminum foil. Another versatile invention of the last century, the omnipresent blue tarp, becomes a canvas for the heavens in the artist’s Untitled (Cosmos Tarp). Seeing the expansive universe in the commonplace, Johnson aims to point out that oftentimes the mysteries of time and space emerge out of the commingling of contradictions, apparent opposites, and dualism.