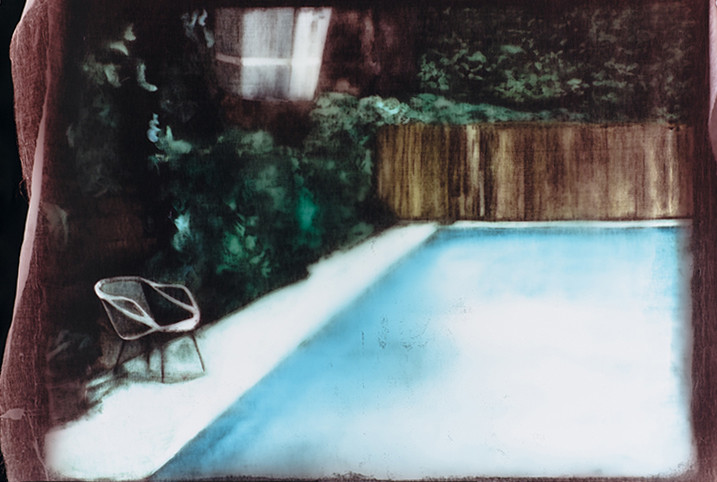 Blum & Poe is pleased to announce Neon in Daylight, Matt Saunders’ second solo exhibition at the gallery. The artist will present a new video installation and two distinct bodies of work featuring his cameraless photographic technique in which light is passed through painted linen or Mylar onto photosensitive paper, producing unique works that utilize and implicate the process and appearance of paintings.

In his most recent series, Saunders introduces the element of color, painting chromatic “negatives” and generating chromogenic prints through their exposure. Saunders obtains images from a variety of sources, including Joseph Cornell’s collage film Rose Hobart (1936), constructed from re-colored scenes from East of Borneo (1931), a black and white film in which the title actress appeared. Saunders repurposes these scenes as sparsely colored, seemingly intimate portraits, destabilizing the given linear relationships between material and process, past and present. Complementing the color works will be large black and white silver gelatin prints. The Liverpool series are gestural abstractions made by applying ink on plastic. For the Magdalena series, Saunders manipulated the chemistry to coax a subtle color palette out of exculsively black and white materials.

In addition to these works, Saunders will present King Hu / Reverdy, a multi-channel video installation that functions as a kind of inversion of Saunders’ recent video Reverdy / King Hu. The so-called subjects are conflations of abstract compositions and animations with ink on Mylar, partially based on Chinese wuxia martial arts film director King Hu. In his use and disruption of appropriated stills and original compositions, Saunders touches on both the complicated relationship between materials and motion, and a kind of temporal flatness introduced to the experience of looking in the age of the infinite image archive. “Neon in daylight is a great pleasure,” writes Frank O’Hara in his “lunch poem” A Step Away From Them, walking through Times Square with Pierre Reverdy’s Poems in his pocket.