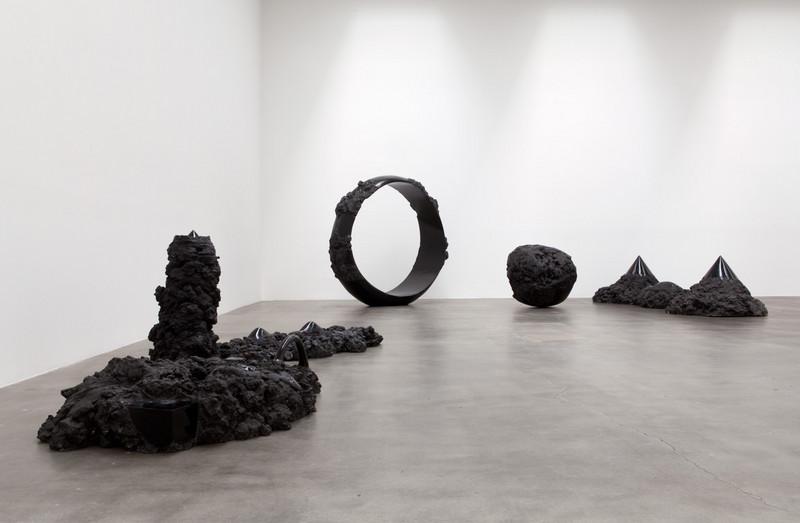 Blum & Poe is very pleased to present a large survey exhibition of Nobuo Sekine, one of the key figures of Mono-ha, a group of Tokyo-based artists who radically changed the direction of Japanese art during the late 1960s and early 1970s by examining the interrelationships among natural and industrial materials, space, and perception. This is Sekine’s first solo show with the gallery and his first solo presentation in North America following his participation in the award-winning survey Requiem for the Sun: The Art of Mono-ha, curated by Mika Yoshitake, assistant curator at the Hirshhorn Museum and Sculpture Garden, held at Blum & Poe and Gladstone Gallery, New York in 2012.

The emergence of Mono-ha is widely attributed to Sekine’s iconic Phase—Mother Earth (1968), a cylindrical hole in the ground, seven feet wide and nine feet deep, accompanied by an adjacent cylindrical tower of earth molded into exactly the same dimensions, exhibited at the 1st Contemporary Sculpture Exhibition at the Suma Rikyu Park in Kobe. Phase—Mother Earth was an early manifestation of Sekine’s engagement with the concept of “phase” in topology, a branch of mathematics concerned with abstract space and connectedness — specifically the properties that are preserved under continuous deformations. Through this discipline, Sekine perceives form, matter, and space as infinitely malleable. His early Topology Series made of bent plywood and bright, neon colors exemplifies these concepts and transforms the viewer’s visual perception.

Central to the exhibition at Blum & Poe will be Phase of Nothingness—Black (1978–79). This little-known series of black FRP sculptures contrasts the natural and the man-made, ranging from rough, clod-like forms that lie low on the floor to highly polished, geometric shapes that stand tall like totems. These works mark a crucial shift in Sekine’s practice — away from a focus on raw materials and malleability toward the surface qualities of solidified forms. Sekine deliberately made it difficult to identify the material used to create these works — at first glance it is not evident whether they are made of stone, glass, metal, or plastic. When installing these works, Sekine considers their placement to be a “topological scene” governed by aesthetic principles similar to those found in Zen rock gardens — namely, asymmetric arrangements of disparate elements that combine to represent a broader landscape of seas, islands, and mountains.

Nobuo Sekine was born in Saitama, Japan, in 1942, and currently lives and works in Tokyo and Los Angeles. He received a BFA in oil painting at Tama Art University, Tokyo, in 1968. Following his participation in the Venice Biennale in 1970, he had solo exhibitions in Copenhagen, Genova, Milan, Tokyo, and Nagoya. From 1978 to 1979, Phase of Nothingness—Black was the subject of a solo exhibition that toured from the Künsthalle Dusseldorf, Germany, to the Louisiana Museum of Modern Art, Humlebæk, Denmark; the Kröller-Müller Museum, Otterlo, Netherlands; and the Henie-Onstad Art Centre, Høvikodden, Norway. He was recently the subject of an exhibition at the Dallas Museum of Art. His work has also been included in important surveys, such as Prima Materia, Punta della Dogana, Venice, Italy, 2013; Parallel Views: Italian and Japanese Art from the 1950s, 60s, and 70s, The Warehouse, Dallas, Texas, 2013; Tokyo 1955–1970: A New Avant-Garde, Museum of Modern Art, New York, 2012; Reconsidering Mono-ha, National Museum of Art, Osaka, 2005; Japanese Art after 1945: Scream Against the Sky, Yokohama Museum of Art, Guggenheim Museum Soho, New York, and San Francisco Museum of Modern Art, 1994; and Japon des Avant Gardes 1910–1970, Centre Georges Pompidou, Paris, 1986.
www.blumandpoe.com