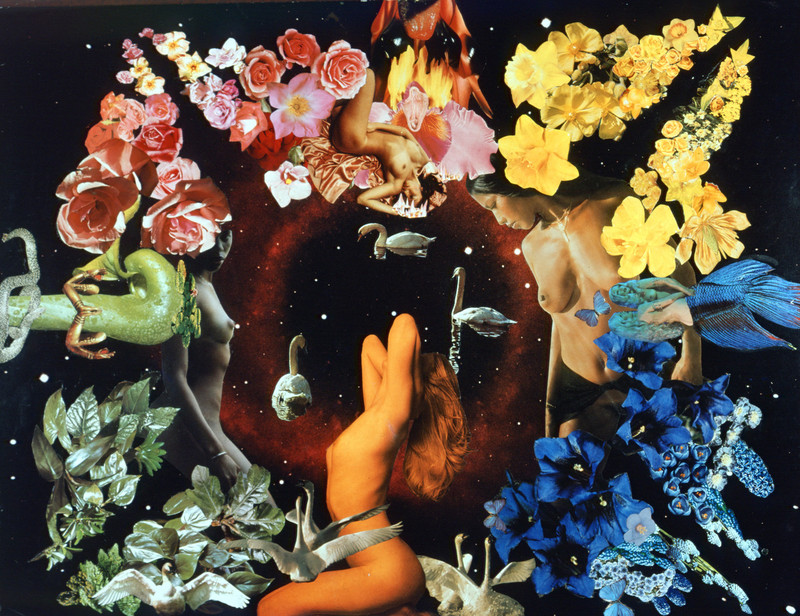 Blum & Poe is very pleased to announce British-born artist Penny Slinger’s first solo exhibition in Los Angeles, bringing together collages from different eras and never-before-seen film footage. Slinger mined surrealism in the 60s and 70s to plumb the depths of the feminine psyche and subconscious, which led her to discover the tool kit of Tantra and to examine and express the more liberated realms of super consciousness.

During her studies at the Chelsea College of Art in late 1960s London, Slinger became interested in the world of dreams and myths which deeply influenced Slinger’s own practice, as seen in her first book 50% The Visible Woman (1971). Using photographic collage and poetry, Slinger’s lexicon of symbols examines how a woman is seen and how she sees herself—woman as goddess, woman as object of desire, woman as mother, and other lenses. The exhibition will include work from this important publication.

In the late 1970s, Slinger used her own staged photographs to create hauntingly surreal collages for the series An Exorcism, which was set in an English Gothic mansion containing both male and female figures, including the artist. Slinger stated, “the images and accompanying captions present a record of the ‘unraveling’ of the Self from dualistic limitations and the projections of others. It sets an example for psychic confrontation and transformation.” These works illustrate a young woman's journey into higher consciousness—a theme Slinger would revisit in the sixty-four-part series Mountain Ecstasy (1978). In these collages, Slinger merges ancient Egyptian, sexual, and occult found-imagery to celebrate tantric alchemy and the divine feminine. For example, in Mountain of Mysteries, set against a starry sky, sphinx-headed women flank a pyramid and the moon. Suspended between the celestial and terrestrial, the works in this series frequently embody sacred, sexual energy. Slinger has explored the connection between eroticism, mysticism, feminism, and art for over forty years.