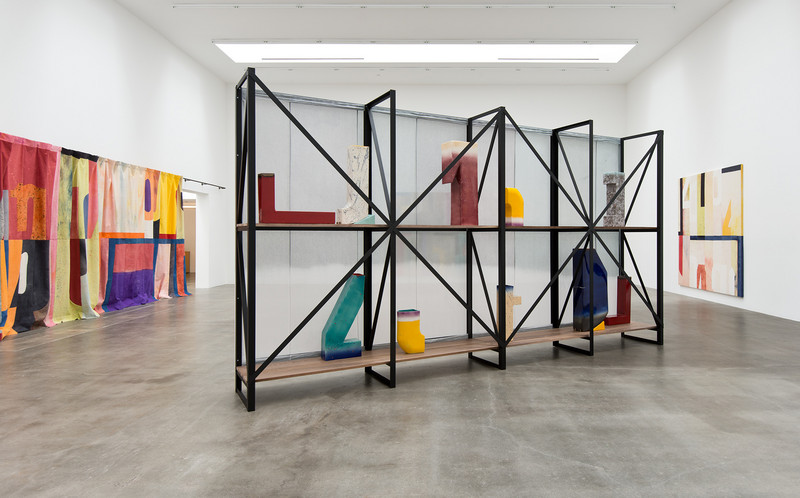 Blum & Poe is pleased to announce The Little Dog Laughed, Mexico City-based artist Pia Camil’s first solo exhibition in Los Angeles. Camil presents three interrelated bodies of work — a large-scale hanging curtain, paintings, and ceramic vases — which are inspired and based on abandoned billboards found around Mexico. Camil appropriates elements, such as strips of color or fragments of a letter or number, and transforms public advertisements into intimate household items, emphasizing the dysfunctionality of a mass consumer lifestyle with a playful but critical gesture.

The title for the exhibition derives from John Fante’s novel Ask the Dust, where Arturo Bandini, a struggling writer based in Los Angeles during the Depression, publishes an insignificant short story titled The Little Dog Laughed. The story’s publication offers Bandini a glimpse of success. Interested in the main character’s false sense of self, Camil delves into the relationship between the personal and public in a modern dystopia.

A large hanging curtain, which typically references domestic and interior space, partially covers the entrance to the gallery and alludes to the idea of a theater backdrop or spectacle (the word for billboard in Spanish is espectacular). In the middle of the room, a large billboard-like structure functions as both a transparent screen and a shelving unit. Upon closer inspection, handmade ceramic vases become visible through the sheer canvas.

The paintings, like the curtain, are created using hand-dyed and stitched canvas, which has often been related to the so-called feminine. Though shapes and colors are repeated, each piece is uniquely constructed in an artisanal manner in order to decelerate the process of massive cultural production. In The Little Dog Laughed, Camil engages with an abstract image in different ways, uncovering the symbols and messages encoded in the cultural landscape.

Pia Camil (b. 1980) lives and works in Mexico City. She has a BFA from the Rhode Island School of Design and an MFA from the Slade School of Fine Art. In November 2014, she will complete a commission for the plaza of the Museo Jumex in Mexico City. She has exhibited internationally, including at ARTIUM, Vitoria-Gasteiz, Spain; the Biennial of the Americas, Denver, CO; Museo de Arte Contemporáneo de Castilla y León, Spain; and Universidad de Guanajuato, Guanajuato, Mexico.
www.blumandpoe.com