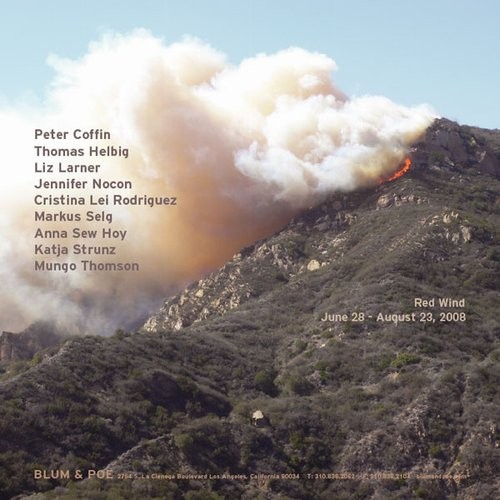 “There was a desert wind blowing that night. It was one of those hot dry Santa Anas that come down through the mountain passes and curl your hair and make your nerves jump and your skin itch. On nights like that every booze party ends in a fight. Meek little wives feel the edge of the carving knife and study their husbands’ necks. Anything can happen. You can even get a full glass of beer at a cocktail lounge.”

“....the violence and the unpredictability of the Santa Ana affect the entire quality of life in Los Angeles, accentuate its impermanence, its unreliability. The wind shows us how close to the edge we are.”

The exhibition Red Wind is an aesthetic response to the meteorological condition known as the Santa Ana Winds. The Santa Ana winds are powerful, conspicuously dry offshore winds that travel through Southern California and northern Baja California most commonly in late summer and fall. During these conditions, it is usually hotter along the coast than in the deserts, and devastating fires are often fueled and heightened by the winds. There is no real warning, but one can just sense it.
The works included in the exhibition embody the title in both literal and metaphorical ways -- evoking mysticism, suspense, and precariousness by capturing a feeling of vague unease. By presenting a selection of international artists, we come to realize that one does not need to live in Southern California to understand the influence of changes in environment. The experience of the Santa Ana winds is evidence of a collective intuited sense of foreboding. Red Wind conjures a theater of instability, fostering and reflecting states, and cycles of tension.
www.blumandpoe.com