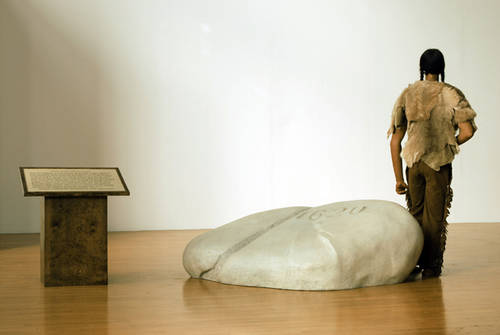 Scenes from the Pilgrim Story: Myths, Massacres and Monuments

The works in Scenes from the Pilgrim Story: Myths, Massacres and Monuments are addressed primarily to white, euro-ethnic Americans, although hopefully others will also find them of interest. The project’s central function is to put the mythology of the Pilgrim Story and the interests it serves into a comparative relationship with history. Works set this comparative stage in different ways; by underscoring particularly problematic aspects of the Story, by foregrounding aspects that are normally omitted from the Story, and by representing events as they were experienced and written about by those on other side of this history- namely Native Americans. Beginning with the English Pilgrim’s migration to Holland and subsequent journey to North America in 1620 the works examine the historical record as it’s been constructed by various institutions in and around the town of Plymouth, in particular the Plymouth Rock. Another focus is Indian-settler relations from the landing in New England in 1620 to King Philip’s War in 1675-76. Details of the individual works follow a brief outline of the historical narrative of the Pilgrim Story on which the project is based.

According to the popular myth, Pilgrims (or Separatists as they were then called) left England for Holland to escape religious persecution. They then left Europe for the New World aboard the Mayflower, bound for what would become New England. Arriving in Plymouth Harbor after their difficult voyage they spotted a large rock jutting conveniently from the shore, the Plymouth Rock, which became the recipient of the first Pilgrim footprint in the New World. But before putting ashore the Pilgrims drafted the Mayflower Compact, which became the beginning of American Democracy, a precursor to the Declaration of Independence and the Constitution. After barely surviving their first winter a friendly Indian named Squanto arrived in the colony. He taught the Pilgrims to plant their corn using fish as a fertilizer, leading to a bountiful harvest the following fall. To celebrate they held the first Thanksgiving, a great feast that they shared with the local Indians. The friendly Indians understood the Pilgrims heroic quest to found a democratic republic with freedom to practice their religion in the empty and untamed wilderness of North America. They quickly came to appreciate the wondrous gift of Christian civilization the Pilgrims so generously bestowed upon them and all lived happily ever after.

This is the popular historical account of the Pilgrim’s journey to found the Plymouth Colony in southeastern New England. Variations on this basic narrative have utterly saturated American culture, from grade school history books to great works of literature, tourist brochures to Hollywood films, as well as at the Plimoth Plantation a “living museum”, the now defunct Plymouth National Wax Museum, the Plymouth Rock and other monuments in the area as well as the local historical society, the Pilgrim Society, a private club which maintains the Pilgrim Hall Museum and another more exclusive club for the male descendants of the Mayflower, the Old Colony Club. These various interests have all contributed to the Pilgrim Story’s central place in American identity.

Artwork descriptions:
Making History (Plymouth National Wax Museum)
Single channel projected video
Before the Plymouth National Wax Museum closed I worked with a photographer to shoot all of the exhibits in detail and secure the audio narratives that accompanied some of the scenes. Using the “Ken Burns” style documentary technique the still photographs are combined with the audio narratives in a filmic tour of the museum. So saturated by the long history of Hollywood westerns, the claim could be made that white America’s understanding of Indians has been formed primarily by the film industry. While not a western, most viewers will recognize the familiar narrative of white-Indian history in this video. Set in the Plymouth National Wax Museum, the video is not a documentary about the museum, rather, it proposes itself as a documentary about the history of the Pilgrims. Instead of seeing the legitimate archival materials (old, sepia photographs, artifacts, actual locations, narrated voice-overs of first person accounts and so forth) that would normally be employed in this type of film, viewers are presented with doubt inspiring wax museum scenes and dioramas in place of what should be proper, factual materials. As viewers become aware of the contradiction between the content (the wax museum scenes) and the form (documentary style) the normally invisible authority of the documentary comes into question. As the video’s tour of the wax museum concludes in a fanfare of hyperbole back at the landing on Plymouth Rock the screen fades to white and the text “National Day of Mourning” comes up. This is followed by scrolling text from the bronze plaque of the same name, which is located outside the site of the former wax museum, overlooking the Plymouth Rock. The text spells out a succinct counter-history from an Indigenous perspective, detailing some fairly plausible reasons why Indians today may not feel like celebrating the Pilgrim story.

Pilgrims and Indians, Planting and Reaping, Learning and Teaching
Mixed media (wax museum figures and props, rotating turntable)
I acquired several figures and props from the Plymouth National Wax Museum and these have been configured to replicate as exactly as possible two scenes originally in the museum. The two scenes are placed back to back on a 16’ circular platform. The scenes are separated by an 8’ wall that bisects the platform which is motorize and rotates at a continuously at leisurely pace. One scene is the depiction of the English speaking Indian, Squanto, teaching the Pilgrim’s to fertilize their corn with fish, ensuring a good harvest in the fall. This scene has served a centrally important role in the Pilgrim Story, it acknowledges that, were it not for the help of sympathetic Indians the Pilgrims would have perished soon after their arrival. According to the Story, because of Squanto’s help the Pilgrims reaped a bountiful harvest, making possible a feast that became the first Thanksgiving. The other scene on the platform is constructed from a postcard I found in the basement of the wax museum. The scene had been removed from display in the 1970’s for obvious reasons- it made Indian- Pilgrim relations all too clear and was an early confrontation that eventually resulted in the extermination of the Pequots. The scene depicts Capt. Miles Standish beating a Pequot Indian with a club. The Indian is on all fours in front of Standish, a tomahawk in his hand, head down, defeated. A colonist militia was later assembled and sent to eliminate the troublesome Pequot people once and for all. Governor Winslow declared a thanksgiving celebration upon their successful return. Contrary to the Pilgrim Story narrative, the Pequot massacre is the actual the basis of our Thanksgiving holiday.

Subject/Position/Object /Placement (Pilgrim Monuments; Massasoit, Metacomet and Plymouth Rock)
Fiberglass replica of Plymouth Rock, Indian figure, sign
A replica of Plymouth Rock is placed on the floor with the “front” of the rock (with the date 1620) facing the viewer. On the side opposite the viewer a standing male Indian figure leans against the rock, his back to the viewer. This orientation refers to several situations, both symbolically and geographically. At the actual site of Plymouth Rock viewers stand on the sidewalk looking at the “front” of the rock with Plymouth harbor opening behind it. Viewers are placed as the Indians were, looking toward the oncoming Pilgrims and the inescapable unfolding of history. Coles Hill rises behind the visitors as they gaze eastwards toward Europe. On top of the hill is the site of the former wax museum, but more importantly for this work, a large bronze statue of Massasoit and a small boulder with the “National Day of Mourning” plaque attached to it. Massasoit also faces the rock, his gaze also looking toward the oncoming plague of history. As visitors gaze at the Rock in Plymouth, their backs are turned to the Massasoit sculpture, which is up the hill, behind them and out of sight. In my sculpture this situation is re-oriented slightly. The Indian figure/statue is brought directly into the viewer’s field of vision, in this case with his back turned away from the viewer, reversing the situation in Plymouth. Next to the rock and figure is a free standing sign with a text dedicated to Metacomet and King Phillip’s War. The text on the sign is a transcription from the actual plaque that is located in Post Office Square in Plymouth. Like the “National Day of Mourning” text used in the video this one details a brief counter-history from an Indigenous perspective, in this case on King Phillip’s War. It notes that after he was killed, Metacomet’s severed head was set on the end of pole and kept on public display for nearly 20 years in Plymouth’s town square. Another monument among the many that have been erected to the Pilgrim’s triumph, but virtually unknown for obvious reasons. An accompanying didactic panel outlines some aspects of King Phillips war, with particular emphasis on how formative it was for American identity, culture and policy that continues today.

A reading area is provided with a selection of books, texts and research materials that were used in the formation of the works as well as covering issues beyond the scope of the artworks; larger historical, political and social issues of white-Indian relations, land issues, reparations and so forth. Several large didactic panels in the reading area containing comparative information, text citations and images will provide additional information to the viewer in order to better understand the complex and under known historical issues to which the artworks are addressed.

Merry Mount Photo Series
Suite of 20 color photographs, edition of 5
I acquired one of the scenes from the now defunct Plymouth National Wax Museum in Plymouth, MA. The wax museum purported to tell the story of the English Pilgrims journey to Massachusetts and the establishment of their Plymouth Colony. The scene I acquired is entitled “Merry Mount” and depicts a dissident pagan community started by Thomas Morton. Merry Mount was intolerable to the Pilgrims as Morton’s followers treated Indians as equals and encouraged indentured servants to break their bondage and live freely in Merry Mount. Eventually the Pilgrims destroyed the colony and sent Morton back to England. After receiving all the figures and parts from the wax museum I set them up in the studio and photographed them against a white ground. The style of the photos refers to western ethnographic practices of recording “primitive” or “indigenous” artifacts and objects for study. Here the figures and objects depicted are obviously fake, raising questions about authenticity, objectivity and historical truth.