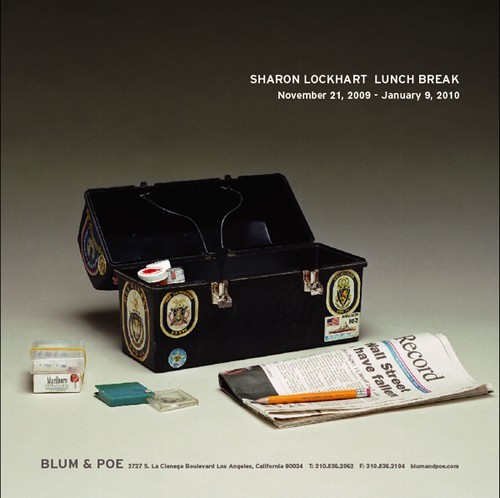 Blum & Poe is pleased to present the first one-person exhibition at the gallery’s new location and the first US showing of Sharon Lockhart’s most recent project, Lunch Break. Featuring two film installations, Lunch Break (2008) and Exit (2008), as well as three bodies of photographs, each element details a different aspect of working life at Bath Iron Works. The shipyard in Bath, Maine, is a microcosm of the issues facing industrial workers all over the United States. Well known for her previous involvement with communities as varied as a city on the Amazon River, a Japanese basketball team, or the youth of a small town in the Sierra Nevada Mountains, here Lockhart shifts her attention toward a community of workers.

Together with long-time collaborators Escher Gunewardena Lockhart has designed two unique installations for her films. Lunch Break features 42 workers as they take their midday break in a corridor stretching nearly the entire shipyard. Contrary to her previous films, the camera is untethered and, as it slowly moves down the corridor, we experience what was a brief interval in the workday schedule expanded into a sustained gaze. Lined with lockers, the hallway seems not only an industrial nexus but also a social one, its surfaces containing a history of self-expression and customization. Over the course of the lunch break we see workers engaged in a wide range of activities--reading, sleeping, talking--in addition to actually eating their midday meal. The real-time soundtrack is a composition designed in collaboration with composer Becky Allen and filmmaker James Benning, in which industrial sounds, music, and voices slowly merge and intertwine. Together, picture and sound provide an extended meditation on a moment of respite from productive labor.

Lockhart’s other film installation is a quite different meditation on time and space. Filmed over a five-day workweek, each of the five takes that comprise Exit shows the long progression of workers leaving the Bath Iron Works at the end of their shift. Each take starts with a title card stating the day of the week, and then begins a routine that varies greatly from day to day. Reminiscent of Louis Lumiere's film, Leaving the Lumiere Factory, Exit emphasizes the flow of time and the nuances of daily experience.

The photographic component of Lunch Break consists of twenty-seven photographs separated into three distinct bodies of work. A set of tableaus in which workers interact around both makeshift and institutional dining tables give us a sense of the various ways workers engage the social space. A collection of the various independent businesses workers have established to provide coffee, hot dogs, candy bars and snacks depicts the makeshift architectures and micro-economies allowed to exist within the larger factory structure. Finally, a series of eighteen more formalized still-lives of the workers’ lunch boxes serve as portraits of their owners and an archive of the trades that contribute to the construction of a ship. In each case, the worker is both framed by and frames the work place.

The Lunch Break exhibition debuted at the Wiener Secession in November, 2008 and will be exhibited at Mildred Lane Kemper Art Museum, Saint Louis, MO in February and will travel to the Colby Art Museum, ME in the July of 2010. The exhibition catalogue, due in February, will feature essays by Sabine Eckmann, Matthias Michalka, an interview with Andras Palffy and architects Escher Gunewardena and a conversation with James Benning and Sharon Lockhart.

Additionally, the world premier of Lockhart’s “Double Tide,” a new film mediation on the work of a female clam digger in the mudflats of coastal Maine will be held at the Hammer Museum on Thursday, November 19th. Lockhart also is featured in a solo installation of her “Pine Flat Portrait Studio” photographs, a spare series of portraits of children the artist came to know during her four-year stay in rural California, on view until January 3, 2010.
www.blumandpoe.com