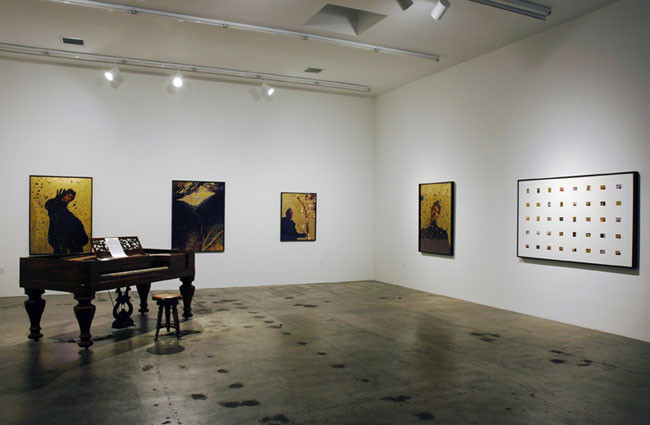 Blum & Poe is pleased to announce our second solo-exhibition with New York based artist Slater Bradley. The exhibition will include videos, sculpture, and drawings.
Bradley will present a sculpture entitled Hope From a Dark Place, created from an outmoded square piano from the 1860s. Bradley uses scrimshaw, the practice used by whalers of engraving marine byproducts, to carve his drawings of False Killer Whales onto the ivory keys. Bradley initially began this drawing project eight years ago, but it was never fully realized until this sculpture. False Killer Whales are known for their highly trainable nature, also for the inexplicable re-occurrence of committing mass suicide. Bradley is concerned with the lack of identity of these whales and their tendency towards taking their own lives, as the name “False Killer Whale” is defined from what they are not, an opposite or negative, which is a notion he often explores throughout his practice. Some whales are etched in performance and play, while others are depicted in their dying state. Bradley draws from an abandoned collective history, and imbues it with contemporary anxieties, while often conversely uses imagery from today and gives it the weight of the past. There will be performances scheduled throughout the exhibition where a pianist cast and clad in a tuxedo suit designed by Bradley through his new label FeS2, will play an original score composed by Max Seigel; a collaborator with whom he has worked on numerous soundtracks for videos, including The Abandonments in this exhibition.
Bradley will exhibit a film Blackwell’s Island, where he takes Thomas Edison’s 1903 black and white “Actuality” film of a panoramic view from a boat of Blackwell Island as it travels the peripheral vista. The name was later changed to Roosevelt Island -- a strip of land that stretches only forty-blocks and lies in the East River between Manhattan and Queens. The film pans such buildings as the old New York City Lunatic Asylum, the Penitentiary, the Charity Hospital, and the lighthouse. Bradley re-shoots this footage and trajectory with Kodachrome 40 Super 8 film, which was discontinued by Kodak two years ago. Bradley superimposes his own color and disoriented footage over Edison’s film, which was made with a now obsolete camera and film stock, to engage in a dialogue between these lost languages. The death of the film stock points to the death of a language. He juxtaposes these variant images to convert them into type of reflection of one another, further exploring how the past and present collide.
This same theme continues in his new series of large-scale drawings. Bradley’s doppelganger, Benjamin Brock, is at times dressed as various iconic figures, yet here we also find him in some works as an abstracted constellation of Bradley, hence the titles of the works relating to outer space. He changes the context of his familiar phantom persona by erasing the c-prints with gold marker, instilling an element of splendor and isolation. By altering his original body of photographs, Slater rewrites his own history, and like Edison’s inventions, he takes something that is endlessly reproducible, and defies this possibility by involving the mark of his own hand.
In the video piece, The Abandonments, Bradley’s doppelganger is filmed dressed as a turn-of-the-century gentleman, Philip Nod, ultimately channeling Gene Kelly’s guise in “Singin’ in the Rain.” Instead of a Hollywood sound stage, he wanders present day Roosevelt Island with the backdrop of disowned historic buildings, alternately seen in their existing state in the piece Blackwell’s Island. Bradley incorporates CGI effects, using a rain cloud that acts as a shadow of Nod’s lunacy. Bradley forms a portrait of insanity, a man displaced from a former realm of madness into a current psychosis, with the skeleton of the asylum as the clue, and a song and tap dance number as an escape.
The title of the exhibition, Hope From a Dark Place, suggests an elegiac awareness that looks to opposition to decipher duality, Bradley invites us not to merely Google the past, but to recognize the past haunting us, and more importantly informing us, in the present.
Bradley was born in 1975 and this is his 29th solo exhibition. He has recently had several solo-exhibitions, including in 2007 at the Contemporary Art Museum, St. Louis, MO and in 2005 The Doppelganger Trilogy at The Solomon R. Guggenheim Museum, New York. Group shows include, in 2006 Full House –Gesichter einer Sammlung, Kunsthalle Mannheim, Mannheim, Germany. In 2005, Bradley was exhibited in Schirn Kunsthalle, Frankfurt; The Gravity of Art, De Appel Foundation, Amsterdam; Superstars – The Principle of Renown, Kunsthalle Wien, Vienna, and he was in the 2004 Whitney Biennial, New York. Bradley’s work belongs to such public collections as, The Museum of Contemporary Art, Los Angeles; The Museum of Modern Art, New York; The Solomon R. Guggenheim Museum, New York; The Whitney Museum of American Art, New York; Berkeley Art Museum and Pacific Film Archive, University of California, Berkeley; Hamburger Kunsthalle, Hamburg, Germany. In 2005 he was awarded The Louis Comfort Tiffany Foundation Award in Video. Bradley lives and works in Brooklyn, New York.
www.blumandpoe.com