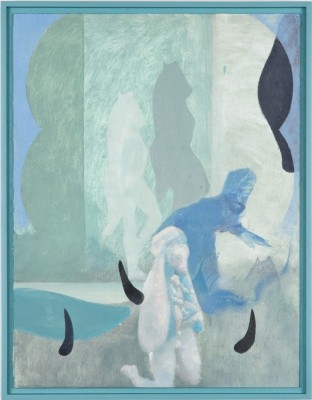 Blum & Poe is pleased to announce The White Shadow of His Talent, the second solo exhibition at the gallery by artist Victor Man.

With this new series of paintings and arrangements of images and objects, Victor Man creates non-linear scenarios that are loosely based on nine fictional texts forming the book If Mind Were All There Was. Man commissioned writers, curators, and artists to write texts revolving around the figure of Giuseppe Sacchi, a 17th Century Italian painter who gave up his profession as an artist to become a Franciscan monk and died young. Sacchi left no evidence of his work and further information about his biography does not exist. One of the few, supposed traces of his life can be found in the Basilica di San Francesco in Arezzo, where his name appears in the form of graffiti, added at an unknown date by an unknown hand, on the forehead of a horse depicted in Piero della Francesca’s cycle of frescos The Legend of the True Cross, completed in 1466. The figure of Sacchi is seen as a metaphor to explore issues of ambition and failure. His almost non-existent biography could describe Man’s interest in the motif of the artist as a lonely being and his fate of self-exclusion from the world.

Taken as a whole, Victor Man’s work is a tour de force into the multiple dimensions of memory. For every image that is carefully evoked from the recesses of history, there are many others that are plunged into the slippery abyss of remembrance and amnesia. With texts by Maria Fusco, Massimiliano Gioni, Martin Herbert, Francesco Manacorda, Tom Morton, Alessandro Rabottini, João Ribas, Torsten Slama, and Martin Vincent, Man conceived If Mind Were All There Was as a chance to re-think the making of art history as a series of acts of inclusion and denial. The texts are accompanied by collaborative drawings Man realized with artist Andro Wekua.

Victor Man’s exhibition The White Shadow of His Talent is a dense orchestration of images and words, history and fiction, and light and darkness. As in the majority of his works, Man explores painting as a site where knowledge and consciousness are caught in a perpetual state of motion; things are remembered and forgotten, and change appearance. Their location in time is never fixed and continually repositions itself.

As it often happens in Man’s oeuvre, multiple references are twisted in a complex web. The motif of the horse, such as the one vandalized in the frescos by Piero della Francesca, is echoed in the title of a series of massive, stone slabs: Places, Lodgings, Company, 2011-2012. Presented alongside the paintings, Places, Lodgings, Company refers to the often-told episode of Friedrich Nietzsche’s mental collapse in 1889. Evidently while in Turin, the German philosopher witnessed the whipping of a horse, after which he threw his arms around its neck and fell into a state of mental illness. In both cases – the vandalization of the image in Arezzo and the flagellation witnessed by Nietzsche – the horse becomes a metaphor for an extreme state of empathy, the medium to express deeper forms of non-verbal connection between human beings and the world. Furthermore, Man has carved eyes into the stone slabs and filled them with colored glass, a decoration partially derived from a building in Turin with nuances taken from the painting The Flagellation of Christ (ca. 1455–1460) by Piero della Francesca. These eyes reinforce the concept of “inscription,” as does graffiti onto fresco and flagellation onto flesh.

Victor Man (b. 1974) lives in Cluj, Romania and Berlin, Germany. His work has been the subject of solo exhibitions in public institutions, including the Centre international d'art et du paysage Ile de Vassivière; Museum Boijmans Van Beuningen, Rotterdam; Hayward Gallery, London; Ikon Gallery, Birmingham; and GAMeC, Bergamo. Man represented Romania at the Venice Biennale in 2007 and participated in the Busan Biennale in 2008, as well as a number of thematic exhibitions, including the Kunsthalle Lingen and Kunstverein Lübeck (in a two person exhibition with Dan Perjovschi); Contemporary Art Center, Vilnius; Arnolfini, Bristol; Museum Dhont-Dhaenens, Deurle; Frac des Pays de la Loire; Kestnergesellschaft, Hannover; and the Kunstverein, Hamburg. The artist is currently having a solo exhibition at the Mudam – Musée d’Art Moderne Grand-Duc Jean, Luxembourg and will participate in Intense Proximity, the Triennale in Paris, curated by Okwui Enwezor. He will also be part of a group show titled Six Lines of Flight curated by Apsara Di Quinzio at the San Francisco Museum of Modern Art in Fall 2012.
www.blumandpoe.com