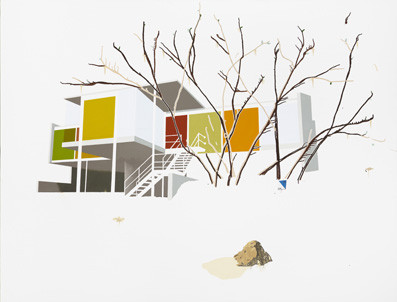 In our Internet-oriented culture, there is nothing unusual about knowing an artist for a period of years only through e-mails, texts, and his oeuvre. So I was particular excited about my "blind date" with Blaise Drummond in Krefeld in October 2009; after all, I had already invited him to participate in two exhibitions at the Kunsthalle Wilhelmshaven (1968 - Architecture in Motion, 2008, and Painting without Painting, 2009). During the speech at the overflowing opening of his first solo exhibition in Germany, his name was called out, but I could not see which of the many heads in the impenetrable crowd of people belonged to Blaise. I strolled over to the Haus Lange, which the artist had converted into a spacious total work of art for several weeks. Usually, in my experience, artists can be found in front of their own works. A man with light hair caught my eye, not just because he appeared pleasant but also because his blue shirt with a stylized flower pattern reminded me of the colorful pattern of wallpapers and drapery fabrics that Blaise often incorporated into his paintings. It was him. If he had been standing directly in front of them, the paintings might have swallowed him up like a camouflage pattern and made him invisible again. Blind date.

Illusionistic painting and its counterpart-causing pictorial certainties to vanish in the conceptual juxtaposition of prefabricated elements-are experiencing a renaissance in art today. Blaise Drummond, born in Liverpool in 1967 and now living in Ireland, far from the centers of the art world, responds in his own ways to the technologically diverse dissemination of the image in our culture. He is part of a generation of painters and sculptors who regarded with suspicion the gestural, "direct" expression in art in the 1990s and instead helped painting achieve a new relevance thanks to a balance of natural and artificial, of the materially distant and materially close, of metaphysics and a physical tie to the earth.

"To talk of 'a piece of nature' is in fact a self-contradiction. Nature is not composed of pieces. It is the unity of a whole. The instant anything is parceled out from this wholeness, it is no longer nature pure and simple [...]. As far as landscape is concerned, however, a boundary, a way of being encompassed by a momentary or permanent field of vision, is quite essential," thus wrote the German cultural philosopher Georg Simmel in his "Philosophie der Landschaft" (Philosophy of landscape) of 1913.1 It was a modern phenomenon that nature became a space for aesthetic experience. That this experience deceives, misleads, and dissects nature, so that in the space in between, in the rift, nature's "Other" always remains in view, is a phenomenon of the present. Blaise Drummond produces landscapes that seem painted and yet get by almost entirely without "real" painting. In his works, the artist brings together diverse pictorial languages that used to be considered irreconcilable: naturalistically painted parts stand matter-of-factly alongside collaged piecework of wallpaper, fabric patterns, wood laminate, and dripped or poured zones of paint. The objects in his works-lakes, forests, cliffs, buildings-stand out against the blindingly white background of the canvas and like loose fragments of a no longer stable modernity. Because the elements appear in other works as well, they have the character of mobile set pieces, whose placement in the rectangle of the painting has a crucial effect on the overall structure of the image. As the viewer's gaze slides slowly across the punched-out edges of the isolated "pieces of nature," repeatedly pausing at the blinding white of the surface of the canvas, a wistful feeling of emptiness results. Something has become submerged, but what exactly? Does this world remain fractured in its component parts when it is observed or does it come together again before our eyes?

Drummond's "exit from the painting" and his preference for primary materials (soil, plants, water) take up the installation art of the 1960s, whose present successors can be considered the dominant contemporary art form. Already at the time, however, people recognized that it is only the isolation of these authentic materials within the white cube that makes it clear that the works exhibited are art. Blaise Drummond plays with the contradictions of the institution of the museum/gallery in many ways, by no longer treating the picture as a window that provides a view of a new world but rather moving it into the (exhibition) wall behind it by flattening out the objects depicted. In the installations Drummond has been creating in parallel with his paintings since about 2005, the collaged, painted, or dumped parts step out of the rectangle of the painting and take their place in the bright exhibition space along with genuine found pieces from nature: birds, oaks, branches, and fully grown trees. Integrating the wall and the floor, the objects develop a highly interactive character, in terms of both form and content, in the newly created "tableaux" and "sets." Drummond seems to be less a conventional painter than an architect of diverse nature, who composes, plans, and builds his ever greater sets with prefabricated and handmade parts, weaving the viewer's gaze into a complex structure of artistic and textual references. The result is pictorial spaces beyond the picture. Drummond has thus declared the luminous white cube a "pleasure ground." But is the white, which bears all other colors within it and leaves all options open, not also a motif of disappearing, of immediate emergence, and of the doppelgänger?


"A Game played with Smoke and Mirrors"

Following a multipart installation in Krefeld in 2009 that is probably his largest thus far, Blaise Drummond set up two related spaces in Copenhagen. "Folk Songs of North America" of 2010 uses real pieces of nature, oil paintings, sepia drawings, objects on the wall, and works on the floor to unfold a wide-mesh circle of ideas above the ideal existence amid nature or rather nature in life. Leo Tolstoy's vision of unspoiled life in nature (Yasnaya Polyana Drawing), Le Corbusier's architecture of the moving observer (Rivers and Small Streams Drained the Land), the dovetailing of inside and outside in Mies van der Rohe's glass pavilions (The Folk Songs of North America), and last but not least the utopias of Henry David Thoreau's utopian manifesto Walden have inspired Drummond's works, but they too are caught in a "game played with smoke and mirrors," as William Rubin once characterized the collage technique of the Cubists around 1912. (quote 2) For the Cubists, their spatial constructions of paper and papier collé were not about reintroducing reality into art but rather about the possibility of reimagining reality or its visual correspondence in the faux bois. Today, the imperfect processes of artistic and everyday activity settle into the spaces between diverse representative forms.

The first space is dominated by a large tree, whose bare branches turn out on closer inspection to be from eleven different kinds of tree, apparently barely held together by a sticky fluid that is dripping onto the floor. It is a kind of fake supertree, which combines all trees and yet reveals its manmade construction. The puddle at its trunk refers to the dominant material of paint as the liquefying and hardening of artistic form and as the structuring principle of appearance. The painters Morris Louis and Kenneth Noland had already employed the gravity of paint in the form of rivulets that drip down on the canvas: "We wanted the appearance to be the result of the process of making it-not necessarily to look like a gesture." The waterfall, more dripped than painted, in the architectural complex of Rivers and Small Streams Drained the Land (fig. xx) recalls the famous Fallingwater house on a cliff by Frank Lloyd Wright. The building itself mirrors the facade, albeit inverted, of Le Corbusier's Citrohan houses, to which Drummond has referred several times in his work. Like a continuation of the rivulets, a real puddle of spilled paint spreads out on the floor in front of the painting, reflecting the natural light in the space. The white can of paint situates the supposedly natural process in an industrial, prefabricated context and as a painting, as a shaped canvas. Faced with constructed nature (natura naturata), the spilled, dripped, or running painter points to the processual aspect of nature (natura naturans).

One look at the drawing The Folk Songs of North America in the second space reveals that these paintings are not only associated with the failed hopes, closely associated with "white modernism," for a different form of life but also about the fragile references that are now subject to a "reconstruction." The question arises whether the oft-cited sources of the international architecture Drummond uses so extensively in his work do not lead the viewer astray. Craig Ellwood (1922-92), to whose oeuvre the artist alludes in two works in the exhibition, was considered a brilliant imitator of contemporary architectural styles. Using the pseudonym Ellwood (his real name was Jon Nelson Burke), the autodidact architect confessed that Mies van der Rohe was his great model-"He was the architect, I wanted to be"-which is particularly evident from his Case Study House 16. The large pool locates the building to the sunny clime of California. The fact that the facade does not reflect in the pool ironically lends the work the autonomous status of that which cannot be copied.

In 1921, even before Theo van Doesburg proclaimed concrete art, Alexander Rodchenko painted his famous triptych of monochrome paintings, Red, Yellow, Blue, and declared he had "reduced painting to its logical conclusion." "It's all over. There are primary colors. Every plane is a plane, and there should no longer be any representation." In 2008, Drummond produced Pavilion, a prototypical work from three wooden boxes placed together and painted inside in three different colors. The traditional primary colors of painting are refined in his color theory as red, yellow, and (now) green. Between the immaterial present of the triad of pure colors and the physical wood object on the wall, the artist makes the future (world) order, not only of art but also of life, visible.