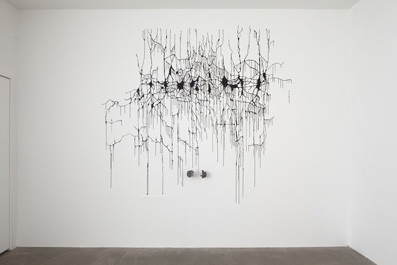 Clouds are amorphous formations enveloped in mythology with a long tradition of being represented in art history, and are not just landing sites for angels. Unpowered flight is, and remains, a great dream of humanity and has cost many lives since the time of Icarus. More recently, an extreme sportsman has jumped from a height of 30km, surviving unharmed. At lower altitudes, tandem skydiving has become a mass phenomenon. Just under a century after Lindbergh's crossing of the Atlantic, an American billionaire will shortly be offering scheduled flights into space. There are so many stories to be told about flight and aviation - from da Vinci's ingenious designs for aircraft, to the beauty of Zeppelins, the ugly Airbus A380 and contemporary airport architecture. But, for the moment, clouds are our theme. As three-dimensional formations, they have many faces; they foretell the weather, allow it to rain and partially darken the sun. Their richness of forms and storage capacity are almost inexhaustible, their materiality takes concrete form and yet is virtual. It is, therefore, no surprise that a gigantic data transfer, the transferring of all our computer and visual data, is taking place currently in virtual space, which we best imagine as a 'cloud'.

Eva Schlegel's photographic work revolves around these fundamental, specific themes - around nature and how to conquer it, around clouds, human flight, our fears about loss of grounding and everything that we associate with it. It is, however, only a fraction of her artistic production, appearing in her oeuvre alongside sculpture, installations, film, drawings and architectural sculptural interventions. The breadth of techniques, methods and ideas that make up her practice, and are all employed by her at a high level both formally and in terms of content, is almost unique. Over and again, we encounter in the murals and projected works, such as those here in Copenhagen, cloud constellations and people in flight, apparently plummeting to the ground, captured from below. Hovering, an implied lightness or weightlessness, is counterposed by the Austrian artist with the material she uses as a visual support: lead. An easily malleable metal of comparatively heavy weight, it was used from early in the history of mankind - resulting in many deaths due to the insidious, severe poisoning caused by extensive exposure to it. The metal is also characterised by its ability to store energy and to protect against radioactive radiation. These dual, positive and negative, qualities and the alchemical myth that gold could be produced from lead, turned this substance into a carrier of mythical meaning. For these reasons, lead was and is not only used domestically and for book printing, architecture and by the military, but it was also used in art. Artists other than Eva Schlegel, such as Joseph Beuys, Richard Serra and Anselm Kiefer have employed this material in their sculptures and installations. At times, this substance, with all of its connotations, has acted as a main expressive medium: for instance, the memory of Serra's monumental lead spaces in the Hamburg Kunsthalle or Schlegel's elemental lead work weighing several tonnes for the Viennese Secession still has the power to steal one's breath away. In Schlegel's photographic work, on the other hand, lead functions as the carrier of an additional visual message. Photographic images of clouds or a falling person have been silkscreened onto lead - and, at the same time, especially the clouds that look like UFOs have been transferred onto paper in large numbers using a heliogravure technique, an old procedure for making prints. The immense, rich contrast between the lightest of whites and the deepest greyish-black, as seen in clouds in nature, is evened out in the lead pictures, whilst being retained in the heliogravure prints.

Eva Schlegel's preoccupation with photography started during her studies in the 1980s under Oswald Oberhuber in Vienna, and her first films were also produced at this time at the University of Applied Arts. Her experiments with fans (they have since become rotors) also began during this period, in conjunction with her diploma project. Meanwhile, Eva Schlegel is no longer as interested in the specific visual variants of photography, instead she focuses on the fundamental compositional potential of the medium. From the start, she utilised photography experimentally. More recently, she appropriates images from other sources, her main resources being anonymous photographs and the internet, which she uses, as she herself says, like a library. She selects specific images of the landscape or cloud constellations, re-photographing the motifs with her own camera, focusing largely on details in her reproductions and modifying the areas of sharpness. She does also, however, use images of clouds she has photographed herself for her lead pictures, which are executed in several stages.

We have all no doubt been fascinated by the view from the window of an aircraft, or even been overwhelmed by the sight of majestic cloud formations as tall as skyscrapers. They appear to float weightlessly, despite their physical mass, being blown along by the wind, their shapes shifting at lightning speed or very gradually - as individual as any human, animal or tree. Throughout the history of art, many painters and draughtsmen have attempted to portray this subject matter, but few of them have managed with any success to produce convincing, vivid, atmospheric images. In the pioneering days of photography with its long exposure times and limited dynamic range, reproducing clouds with any sharp delineation was almost impossible. A second negative was usually incorporated into images of the landscape until well into the 20th century.

Dark clouds, on the other hand, are still used today as a symbol of looming disaster, such as, for instance, in magazine journalism, most recently appearing time and again lowering over the Acropolis in Athens. And yet images of clouds themselves remain a marginal theme in contemporary landscape photography - despite what we know of their sublime appearance when seen from a bird's eye view. Those of us who are not meteorologists cannot forecast the weather from looking at clouds; we just see cumulus and cirrus clouds and other cotton wool formations, and then we run out of terminology. Most of us, whether we are romantically or practically inclined, associate clouds instead with fairytales, such as 'Mother Hulda', films, like 'Wings of Desire' or religious themes - or simply as a sign of imminent rain.

The compact density and supposed tactile quality of clouds becomes illusory as soon as the wing of an aircraft or a propeller almost imperceptibly cuts through them. And this brings us to another important visual element in Eva Schlegel's work. In her film projections, rotors have become visual carriers of meaning, in that they paraphrase and duplicate the notion of flying. Flickering, known to us from early filmic experiments, is also brought to mind. The rotor blades, which we associate with propeller planes or fans, turn so fast that they create the illusion of a disk for the human eye, which can also be used as a plane onto which to project images - an interplay between movement and stasis. Seen from the vantage point of art history, Eva Schlegel could be said to be reworking Marcel Duchamp's rotor relief experiments or Heinz Mack's light rotors - ultimately producing something distinctive in her own turn. The images, films and text that she projects onto the rotors are not the pure light or patterns of colour that her artist predecessors used, they represent floating men and women, captured during a physical experiment in Zurich, as well as weather balloons, sometimes shot at, or texts by astronauts telling of their experiences in space. The states of floating and falling can, as we can see and appreciate here, be simultaneously beautiful and threatening. Text is incidentally a core visual element in Schlegel's installation and architectonic work, even where it is reduced to an abstract or cryptic form - but that is another story.

All of the individual visual factors in Schlegel's work are woven together into a holistic installation as part of her exhibitions, by means, for instance, of the visual extension of space in her use of an enormous circular mirror lying on the ground. The surface of the mirror duplicates the work on the walls and the constant metamorphosis of the visual objects, in this case, the clouds, with the visitor's every step through the exhibition space, creating repetitions and paraphrases in ever-changing spatial impressions.

Aside from the experimental use of the medium, 'pure' photography also features in Schlegel's work. The artist has produced an extensive series of photographs of women from Los Angeles; and she has recently repeated this in Beijing. By means of appropriating and defamiliarising pornographic motifs taken from her earlier, photographic-based work, Eva Schlegel subtly and yet radically plays with our lust for life and carnality, with the allure of the morally forbidden and the inter-relationship between exhibitionism and voyeurism. The artist is thus interested in, and inspired by, very varying themes, subject matter and juxtapositions.

The motif of the hand and its attendant significations of grasping and comprehension are fundamental to the current exhibition. The life-size casts of the artist's own hands and those of her assistant may also be read as a comment on the craft of sculpture. What both protagonists were grasping (or comprehending) during the ossifying moment of casting is left to the imagination of the viewer. Eva Schlegel's images and sculpture always leave a space for our own associations and imagination. And so as not to rob oneself of these enigmatic illusions, one dares not ask the artist about the origins of this grasping and what is being grasped, or where the meaning lies in the images of falling people in suits without parachutes. It is this (unresolved) visual mystery that gives her images their inimitable poetic energy.

Eva Schlegel's oeuvre corresponds to a kind of alchemical shifting of contexts; she forms baffling bridges between visual media, linking almost irreconcilable elements and creating experiential spaces, which preoccupy us conceptually and emotionally for a long time.

you, who are granting protection to cigarettes with your hands against decay one after the other.

you, who are celebrating a tender ageing of both hands by raising the glass for libation.

you, who are embracing lillies with your hands in a twice as much cold season.

you, who are drawing the atonal horizon by nothing else but one hand.

you, who are holding the head in your hands to comprehend what is comprehended as well.

you, who are knocking for time pulse by pulse in your hands.

you, who are inventing technology in order to conserve the gestures of your hands.

you, who are killing the breath of strangers by your hands.

you, who are not enticing your hands to a prayer.

you, who are already touching the other world with your hands.