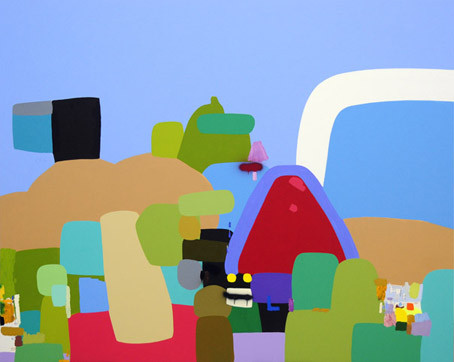 Everyone knows the old romantic dream of the painting as a magic gateway: you step into a painting as though it were tangible reality, the landscape opens up, a winding road shows you the way, you wander over hills and valleys, pass through forests and towns, and lose yourself roaming towards the blue mountains. That is how it is with the young Costa Rican artist Federico Herrero; and yet not at all. He has created pictures that you can stand on, walk on, lean on or swim in. He has for example painted a pedestrian crossing which drew the gallery's exhibition into the street; and at the bottom of a swimming pool in Havana he has painted a map of the world, so that by swimming a few strokes, people can come into contact with the outside world that is otherwise kept at bay by the Cuban regime.

Romanticism and realism, escapism and commitment, dream and reality all meet in Federico Herrero's mental landscapes, and there may be something special about Costa Rica that particularly favours such meetings. This tiny country is located in Central America, and from the capital at its centre, San José, you can travel anywhere in the country within a couple of hours by bus, in any direction: from the Pacific in the west to the Caribbean in the east, and see rainforest, volcanoes, deserts, banana plantations; an unparalleled biodiversity and cultural multiplicity that encompasses Indian reservations, Afro-American Caribbean life, cities in the Spanish colonial style and a globalised capital with amnesia.

I have visited Costa Rica twice, and on the second occasion, at a lecture in the university on "The City and Pictorial Art", I met the writer Fernando Contreras, who has focused on the theme of cultural amnesia in his novel Los Peor (1995), The Peor Family. The main character, Jerónimo Peor, is possessed by an urge to seek out the essence of the city, and will stop at nothing in his quest. From morning to night he saunters through the city streets, across its squares and into its houses, occasionally going down on all fours to let his tongue lap across the asphalt, cobbles or walls. He can taste where he is, he can sniff his way, and eventually he learns to find his way around the labyrinth with his eyes closed. But he must also recognise that the city he sees with closed eyes is not the one he sees with his eyes open, as the city landscape of the inner eye is coloured by dreams and memories, whereas the one visible to the open eye is a place of "forced modernity", impious change, social and racial inequality and accelerating pollution: "We who come from San José are beginning to resemble elephants; we need such big noses to filter out all the city's fumes and smoke ..."

In the course of Contreras' novel, a small child is born who, with one large, black, beautiful eye in the middle of his forehead, belongs to the race of Cyclopeans and is therefore called Polyphemus. In Herrero's pictures, too, we frequently encounter eyes; large, bright eyes; which meet the viewer's gaze. These eyes, like the Lilliputians who regularly appear, are messengers from an alien world. A German sociologist once declared that the exchange of glances is the fundamental social exchange, and the heart of Herrero's universe is precisely this exchange between the familiar and the unfamiliar. Like Jerónimo Peor, Federico Herrero has set out to find, and in a sense reinvent, the soul of the city. But while the author Contreras chose the route of satire, the artist Federico Herrero has taken a path which might be called reflective naivism. In his pictorial universe, the city is illuminated by a colour palette which brings to mind the pictures of childhood: pure, strong, bright shades of yellow, green, red and orange. Even the blue shades become intimate and warm. Colour planes that lie in layers, penetrating each other. And from these alluring colour combinations, a world springs forth that resembles hopscotch squares on asphalt, or graffiti on walls.

Herrero originally intended to become an architect, and has said that his art lies in the cross-field between painting and architecture. When he first began his artistic career a decade or so ago, the city's streets and squares were his canvas. At the turn of the millennium, he simply used the city's trees to hang his pictures, which were painted on pieces of wood he found here and there, or on fragments of canvas. He called this series "Fictional Publicity", but it was a fiction which involved itself in the most direct way possible with the city's life. Since then, Herrero has also found his way into the white exhibition rooms of the galleries, but with paintings that have brought the streets, houses and squares onto those walls. We could speak of an urban palimpsest, in which dense clusters of signs might at first suggest a gable, a roof or a car, then a hilltop, a tree or a piece of sky.

In one painting the word ALA ("wing") has been incorporated into the picture, and it really is as though the pictures have wings that lift the viewer into a higher, brighter and purer sphere.

Compared to other Central American countries, Costa Rica is a pleasant place. It is quite literally a banana republic, and one of the masterpieces of its literature, Carlos Luis Fallas' Mamita Yunai (1941) deals with the role of the United Fruit Company in the country's history. But unlike its neighbours, Costa Rica's history is not dominated by bloodthirsty dictators. As Herrero himself has stressed in an interview, the country has no army, and is less plagued by violence and crime. This does not mean that there are no potential conflicts; in the wealthy neighbourhoods there are iron gratings on the windows, and armed guards in the streets. And the very lively intellectual and artistic communities are wary of Americanisation, such as that which reveals itself in the shopping malls of the expanding suburbs. But all in all, the peace and prosperity that characterises Herrero's universe seems to reflect the experience of the real Costa Rica.

Herrero has studied in New York, and despite his young age of 32, he has exhibited all over the world. Nonetheless, it is clear that the inspiration of the streets of San José is indispensable for him. He did not feel at home on the New York art scene, and after graduating he returned to Costa Rica, which is where his studio is now located. In an interview in Su Casa, the Costa Rican magazine for design, art and architecture, Herrero listed his favourite artists as his peer Nadia Mendoza, also from Costa Rica, the Americans Ryan Trecartin and Josh Smith, Miltos Manetas from Greece, and the Japanese artist Hiroshi Sugimoto. Common to all of these artists is that they do not merely create art for galleries and museums, but also art that intervenes in reality. Just as Herrero has used San José as his studio and canvas, Ryan Trecartin's art has dealt explicitly with the theme of the catastrophe in his former hometown of New Orleans, while with Nadia Mendoza, Herrero shares an interest in the imagery of popular culture.

The interaction between art and life has roots that reach well back into the history of the avant-garde. But when Herrero paints murals, it is not in the tradition of artists like Diego Rivera and José Orozco. The link between the political and the paternalistic is not his concern; his aim is more to change viewpoints than to transform society. As Fernand Leger put it: "a naked wall is a dead surface; a coloured wall is a living surface." Herrero's aim is to electrify the city.

One of Herrero's major inspirations is the Chilean Surrealist painter Roberto Matta, but he nonetheless seems to be closer to his son, Gordon Matta-Clark, who in 1968 aligned himself with the Situationist movement, in which the Danish artist Asger Jorn also played a role. The Situationists spoke of 'détournement', by which they meant bringing pre-existing artistic elements into a new context, and it is precisely this spirit of artistic transformation of reality that underlies Herrero's work.

Another practice that Herrero learned from the Situationists is the mapping process called psychogeography. But his mental landscapes arise in continuous interplay with material reality; he does not merely wish to interpret reality, but also to change it; including its pavements, trees, walls, buses, garages, traffic lights, swimming pools, etc.

The Mexican artist Gabriel Orozco must also be counted among Herrero's influences, and there is no doubt that Herrero would concur with Orozco's statement about the function of art: "What is important is not so much what people see in the gallery or the museum, but what people see after looking at these things."