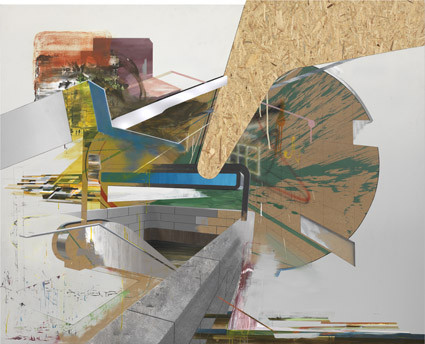 The Assault of the Abstraction - new works by Ivan Andersen

There is something highly contemporary about the works of Ivan Andersen: the viewer is here confronted with all the boring places and atmospheres of the everyday routine, ordained in a chaos of movement, spaces �12;" many spaces �12;" and pure energy. And all of it sampled to the point of almost abstract unmistakability.

All of Ivan Andersen's works in the exhibition Lost horizons and forgotten masterpieces take their starting point in everyday spaces and items: escalators at the station, the suburban home, the bathroom, the usual living-room furniture, the shopping centre, the kindergarten, etc. As so often in the artist's earlier works, it is urban structures and everyday objects that form the gateway to Andersen's contemporary portraits. Specifically, these recognisable and identifiable motifs lie in the foreground of the picture. Parts of the motifs are often reproduced with an almost photographic exactness. The paint may be applied to the surface with precision and accuracy, but it is not laboriously overdone, as though in an artificial, hyper-real world. The motifs are not allowed to stare for long, like anonymous modernist monuments or signs. Elegant attempts are made to destroy them by means of massive abstract assaults and shifts in reality, and by immense bombardments of colour and movement. And suddenly, we find ourselves in a different space entirely.

Really, it would be quite straightforward to attempt to read Andersen's works as expressions of contemporary indifference, decay and alienation. Disillusionment, fatigue and depression. But that is simply not what the works are about. These welcoming entrance points of urban familiarity are merely a pretext for painting. Yes, painting! For that is really what the works are about: an intelligent and impressive display of the possibilities of painting - in composition, colour, form and line. For Ivan Andersen is not the Michael Strunge of visual art. No, he is a painter-painter!

Nonetheless, the influence of the eighties can be discerned in Andersen's aesthetics. The fiery colours and lightning-like lines call to mind the design of Danish television programmes of the eighties, such as the set design of the Eldorado programme with

Jørgen de Mylius, or the scenography of Zig Zag, a programme for children and young people. Or indeed David Bowie's androgynous Ziggy Stardust character, which, while it was created in the seventies, was hailed as an icon in the eighties. But there are also black and dark passages, in smooth transitions which fade to the most distant image plane like an infinite universe. Both disco and punk. And preferably in direct contrast.

Andersen's way of working with painting is composed of a vast array of techniques and experiments. The surface is condensed from these different approaches to the textural character of the painting, but what may at first seem chaotic " simply because

there are so many things that draw the eye in different directions at once " is nonetheless effectively organised in accordance with a single principle; namely perspective as the fundamental structure in the composition of the picture. If all this painterly embellishment had demanded our attention in a single large picture surface at the same perspectival distance to the viewer, the composition of the painting would collapse.

Andersen, however, spreads his composition across countless picture surfaces which clearly lie in front of and behind each other. And this is where the motif really comes into its own: the urban structures and architectural elements provide stringent lines that extend into the picture surface, creating depth and multiple picture planes. The motifs thereby principally serve an organisational, and thus a compositional, purpose; a technique which allows the eye to move between several " and many " different spaces within a single picture.

Andersen's sophisticated ideas and experiments in the application of paint are numerous and imaginative. All of the techniques have their various functions, and all are naturally experienced differently close up and at a distance to the picture surface, respectively. Some simply cannot be seen from a distance, for which reason it is strongly recommended that you carefully examine the works and allow yourself to be impressed by Andersen's varied painting techniques at close range. Here are just a few of the more unconventional ways in which Andersen works with paint: there are scraped acrylic surfaces, which when covered with tape are experienced as flat and uniform.

Where the surfaces are not covered, on the other hand, they appear frayed, conveying movement and speed. Depth-creating techniques are utilised with airbrushes and spray paint that is sprayed directly onto the canvas, or else through stencils, filters " and even net stockings. Lacquer and panel paint is used to achieve fine, twisting, spaghetti-like lines. Acrylic paint is sprinkled and sanded down with sandpaper. Finally, there is also sewing with thread, to refine the line work in the compositions.

In art historical terms, Andersen draws upon the great 'isms' of modernism. But what from a traditional point of view may appear to be an unorthodox blend of such contrasting styles as expressionist experiments with the pastose texture of paint and the slick consumer pictures of later Pop Art is precisely what makes Andersen's works a product of their time. And he is not the only artist on the international art scene to utilise this particular combination. Contemporary artists such as British Dexter Dalwood and Germany's Albert Oehlen work with a similar discourse, and the artists engaged in driving painting out into the so-called expanded field also lie at the periphery of his work.

The exhibited works in Lost horizons and forgotten masterpieces are all characterised by being slightly displaced in relation to Andersen's previous production. Despite enormous explosions of power and energy, the picture surface and composition appear less chaotic than previously. Quite simply, a little less is happening in the pictures, without this producing any diminution in the works' intensity. Quite the contrary. In fact, there is now finally sufficient room for large, multi-perspectival artistic explosions.

The motif takes up less space, the canvas appears in several places in a raw and pristine state, and the picture surface is no longer filled to bursting point. Slowly but surely, abstraction is beginning to dominate the picture surface, and although a painting

without some kind of welcoming motif still seems unlikely in Andersen's practice, the work Plade (Panel) represents an interesting potential step in this direction. The work is composed of several different wooden panels, untouched or painted, and no longer contains a recognisable motif. On the other hand, it projects out into space, and thus expands the painting as a medium. Whereas previously it was the motif that supplied the ammunition for the perspectival composition, an actual displacement of wooden panels now supports the spatial experience.

A new movement is underway in Ivan Andersen's production - the assault of the abstraction.