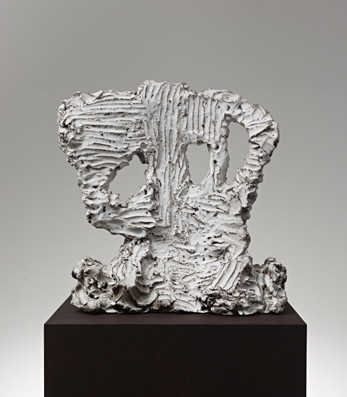 Peter Linde Busk's pictorial narratives are permeated by a strange ambi-guity that puts us as viewers in a double-bind position. On the one hand, theartist depicts his figures as monstrous, scruffy actors in a kind of theatre ofthe gruesome, which not rarely results in the less worthy pleasure associatedwith watching the suffering of others. The way the artist portrays his figures'deformities and anxious frenzy seems to make him partner in this pleasure,this putting-on-display: Behold such people! We witness similar nosiness inthe context of art history's many depictions of the passions and not least themedia world's incessant stream of images from wars, disasters and areas ofconflict.

Yet in Peter Linde Busk's case the horror and qualms are not ever quite sopronounced. The images do not deal with history's tragedy, torture or massacreas such. Although his protagonists and antagonists often wear obscene orgrotesque masks - in the tradition of the derisive medieval images of WilliamHogarth (1697-1764) and James Ensor (1860-1949) - Peter Linde Busk is not amere caricaturist in the traditional sense. While the brush wielding and strokesmay at times appear rapidly done, it is usually the opposite that makes itselffelt: the contour drawing is full-bodied and precisely aligned in a decidedly painterlyway; the composition is rigorous and serious; and colour areas' detail andpitching effects testify to great textural working of the surface - even in caseswhere the artist weighs his sparse precision. In this assembly of artistic workingprocesses and motifs, one thus understands that painting is a slow activity,requiring a great many hours spent in its company. To put it another way, LindeBusk obviously also draws gentle compassion for his subject figures in theircomic debasement. The artist shares this empathy with us, but it neverthelesshas the character of a defiled form of sympathy.

The difficulty in looking at these images - which is their strength at the same time - consists, in other words, in the artist's imperceptible implication of us in his dark and misanthropic impulses. But on the other hand, he also sets up a series of disarming premises that not only appeal to that remnant of humanity we might have left, but are reinforced by the images' tremendous beauty. Just look at Linde Busk's choice of titles. At times, they may seem to establish acrooked or almost rhapsodic correspondence between the image and the viewer that simultaneously underpin their depiction of corruption. At other times it seems as though the artist, in his use of titles, comes close to a certain desire for the redemptive effect of laughter. We learn that the works' titles are not always to be taken at face value, but who is really speaking here? Something tells me that the statements might just as well have come vicariously from the artist himself - from that exposed position he undoubtedly shares with his subject figures, which is why they seem to us to be both declamatory/confrontational and humorous; intransigent and incantatory at one and the same time. But the overwrought quality or quivering unrest hanging over the total work is first and foremost due to Peter Linde Busk's bold, honest and undaunted attitude.

What else can we say about this all-too-human people gallery? It is obvious that in his artistic work Peter Linde Busk stands in contrast to the portrait genre's conventional ambitions. The aim is in no way to demonstrate the subject's greatness or power or for that matter, the model's whole and true "self", despite that the figures are often wearing uniforms or ornate robes that traditionally embody and identify institutions of power, rank and position. Instead, Linde Busk corrupts and turns the figural body into a chaotic, two-dimensional pictorial reality through a kind of expressive-abstract and pattern-borne emblematics.

The figural bodies rarely stand out from their background, but remain firmly anchored in the fabric and the material substratum - despite their expressiveness and vitality. These urgent, grimacing faces, which at times fade away completely into desperation and hatred, give all the characters a touch of unofficiality. Add to this the total distortions and flapping or loosely attached body parts, which are, however, manifest in a quite specific way that never completely deprives these figures of their quality of basic humanity. This double movement is, as already described, a recurrent feature of Linde Busk's work: at the same time as the characters unveil the fragility of the existence and trembling body, they remain beloved and exalted creatures. If Peter Linde Busk's figures are pathetic, they are so in every sense of the word.

We recognise this type of representation of the human body from the grotesquerealism of the swindlery and carnival, which by virtue of exaggeration,negation and degrading forms aimed to act as a liberating counterweight toany idealisation and social ranking. Other comparisons impose themselves, ofcourse, not least with respect to the current exhibition title's reference to thelegend-like story about a group of travellers who in the year 1021 received permissionMass was being said, chose to dance around in the cemetery, accompaniedby song. For that sinful action, which according to the public authorities was asign of demonic possession, these infidel travellers were subsequently smittenby the Lord's hard sentence, which required that they chain dance incessantlyfor an entire year, which for the majority resulted in disability or a slow, exhaustingdeath. The tale gained wide distribution over time, but more with referenceto a medieval form of circle dance or procession (Fr. carole), which in turn hasprovided the background for, among others, the flagellant processions, but isalso - and not least - associated with the Danse Macabre, that allegorical presentationform, which acts as a socially levelling reminder that all are equal indeath.

In extension of this, Peter Linde Busk's numerous figural scenes show him tobe a great social observer. In his paintings, the artist reinscribes the modernindividual's brutal confrontation with society, state and politics in a half-obscuremedieval disguise. The situational scenes are not just depictions of vernacularor quasi-religious processions, but also refer to social manners and demonstrativeself-promotions that characterise urban civilization's social groupingswhose members in a similar way announce their affinities and alliances throughdress, language and gestures. And as in the dance, the carnivalesque type ofmedieval feasts and life in the big city space are thus also relevant of Peter LindeBusk's work: we are never merely spectators or sober observers, but must alllive along with it in fraternal complicity or abrupt confrontation.

This reversible, deeply historical simultaneity of the middle ages and modernity can also be identified on a purely formal or stylistic level, but here the artist hasmany resources at his disposal. He works with these oppositions in particular,providing a sort of overarching characteristic of his art. This is seen in the dramaticexpressionism opposed to the delicate, refined, almost engraved lines orthe dense filler in the earthly, at times glowing and nearly hallucinogenic colouringopposite the mist-light, atmospherically abstract and diluted pigment.

In addition, in this complex association of painting, graphics and collage -recently complemented with ceramic works - many of the components andissues present in his other works are rediscovered, not least in terms of theplay between figure creation and its relapse into substance and sheer materiality.Intuition and process also occupy an undoubtedly important role in LindeBusk's plastic practice, which thus is far removed from the Apollonian figuralobjectives and means, but the sculptures' appearance nonetheless testifies toa great, albeit crass, sensual autonomy. Within each of the artistic media PeterLinde Busk seems to experiment his way to ever-new and vital bases in a continuousartistic self-reflection.

Add to this his purely style-historical operations, and here the art historicallineage is by now well known. In addition to those already mentioned, GeorgesRouault (1871-1958), Paul Klee (1879-1940), Jean Dubuffet (1901-85) and Constant(1920-2005) and, not least, a number of more or less unappreciated visualtraditions from near and far rank among the sources of inspiration. Furthermore,rather undisguised and parodic reference is made to popular culture fictionaluniverses and reinterpretations of the social machinery's intricacies and universalfate stories as seen in such epoch-defining, American TV series as Deadwoodor The Wire. In other words, Peter Linde Busk gets his resources from avariety of flexible frameworks or matrices, but at the same time he orchestrateshis work practice in deeply grounded literary and cultural-historical space thathe congenially proclaims in depth and in width. The overall impression for somecould be that he makes use of a very old language, and he indeed embraces avery wide range of expression. But the references are nevertheless appropriated undogmatically and completely on his own terms, which give rise to mutual legitimisation of historical and modern image types (I imagine that the frequently used moiré pattern effects superimposed with its requirement of a doublybound gaze and a simultaneity of perspectives serves as an illustration of this relationship). Peter Linde Busk's artistic work, quite simply, spans the greatest period of time - including the visual expression we find in his image production and the lowbrow culture's remote smuggler trails. But Peter Linde Busk reminds us especially that we are not free of our debt to the creators of European culture, including literary heavy-weights such as Shakespeare, Baudelaire and Rilke ubject to the burden of tradition, this will by the same token be the means of the artistic work's continuance. That the world is full of images should not lead to moderation; it should instead lead to a demand to create more new images, for although they reveal the problematical nature of existence, we never have enough of them.