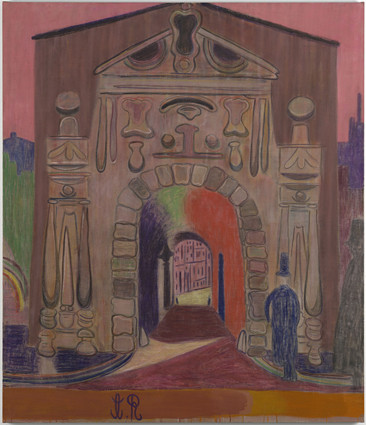 It was once the hippest place in Copenhagen, but it isn't anymore. Notwithstanding the 1990s' laughter still resounding in its walls, it's all over for Stereobar. No more ironically distanced martinis and exotic-sounding vinyl. Verner Panton is tired. And tired isn't at all trendy. The sound needs to be more trashed. It is a Distortion event and I'm supposed to play there for the first time. I've been at it since Wednesday; today is Saturday. Bjørnstjerne is leaning on the DJ console.
I know him from Nørrebro and Superflex. He's standing witha guy in a baseball cap and very humble attitude. I am drunk and single - a whole week now. I start dissecting the two of them. Something about their relationship to women, the city and the world. Bjørnstjerne is laughing out loud. They seem to be amused by the things I'm saying. The guy with the cap tips it. "You're an oracle", Tal finally says. I know that's his name. The next day I roll myself up in a little ball and roll down all the stairs.

The Waterloo strip club darkens one corner, but otherwise Sankt Jørgens Allé is all white. I live in number seven in the 2000s. I move in with lovers in Lille Farimagsgade, Halmtorvet and Sortedam Dossering. Every time it goes wrong, I get cast back home to the no man's land between the city centre and Vesterbro. There are attractions. Many tourists.
Many Jutlanders. Denmark's most expensive convenience stores. My mom comes by with shopping bags and women's magazines. One of them has an interview with Evren Tekinoktay. She's talking about her marriage. It took time for her and her husband to be with each other. He pursued her. She refused him. "But he's a clever man" Evren tells the journalist. "He made a tape for me, so we had another language to communicate in." Two writers have lived in the Sankt Jørgens Allé apartment before me: Peer Hultberg and Morti Vizki. The latter later moved up to number 11, where he committed suicide up on the second floor. Every night I sit down at the computer with all my feelings. Still, the pages remain as empty as the street.

There is a fashion show in the big, beautiful hall at Copenhagen City Hall. While I'm going through the music for the dress rehearsal, Ritt Bjerregaard walks through the hall. You can hear her shoes on the tile floor. She is the Lord Mayor.
She smiles up at the DJ console and I have to stop myself from waving to her. The fashion show is underway. It goes well and I carry it off with no mistakes. The models smilingly clap in unison. They come out in a line and snake their way off the catwalk. Tal and Evren are in the crowd; I greet them.
Evren is one of the most beautiful women in town. During this Fashion Week, I sleep in a number of places. I don't have anyone to come home to, so it becomes undignified.
The bed of the moment.

I fit in well in the pink living room in Rosenvængets Sideallé. I'm floating on a pink cloud. Only one of my two dining partners can see that. The other one looks at me with a snort.
He is very powerful; that's clear. He asks me who I am and just what I'm doing here. Tal has made fish soup, eggs with truffles and some little Turkish meatballs. I have been in love with a woman for 15 years and now I've finally got her. And a kid included. We are together now and we are a new little family. The good dining partner listens with great interest.
"Crazy about it. I'm simply crazy about that story", he says. We dance. Thomas Blachman gets up, stands on a chair and starts giving a speech. His speech is quite affected. We tease him. It's grown late. Before I get my coat on, Tal lifts up his shirt and shows me a tattoo. It says "Diamond Girl".

I've never been to a strip club before. It's Evren's birthday, and she has rented the entire Kakadu in Colbjørnsensgade.
"Copenhagen's Oldest Gentleman's Club," as the sign says.
Copenhagen's oldest self-image. There is velvet all over, Chesterfield sofas and small tables with red tablecloths.
Prince's DJ has been flown in from New York. There is wallto- wall carpeting. The sound is really good. Loud bass in a jewelbox. I go around asking the male guests if they've been here before, trying not to be too provocative. There is an open bar all night, but I've got a little kid. Evren is wearing a dress from an Istanbul flea market. It's white with variously coloured glass jewels. She is still dancing as I leave.