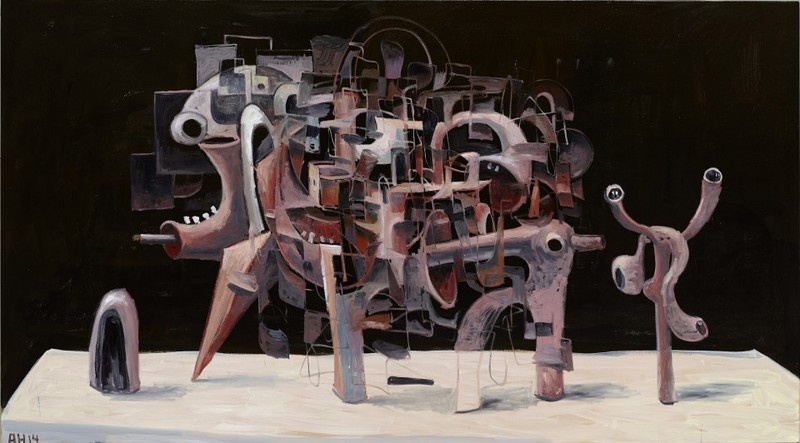 “Just as we need an opposite in order to develop a consciousness of our own self, borders are best tested by something or someone rubbing against them, as in an itch that gives us a consciousness of the skin we are wrapped in.” Carlo McCormick
Anton Henning, in his pictures, creates liveable spaces. Intertwining lines coalesce into surreal creatures, merge with sculptural portraits and nude drawings, that fade into decorative contours. Canvases, wall paints, light or furniture, the Henning universe knows no boundaries and casts an immediate spell of creative frictions and irritations over the observer.

Magritte‘s dainty clouds, Picasso‘s cubistic forms or Duchamp›s machines are insolubly entwined in Henning‘s world of images. However, the artist quotes his predecessors not merely in the spirit of nostalgic repetition of things seen before. Rather, they are taken apart bit by bit, quite blatantly mixed up and reassembled in a very Henningian way, not without irony. Coming up against each other, they reveal new contexts, a similarity, a difference, or a surprising realisation. With his work titles Henning too creates amusing confusion. On the canvas, funnels and pipes twist and turn. They remind us rather of a physical test assembly than of a portrait, as the artist calls one of the works. Yet thanks to this classic genre label the lines and holes suddenly turn into gaping mouths, with bared teeth, and staring eyes. Through the categorisation, the abstract line becomes animated form. But every recognised vitality, before the next still life, appears to dissolve in its petrified fragmentation. For doesn‘t it show very similar structures as the portrait? How do I see and comprehend (see and comprehend art)? Not only our dealing with art and history is reflected on here, but seeing itself becomes the subject.
Through the gel-filled cushion of one of the sculptural benches a collage of drawn female nudes becomes visible whose execution combines the realism of Courbet with the frivolity of a pin-up. Classic and kitsch come together here under the heading of the Fall of Man, while Eve herself begins to smile and picks the apple from a «Hennling» (the three-looped form that from the beginning has served the artist as an inextricable element of the abstract-absurd). Faced with this complexity, we almost forget: this is and remains an item of seating furniture. What remains unclear, though, is whether we should sit down or keep a proper distance. The question comes to a head here that Henning has always been confronting us with: where is the difference between life and art, between reality and representation? Behind every corner, in Henning‘s oeuvre, we come across new stumbling blocks, inviting us to pause and think for ourselves. Ideally, we may assume, the artist would like those questions to be followed by a heated debate that once more fills the clinical halls of the white cube with the energy pervading his pictures.

The Bob van Orsouw Gallery is pleased to present already the fifth solo exhibition of artist Anton Henning, born in Berlin in 1964.

Anton Henning‘s works are to be found in numerous public and private collections worldwide.
www.bobvanorsouw.ch