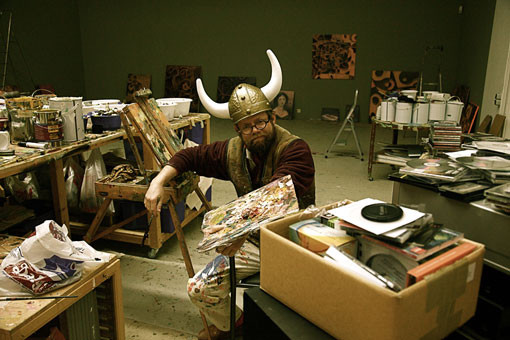 Anton Henning, Studio view
With the exhibition “Homesick”, Anton Henning (1964) is staging his third solo exhibition in our gallery. Henning’s love of the provocative semantics of his titles has already been evident in the past. Thus in 2004 the artist presented “Eleven Almost Impeccable Paintings” in our gallery rooms and in 2006 the multi-level installation “Westwards roam the eyes; eastwards coasts the ship.” Also with the new exhibition title, “Heimweh” / Homesick, the artist opens up a whole range of associations.

Closely allied to the exhibition title is the term “homeland” which to him means not just a geographic and historic entity, but a place of identification. Under this term he incorporates his studio just as much as the white canvas. And in fact even painting itself can turn out to be Henning’s own country, like the sea to a sailor. In addition, homeland is likewise understood as a non-location, as the utopian construct of a subjective reality in the form of an emotion or a longing.

Henning cites the complex meaning of the term homeland with just as much gusto as he breaks down the concept of painting, namely, by helping himself to a variety of media. Sculptures, wall paintings or furniture evolve from the spatial extension of painted compositions. In analogy to this, painterly phenomena are translated into the moving pictures of short films. As in any autopoietic system that permanently generates and organizes itself, Henning creates allusions within his own work.

Thus, for example, the trefoil shape, alias “Hennling”, which crops up in his pictures as a basic invariant, is expanded three-dimensionally to a sculpture. The artist then sets this trefoil into a landscape as the means to a photo work and allows us to draw our own conclusions about his (landscape)painting. The same takes place with the forms that Henning draws onto the icy surface of a frozen lake. These are reworked cinematically and can be understood as a self-referential allusion to his portraits, interiors or still lifes. However the artist does not leave it solely to postulations that paraphrase his oeuvre, but goes back to the roots of Modernism. In so doing, he does not actually use quotations, since his critical setting-himself-into-relation to already existing pictures is not based on any discursive or formal interest. It is rather the fact that he expresses a longing to find his home in an artistic utopia in which the ideal picture can be generated from the unremitting combination of his own and other picture worlds.