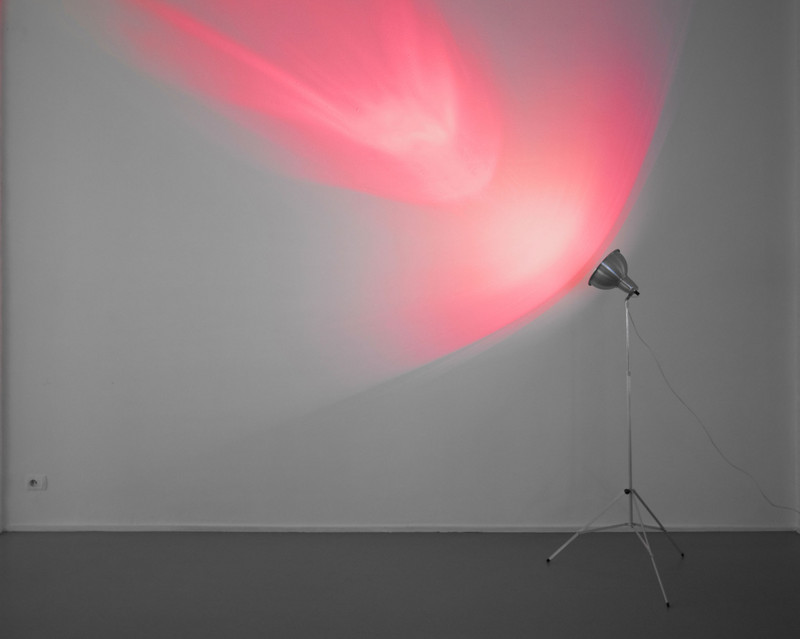 Selected sculptural objects by Ann Veronica Janssens, Werner Feiersinger, Navid Nuur and Gabriel Kuri launch a discourse that explores and questions Modernism‘s formal idioms and ideological background, and attempts to enact continual re-positionings, discontinuities and changes of perspective. Based in Belgium, the Netherlands, Austria and Mexico, each of the four artists has developed his or her own strategies to address, elaborate and unflinchingly undermine traditional categorizations.

Ann Veronica Janssens frequently works with narrowly delinated motifs positioned with great precision in order to throw the spectator back onto their own resources. The Belgian artist‘s minimalist projections, installations and sculptures create sites that capture light. In our show Janssens presents a light sculpture that diffracts light in such a way that it appears to materialize. Another sculpture resembles an aquarium. Filled with water and oil, it produces various reflections. Janssens‘ use of light is occasionally intended to de-stabilize existing matter. She achieves this effect, which tends to occur in the spectator‘s perception, by literally immersing her objects in gold.

Austrian artist Werner Feiersinger‘s work pays homage to Minimal art and Modernist architecture. The artist often merges his minimalist approach with figurative motifs from the fields of architecture and design. Forms that have jettisoned the burden of metaphor encounter a wealth of associations embedding his objects in a web of connections to the history of art and architecture and to his personal experience. Wolfgang Kos, Director of the Wien Museum, has described Feiersinger‘s works as „austere Post-Minimalism with narrative disturbances“. His somewhat flippant diagnosis perfectly captures the humorous note that imparts an airy lightness to Feiersinger‘s sculptures.

Navid Nuur lives in The Hague. Most of his works are interventions done in humble materials or unspectacular locations. For example, he inserted a magnet into a piece of rock and sprinkled metal dust onto its crown where it accumulates in crystalline formations. In every installation the sculpture changes its shape and eventually begins to rust. Nuur often concerns himself with intermediate spaces in the real world. In a recent interview, the artist noted: „My works are not sculptures; they are always inbetween mediums. They are like modules that I can assemble.“ Paying homage to the in-between, his works oscillate between concept and realization, design and chance, beauty and failure. Nuur‘s dialogic approach playfully disupts traditional notions and hierarchies.

Some of the minimalist steel sculptures by Mexican artist Gabriel Kuri subvert entrenched notions of the immutability and adequate utilization of a work of art. At the 5th Berlin Biennale for Contemporary Art in 2008, for example, he presented a sculpture intended for use as a coat rack for the numeours visitors of the Neue Nationalgalerie. Other artworks by Kuri are composed of humble materials the artist encounters in our consumer society. For our group show he has aligned three fire proof bins inside a working freezer. We also feature a collage of cut-outs of cash-packaging paper for different currencies, neatly pasted to form a kind of personal taxonomy. In his carefully composed works the artist reflects on the economic system that underpins our societies; his idiosyncratic metaphors carry a decidedly critical undertone.
www.bobvanorsouw.ch