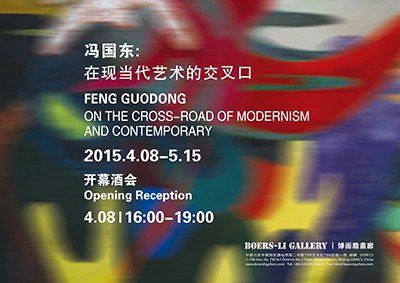 Feng Guodong (1948, Guangdong–2005, Beijing) was one of the most idiosyncratic artists of a generation that was active outside the official Chinese art world in the 1970s and 80s. Gifted with a strong talent, a courageous attitude and a clear feel for the times, he developed a unique body of works, including oil and ink painting, sculpture and drawings.
Feng was known to the official art establishment as well as unofficial groups such as of the No Name Group and the Stars, but did not participate in any of them, making him one of the most, if not the most independent artists of those roaring times in which Chinese Contemporary art first sprang into being.

Feng Guodong’s solo exhibition “On the Cross-Road of Modernism and the Contemporary”, which presents works spanning a period of 40 years, focuses on his experiments in the turbulent years from the mid 1970s to the late 80s.
Educated within the strict confines of Social Realism, he was one of the first to find a successful means of escape, which he did by following “modernistic” trends such as Impressionism, Expressionism, Fauvism, Cubism, Surrealism, and later on in the 80s by participating in the most liberating movement of abstraction. During these years he developed an outspoken personal “style”, which is characterized by its use of unconventional techniques, color spectrums and visual language that even in the late 1970s contained non-figurative elements. Avoiding any form of convention, even in his own development, every work became a new project to accomplish. This gave his work its almost postmodern, contemporary character.

His participation in one of the first “independent” exhibitions at that time, the New Spring Art Exhibition in 1979, and his article in defense of the new movements in 1981, positioned him in the middle of the artistic discourse, particularly through the harsh, conservative criticism he received from the establishment as a result. In those turbulent years he came closer to other experimental artists of the day, such as Ma Kelu, Wang Luyan and Zhang Wei, who had attained remarkable results through abstract, action painting. It is from this intense and fruitful collaboration that his series of abstract oil and ink paintings came into being. Ten years after his influential participation in the New Spring Art Exhibition, he installed his work Alarm Clocks in another defining show, the China / Avant-Garde Exhibition, organized in 1989 at the National Art Museum of China. With these works and the others that came before, Feng Guodong demonstrated his highly politically engaged awareness.

In the 1990s and the first years of this century, Feng Guodong made an extensive series of human figure related sculptures and – during his illness that ended his life – self portraits, which form a powerful document not only about himself but also humankind as a whole.

Feng Guodong’s work is represented in the collections of institutions, including the M+ Museum of Visual Culture in Hong Kong and Ordos Art Museum.
www.boersligallery.com/