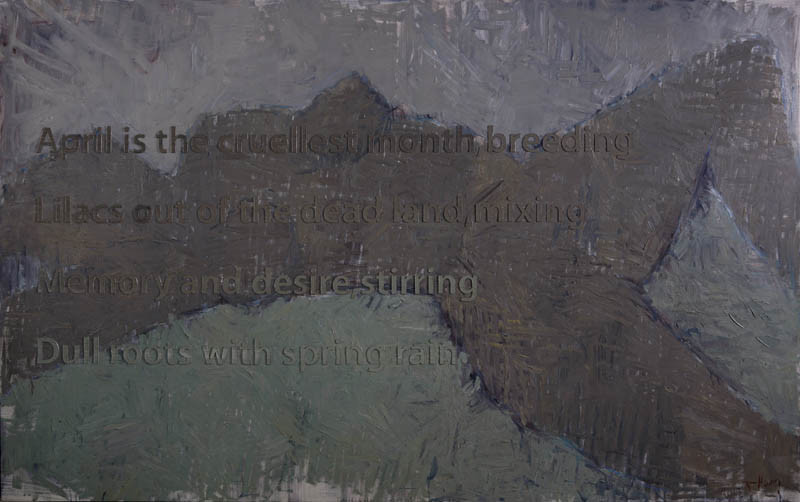 Boers-Li Gallery is pleased to announce the opening of Huang Rui’s new solo exhibition, The Waste Land Series 2011-2013, on December 7th, 2013. In this exhibition, Huang will exhibit a new series of paintings made between 2011 and 2013 based on the American-British poet T.S. Eliot and his poetry.

Huang Rui was a leading figure in the avant-garde political artist group, Star Society, established in the late 70s and early 80s to use art to promote social ideologies and advancements in China. Before his involvement in this group, Huang was one of the founders of underground literature and poetry magazine Today with Bei Dao and Mang Ke. As Huang once said, poetry was a way to express himself when expression in the form of painting was unavailable. Canvas and paint were scarce and expensive in China during the 1970-80s, so when such materials were unattainable, Huang resorted to pen and paper as an equal form of art. This interest and attention to language and poetry extended throughout his artistic career and contemporary works.

He has previously worked with puns, phrases, idioms and manifestations, painting them on symbolic and descriptive backgrounds as a comment on the contemporary socio-political environment; but unlike the politically charged works before, this new Waste Land series comes from a more imagery-based root. T.S. Eliot’s poems are illustrative to provide readers a clear image of the scenes described; Huang picks out excerpts that are particularly important to him, puts brush to canvas and paints his direct emotional response as they effervesce from the words. The resulting imagery is rich in expression and texture, with a consortium of colors layered on top of each other, reflecting the complex structure, content, and theme of Eliot’s poetry.

Although written almost one hundred years ago, The Waste Land is still topical in its theme, especially when compared to modern day China. T.S. Eliot wrote the poem in 1923 in England, when the country was just coming out of a turbulent time and the shadow of the Great War. It was a time of uncertain optimism, for the relief of peace and for the unknown of the future—words that may also be fitting for the current state of China. Three decades after the Cultural Revolution, three decades of economic growth and prosperity, yet the country’s future is still looming with anxiety and concern. Eliot’s disconcerting prophecy in the poem, the strange description of spring as the “cruellest month” (1), and Huang’s dramatic use of color and wild brushstrokes depict a similar state of mind one century apart.

More than Eliot’s poetic talent, his life is also interesting to the artist. Eliot was born in the United States to Anglo-Saxon parents, but from an early age he had the urge to return to his mother-country and be reunited with his homeland, something Huang shares in common with Eliot—he also lived abroad for many moons before returning and settling back where he came from. This situation is portrayed in a group of works called Flag where Huang paints the poet’s words on top of various colors of the national flag of the United Kingdom, each color symbolizing a different aspect of the autonomous nation and being: Red for its tradition, blue for its freedom, and white for its symbolism.

In one clever stroke, Huang Rui brings together imagery, language, and colors together in this exhibition, summarizing the contemporary society and its relationship with nature, humanity, and the bustling cityscape with Expressionism, key words, and poetry.
www.boersligallery.com/