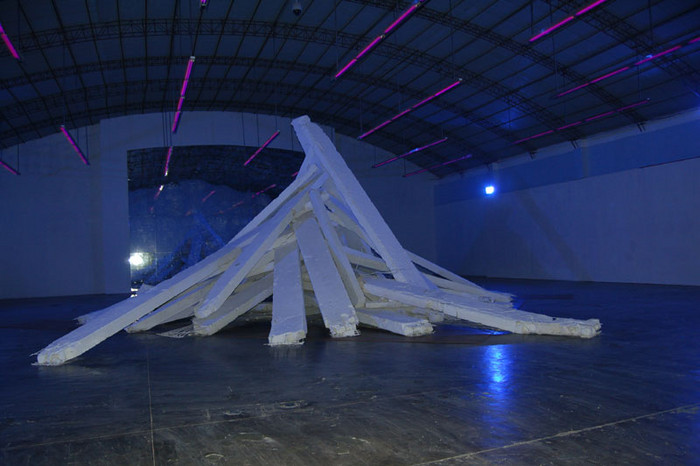 Borges’ search for the legendary “blue tiger” eventually led him to a village in India.Although the villagers told Borges all sorts of information regarding the appearance and disappearance of the famed blue tiger, Borges discovered “there was a suspicious regularity in the way the villagers seemed to take turns spotting it.[His] arrival upon the scene of the sighting invariably coincided with the precise instant that the tiger had just run off.”
In spite of the villagers’ efforts to dissuade him, in search of the creature Borges climbed up the mountain in the dense forests around the village.In a shallow crevice he saw a blue round stone that was precisely the color he imagined in his dreams to belong to the blue tiger.He later unexpectedly found out that the rumored blue tiger was in fact this blue round stone.Because the stone was an object of holy worship, the villagers declared that “the summit of the hill was sacred, [and that] magical obstacles blocked the ascent to man.”
The blue tiger is not only a blue stone, or a blue stone possessing magical powers, but most importantly the pure product of people’s imaginations.From generation to generation it is the pillar of the villagers’ lives.With this type of spiritual and culturally engrained story, it is unimportant whether or not the story is true.In order to uphold the myth, villagers tell the story multiple times advancing its dissemination all the while preserving its secretive and mystic aura.
Throughout Borges' entire body of works he never ceased his research of tigers, description of tigers, and in all respects revealing his love and worship of the tiger.Borges’ interest in the tiger comes from its symbolic meaning and brute force; even more important for him is the power and ability of these symbolic meanings, and the human desires communicated through them.Borges himself thought, “since nothing is impossible for me, then let’s create a tiger.”Although in his life he never fulfilled his wish of a face to face encounter with the “blue tiger” perhaps “go create a tiger” is an expression of each person’s hidden aspiration.
In UniversalStudios, Liu Ding has created an immense landscape - a landscape "tiger" of ambition and desire. This exaggerated landscape which towers over seven meters, and is ten-meters wide at its base is composed of recycled concrete beams.The beams, part of the original fabric of the city, are relics from demolished buildings.These basic building blocks of the city are testimony to peoples' continuously expanding desires and ambitions.
Concrete allows people to achieve their vaulted ambitions, and also can destroy people's fragile dreams. Social norms, moral standards, power, and people's various desires and pursuits are all subjective creations which are the manifestations of lies and myths constructed of reinforced concrete beams.
In the era of neoliberalism, needless consumption is a prominent feature. Art itself is a resource of a consumer society.When a society develops to a certain point, only then can there be a space for this type of "consumption", and consumption itself therefore becomes a measure in an index of national development.
Liu Ding moved over thirty beams weighing ten tons to into the exhibition space, this action itself is a comment on resource consumption.He has meticulously cleaned and whitewashed these concrete beams purchased from the construction sites of demolished buildings.Running counter to pragmatic usage, this treatment of the concrete and its random assembly in the gallery space resists its intended use.
In the exhibition space, through the artist's determination the tiger finally appears; against all expectation,his appearance is calm, low key, so much so that it is incomplete and all that is left is a tiger skin.The front half of the tiger skin is buried under the concrete mountain and all that is exposed is the back half.This tiger skin once belonged to a brave and fierce tiger, the king of the mountain, the golden tiger, a literary metaphor and here in this incarnation it becomes a part of an artistic language linking the real warm blooded tiger and the symbolic tiger together.
Filling the space with blue lights the enormous white concrete structure is wrapped in the light which creates a ghostly calm reinforces the mystical and dreamlike status of this king of all beasts. Liu Ding's "The Tiger" uses a large quantity of 'waste' to construct a landscape.This large-scale project stems from the artist's consideration of the abstract powers that control the world and also objectifies our worldview.
www.boersligallery.com/