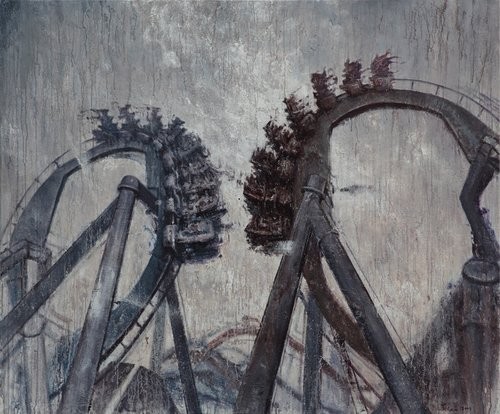 For its first exhibition of 2010, entitled "Trailer," Boers-Li Gallery presents seven artists currently reacting to the psychological realities and carrying out a “transformative enactment” of contemporary Chinese society. Boers-Li Gallery is pleased to announce that artists participating in this exhibition, on view from 20 March through 11 April, will include Hu Xiaoyuan (born 1977, based in Beijing), Ji Lei (born 1972, based in Chengdu), Liu Chuang (born 1978, based in Beijing), Qiu Anxiong (born 1972, based in Shanghai), Qiu Xiaofei (born 1977, based in Beijing), Yang Xinguang (born 1980, based in Beijing), and Zhan Rui (born 1980, based in Wuhan), all of whom will present works from their latest series. The pieces exhibited will not only offer a preview of their artistic development and production in the years to come, but also attempt to reveal the similar points that began to emerge in their practices over the last year, most notably a transition from annotations on Chinese social symbolism to a new focus on the delicate relationship between psychological reality and the social reality of individual existence within contemporary Chinese society. Over the past ten years, Chinese artists have experienced the accelerated operation and ultimately bubble of the global political and economic system, a compelling array of temptations and cruelty. Like the undulations and reverberations of a roller coaster ride, a genuine attempt to face that contextual environment actually confronted them with a number of strange everyday situations. This alienation of the everyday environment has come to play the role of a clue or residual artifact in artistic production: connection both between reality, history, and psychology, and between visual metaphor and behavioral treatment. All of this seems to offer an oblique perspective on the now-ending first decade of the twenty-first century, just as Chinese contemporary art is beginning a difficult first step in a new direction.

Qiu Xiaofei and Liu Chuang reveal the two extremes of the relationship between the individual and reality: schizophrenia and amnesia. Qiu Xiaofei's perceptual world is that imagined by someone suffering from schizophrenia, a world that cannot be reconciled with the real world.

Brilliantly colored grids may be filled with poetic meaning, but they come from the patterned walls of a mental institution. Their original purpose was to form a type of psychological terror, but they also recall the everyday psychological pressure of ordinary tall buildings. All of this imagery represents the unique meanings inferred by mental patients in certain images, functioning as a merciless reminder of the reality of life for the artist. Liu Chuang, on the other hand, presents photographic documentation of a performance project that attempts to prepare a system of lists and settings for the tasks of everyday life for a friend suffering from amnesia. The artist places folded pieces of card next to certain objects, hoping that when the objects are moved, the cards will also fall down. Even if a gust of wind could knock the cards flat just as easily, the system creates traces of everyday life on the blank slate of memory—even if those traces are not worth remembering at all.

Another component of the exhibition consists of imagery derived from subjective imaginations of the real world, as in Qiu Anxiong's photographic work “Let Me Forget It All,” in which light boxes of varying sizes portray the landscapes of reality. But the veracity of these landscapes is invaded and disturbed by the figures of animals and humans inserted into the images—then again, who is to say that it would be impossible for these innocent animals to actually appear in such absurd situations? These wild dreams of reality are not necessarily always refractions of insanity, sometimes even giving off a feeling of tranquility. Hu Xiaoyuan's video work “??” expresses the writhing of living things in a dimension with neither space nor time, the exuberant organic motion generally generating a feeling of disgust. The video actually documents the behavior of something like a silkworm cocoon in a soft, smooth package, trying its utmost to struggle through a process of immense difficulty. In the artist's “psychological reality,” the energy of the accumulation of psychological experience is released into eternally repetitive motion, hoping to realize escape through meaningful action and achieve physical and mental redemption. The same redemption or escape surfaces again in Ji Lei's amusement park, in which the excitement delivered by a revolving roller coaster successfully offers a form of happiness that eliminates the present for those participating. The amusement park is superficially industrial, functioning as a garbage dump for metropolitan emotional waste to some degree; what attracts us here is the confrontation between the pleasure of the moment and the eternal desolation of emptiness.

On the question of everyday behavior and the attempt to position the mind, Zhan Rui and Yang Xinguang meet unexpectedly on a similar territory, engaging in a cleansing process of expression and description. By dismembering the existence of everyday life, the remaining petty elements are systematized and a space for the self is found. Zhan Rui attempts to return the changes of the weather, which once offered boundless material for the poetic imagination, to the status of shriveled geometric figures by keeping daily emotionless records and portrayals. Ultimately, the original poetry is transformed into hand-drawn pixels and cold abstraction. The artist never indulges in the use of various forms to elucidate those elements of life that the self cannot master, but rather uses monotonous graphics to record nature or society, cautiously marking the changes and demarcations of the manifold things of this world—a category that includes the artist himself. At the same time, Yang Xinguang's work painstakingly avoids direct both description of the petty elements of daily life and discontent with the poverty of life. The material of “Treetops” comes from the very tips of tree branches, appearing as a nonessential bit of matter that connects the wood of the tree with the empty sky and playing a subtle role that shows off poetically in the wind. The resulting experience is that of a lowly sense of self-will coupled with a method for expression and existence—a point that captures the common artistic spirit of the exhibition as a whole, perhaps best expressed in the ancient Chinese saying that describes a snake hidden in the grass, camouflaged but revealing a section of its tail that acts as a hidden clue or “trailer.”
www.boersligallery.com/