Xijing Olympics: An Exhibition by the Xijing Men Collective 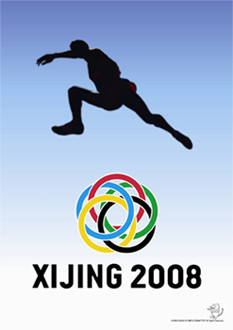 XIJING OLYMPICS: AN EXHIBITION BY THE XIJING MEN COLLECTIVE

Boers-Li Gallery is pleased to announce that our gallery showcase space will feature a group exhibition by the Xijing Men, consisting of Chen Shaoxiong, Gimhongsok, and Tsuyoshi Ozawa and their families, during the period of the Beijing Olympics in August 2008. Entitled Xijing Olympics, the three artists will enact their own version of the games in Caochangdi to run parallel to the better-known events in central Beijing.

In a remarkable series of coincidences dating to one year ago, each of the three artists encountered the concept of Xijing (that is to say, a western capital to accompany the eastern, northern, and southern cities of Tokyo/Dongjing, Beijing, and Nanjing). The artists have since elected to rebuild their imaginary city in a series of five projects, the first of which was a video installation that screened in Beijing, Guangzhou, Seoul, and Ireland.

For the second phase of their project, the artists will personally organize and engage in 21 Olympic-style, sport-themed competitions with occasional assistance from their family members. They include, for example, a football game with a watermelon, a marathon in the subway, and a boxing match while the players are being massaged.

The artists, who have pledged their earnest daily participation in the event, have decided not to recognize any winners in any competitions. Instead, they will emphasize modesty, simplicity, intimacy—the precise opposite of the Beijing Olympics.

There will be limited opportunities for media viewing during the event. Please contact the gallery for arrangements.

Let the world understand Xijing, and to let Xijing go out into the world!