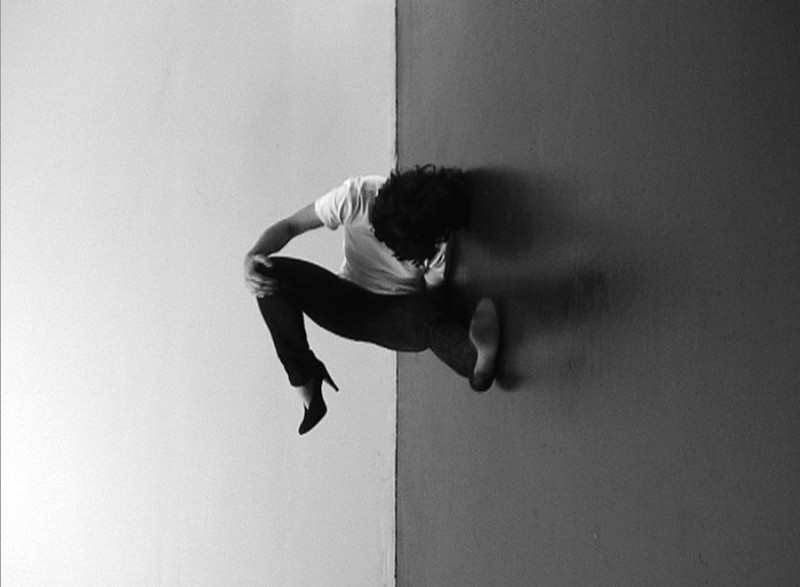 © Alexandra Bachzetsis
This Side Up, 2007, in collaboration with Julia Born, Videostill
Courtesy the artist
ALEXANDRA BACHZETSIS AND CLAIRE HOOPER
22 February - 25 May 2014

Contemporary pop culture as expressed for example in R&B occupies both ALEXANDRA BACHZETSIS and CLAIRE HOOPER in their works. While BACHZETSIS deconstructs in a rather analytical manner, HOPPER employs its inherent seductive aspects for her own purposes. The artists explore the increasing significance given by social media to the staging of “personality” and “life.” In her videos, HOOPER combines contemporary destinies with plotlines from Greek mythology while isolates gesture and body language visible in club culture and music videos in her performances. A dialog about the body and its representation in the media as well as its physical and social limitations develops between their works. The artistic practice of each artist run behaves contrary to classic exhibition traditions: BACHZETSIS develops her pieces, mostly performances, as a choreographer and dancer and appears in theaters as well as exhibition venues while HOOPER presents her films both at film festivals and exhibitions for which she often creates separate presentation architecture or situations.

ALEXANDRA BACHZETSIS is active as a performer and choreographer, appearing with her pieces for example at the Theaterhaus Gessnerallee (Zurich), the Tanzquartier (Vienna, 2010) and the Theater Freiburg. She was also represented at the Fondation Beyeler (Basel, 2013), the Chisenhale Gallery (London, 2012) and at Documenta 13 (Kassel, 2012). CLAIRE HOOPER, who dedicates herself largely to the medium of film, has already been represented with her works at numerous festivals, for example the International Film Festival in Rotterdam (2013) and the Kunstfilm Biennale in Cologne (2010). Her works have been shows at exhibitions in the ICA (London, 2012), the Serpentine Gallery (London, 2012), Lothringer 13 (Munich, 2011) and MUMOK (Vienna, 2011), where she was presented the Baloise Art Prize. The exhibition at the Bonner Kunstverein is her first wide-ranging presentation in Germany.

BACHZETSIS’s works do not tell stories but depict instead the controlled movements of bodies following a clear sequence. Situations are evoked—a dance scene in a club, everyday actions of a woman at home—that condense as reflections of the contemporary media culture into studies of motion by means of mirroring and repetition. The artist deconstructs this sequence of events by isolating gestures and body language from the flow of the familiar as signs of cultural codes and making visible in this way corresponding attributions of value. BACHZETSIS equally analyzes the mechanics of TV soaps and hip hop video clips as well as forms of classical ballet, modern dance and performance art.
On the occasion of the opening, BACHZETSIS and ANNE PAJUNEN (b. 1985 in Helsinki, lives in Brussels) will perform A Piece Danced Alone (2011). This work for two dances is based on a sequence of solos that are handed on from one to the next. BACHZETSIS is particularly interested in repetition and, as a consequence thereof, the mirroring and overlapping of two persons, thus triggering uneasiness in the viewer. Over the further course of the exhibition a recording of the performance will be shown adjacent to the scenery consisting of spotlights, dance floor and cathode ray tube.

In Rehearsal (ongoing) (2010) as well, the true action and its video documentation overlap each other. BACHZETSIS consequently does not solely isolate sequences of movement linked to the body in her choreographies but moreover the circumstances in which the movements are viewed as well.
In This Side Up (2007, in collaboration with Julia Born), the artist explores the spatial perception of choreographies, documentation and notations. The video documenting the choreography is tilted and rotated, thus broaching the theme of the viewer’s spatial perception. Next to it, BACHZETSIS provides instructions on a poster that integrates the viewer as a protagonist.

In CLAIRE HOOPER’s works, the British tradition of documentaries encounters elements deriving from Greek mythology. Her epic films focus on figures in precarious social circumstances and their entanglement in restrictive systems that are converted into collective social areas through parable-like, mythological enhancement. Interchangeable elements from everyday life recorded in the narration in documentary fashion oscillate kaleidoscopically with theatrically charged passages in which the performance appears like an incursion into reality. For HOOPER as well, pop culture plays an important part in the staging of her figures. She depicts the body—gestures as well as bearing—in seemingly surreal dance performances that enable her to portray the irrational and also the compulsive forces that continue to drive our well-organized society in power images and sounds. While BACHZETSIS broaches the theme of physical boundaries HOOPER sounds out the social limitations of the individual figure. Both artists depict the body and the figure as shimmering, constantly changing projection surfaces.
The reference to antiquity in HOOPER’s works is not only thematic but also structurally arranged. In the video Eris (2011), a rapper assumes the task of the narrator and reveals the tragedy of the story through song before the actual performance has begun—similar to the chorus in Greek theater. The images show the fate of a young mother who fights to retain custody of her son and is in the process exposed to diverse forms of violence. She overcomes the conflicts by regularly transforming herself into Eris, the goddess of strife.
In Nyx (2010), named after the goddess of night, we accompany a young Kurd in the Berlin subway who is going home after a long night. In a state of delirium he encounters the figure of Thanatos, the god of death, his twin brother Hypnos, the god of sleep, as well as Pasithea, the goddess of relaxation and hallucination. Numerous cultural conflicts involving adolescents who have been brought to the West become visible in the subway that mutates into a kind of underworld.
She designed structures for the exhibition that simultaneously function as projection surfaces and architectural ornamentation. Referencing the seats from the Berlin subway, she creates a link between the actual exhibition space, the illusionistic space of the film and its documentary illustrative function. In doing so, both HOOPER and BACHZETSIS broach the question of the exhibition and perception dispositif.
www.bonner-kunstverein.de