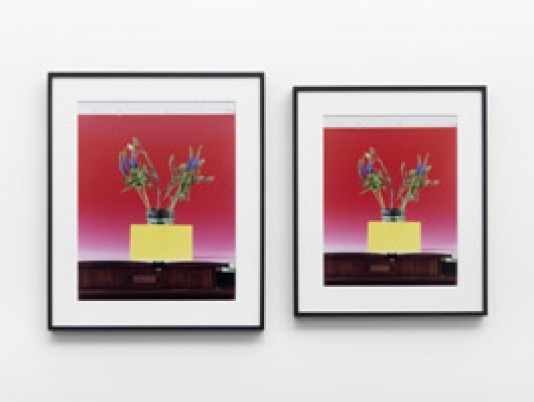 The double exhibition with Annette Kelm (*1975 in Stuttgart, lives in Berlin) and Michaela Meise (*1976 in Hanau, lives in Berlin) takes as starting point for this experimental format a dialog between friends on art. Although Meise works mostly three-dimensionally, Kelm on the other hand photographically, they share an interest in questioning what is a picture and its status. Their project for the Bonner Kunstverein developed from this common ground.

The exhibition “Hallo aber” proceeds from different kinds of images that have been shaping the background of the interchange between these artists. Viewers will not only come across a Gainsborough painting, but also record covers or paisley scarves: pictures possibly taken from postcards, magazines or found in local libraries. Reflecting about possible ways to deal with images in the vast exhibition hall, the artists decided to bring in an outside stylistic medium that had caught their attention in Bonn’s public space. They handed over a selection of found pictures that they had assembled in their studios to Carsten Carstens, the Bonn billboard painter. In this collaborative working process, Kelm and Meise do away with the classical question as to an individual’s hands-on contribution. They leave the picture material to someone else to be transferred to Kunstverein’s gallery walls. In doing so, they obliterate the traces of their own practices, at least at first glance, and treat the entire exhibition hall as one picture plane that displays a transitory constellation. The heterogeneous character of the found pictures is leveled to a uniform state by the handiwork of a third party. The choice of billboard painting as a medium underlines the arbitrary and transient dimension of these pictures which, at the end of the exhibition, will be painted out.

The ephemeral component of the show recalls various characteristics of a dialogue. A conversation evolves and changes with each intervention of the participants. It revises its tone and its themes during the course of the encounter and leads to actions or outcomes that were not necessarily present in the dialogue. Recent and older works by the artists are found in a room embedded at the centre of the exhibition space. They partly relate to visual elements in the hall and pursue the artistic dialogue. The arrangement of Kelm’s photographs and of Meise’s reliefs and sculptures generate an underlying echo that develops between the recurring motifs and continues to oscillate in the outer hall. The respective works are displayed as indirect results of an exchange that viewers encounter in the exhibition, which takes over the openness of the dialogical form. As the artists will not stop their exchange with the end of the project, “Hallo aber” can be regarded as the snapshot of an on-going conversation that celebrates the comprehensive and multiple nature of the picture per se.

Besides her professorship at Universität der Künste in Berlin, Michaela Meise has presented her work for several years on an international level (among others at Grazer Kunstverein, Graz; Greene Naftali, New York; Hamburger Bahnhof, Berlin; Kunsthalle Schirn, Frankfurt/Main.). Also Annette Kelm’s works have these past years enjoyed increasing attention and could be seen internationally at solo exhibits (among others at KW – Institute for Contemporary Art, Berlin; Kunsthalle, Zurich; Witte de With, Rotterdam; CCA Wattis, San Francisco).
www.bonner-kunstverein.de