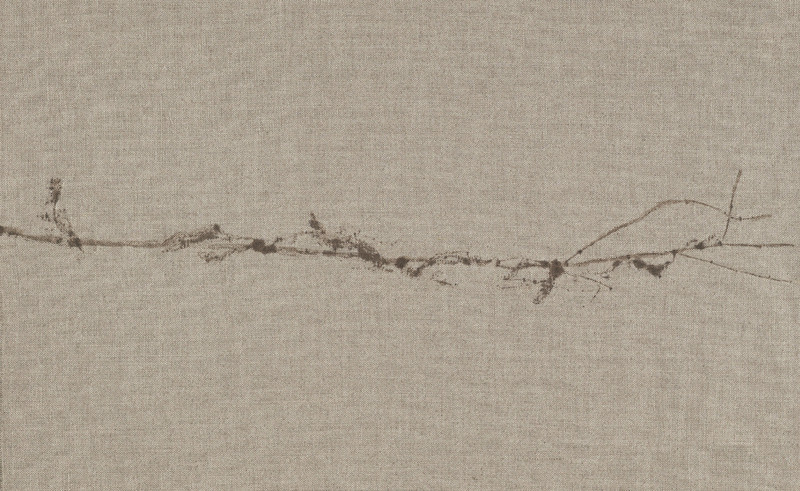 We are very pleased to introduce you to the American artist HELEN MIRRA and her exceptional project, one that is more than just an exhibition and goes beyond a simple collaboration between three institutions. The project was initiated by Bonner Kunstverein. The diversity of geographical zones was the starting point for the collaboration with the two other exhibition sites. Ideal vantage points were sought with the KW Institute of Contemporary Art, Berlin, and the Museum Haus Konstruktiv, Zurich. Starting in Bonn at the transition point between the Rhineland’s Slate Mountains and its lowlands, Zurich stands for its proximity to mountains and lakes, while Berlin represents Germany`s largest city.

The careful selection of the three sites was accompanied by the development of the new group of works “gehend (Field Recordings 1-3)”, based on a 30-days walk each in-and-around Bonn, Berlin and Zurich. The walking is thereby in a symbiotic and differentiated relationship to the series of prints that arise during the walks and are presented as a new work sequence: “...one thing that remains is the works don’t state their walkinghood. Though since they look like nothing I’d ever make in the studio, there is a clue that something else is at play.” (HELEN MIRRA in an interview with Peter Eleey)

The term “field recordings” is normally used for documentary audio takes recorded outside of a studio. Mirra however configures her recordings in the form of prints: every hour she interrupts her walk to search for an object — a blade of grass, a leaf or a twig — which she then paints with ink and presses it onto a piece of linen to make an imprint. Seven prints per day come about in this way; with regard to Berlin, MIRRA in addition did rubbings of the ground or tree stumps. Back in her studio, she arranged, aligned and sewed the single pieces together into picture series or blocks.

Cultural themes and topics from the history of science find their way into her work as do a number of systematic formulas, whether the geometric form and serial configurations, measuring systems, adaptations from cartography or archival classifications. With her field research MIRR takes up the historical strand of nature explorers, such as the ornithologist John James Audobon, who in the 18th century first killed the birds in order to paint them true to life. She derives her method of printing from Japan’s “gyotaku”, a tradition that seeks true-to-life images by inking fish and pressing them onto rice paper. In a chain of art-historical positions that are concerned with principles of nature and systematic order, Helen Mirra takes up a specific position; the practice of artists like On Kawara, Ad Reinhardt or Giuseppe Penone appear as kindred spirits.

This supposed proximity to the documentary may mislead. In fact the artist is in no way interested in viewers being able to recapitulate her walks. The prints, which resemble prehistoric fossil collections, elude any temporality just as much as any idealizing concept of nature.
“Direct prints are facts without much information, dependent on physical contact. [...] So to note, I’m not mapping in any way, that’s the thing about the scale being 1:1. I stepped in.” (HELEN MIRRA in the interview with Peter Eleey)

All the works follow a strict, minimalist approach. Yet as controlled and objective as her ordering systems seem to be, her method is all the more complex and sensitively poetic. Thus each single print unfolds an abstract aesthetic, allows sources of error to become visible that contribute to the quality. Each element points to a larger, more complex system and with its poetic minimalism opens up room for associations in which the small things in nature are animated and mobilize our ethical responsibility vis-à-vis the environment, nature and her diversity. Each element sensitizes us to the tiniest detail, to the existence in the here and now.

At the Bonner Kunstverein, the group of works “gehend (Field Recondrings 1-3)” is supplemented by an additional room whose floor is completely covered with bales of straw. These straw bales represent the oldest element in the chain of the human utilization of natural space. They throw the exhibition visitors back onto their own physical constitution by provoking an unfamiliar sensory experience. The ground under our feet sensitizes us to the fundamental and simple activities of walking, sitting, lying, breathing and smelling.