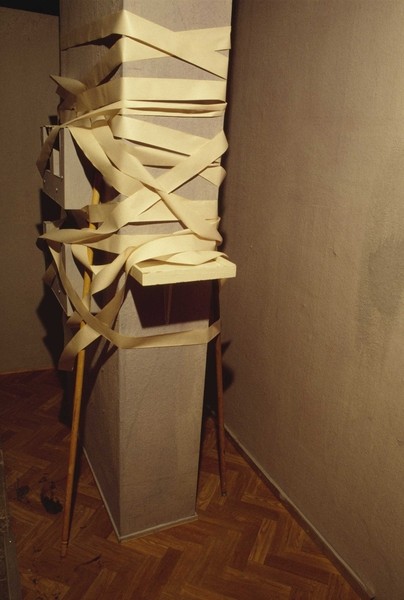 For the first time, not one but two artists have been invited to collaborate in making their mark on the foyer. The two artists living in Munich—LORENZ STRASSL (*1970 in Ingolstadt) and FRANK STÜRMER (*1972 in Bucharest)—have been represented internationally at group exhibitions. The Deichtorhallen in Hamburg recently nominated STRASSL for the “Körber-Foto-Award”; STÜRMER was the prize winner of the 2010 Bavarian Cultural Promotion and is part of the Goetz Media Art Collection. This installation, developed in the close artistic engagement between STRASSL’s largescale photographic works in lightboxes and STÜRMER’s 2-channel video installation, invites the viewer to enter into a dialogue with two autonomous works.

In his photo and video works, FRANK STÜRMER concentrates on mostly quiet, seemingly everyday situations, whereby their combination and superposition lead to a lively synthesis. As is the case in the presentation of the 2-channel video “Ohne Titel (Bicu Sandu)” from 2001-2009. The static setup of one monitor shows the rhythmically recurring wave movements of an oceanic panorama.
Once the viewers’ eyes wander to the right, they witness a strangely appealing singing performance of an almost toothless man who, at a restricted gait, seems to be moving towards the viewer and out of the picture. The German translation of the cheerful lyrics flashed on the screen stands in contrast to the triste, cramped spatial situation and the singer’s gloomy fellow men. The scene is, in fact, that of a psychiatric ward, which has a both ordinary and surreal atmosphere.

Such a concentrated view of a unique and ephemeral time and place can also be found in LORENZ STRASSL’s work. His photo works display staged scenes of household articles—often furniture and appliances—as well as moving elements like fire, smoke or water. Different from what you might expect, these arrangements exist only for the brief moment of the photo shoot and are subsequently destroyed. The three photo works presented at the Kunstverein portray stage-set views of rooms with strange and mystifying arrangements. A chair assaulted by knives, a boat on the vestiges of a bed, a column-like object swathed in bands of paper.

In the wake of the foyer presentations of Michael Bauer, Philippe Decrauzat and Christine Würmell, the foyer will for the first time not be used as a one-dimensional plane in the ‘classic’ format of a mural. The juxtaposition of moving digital pictures by two artists—despite all dissimilarity—will open our eyes to their kindred themes and related means of expression. Similar to Stürmer’s video and its view of the ocean, in which a single small ship vanishing at the horizon recalls civilization, humanity in Strassel’s photo works is, to the same degree, both present and absent. The two works subtly mediate between the everyday and the uncommon and unique.
www.bonner-kunstverein.de