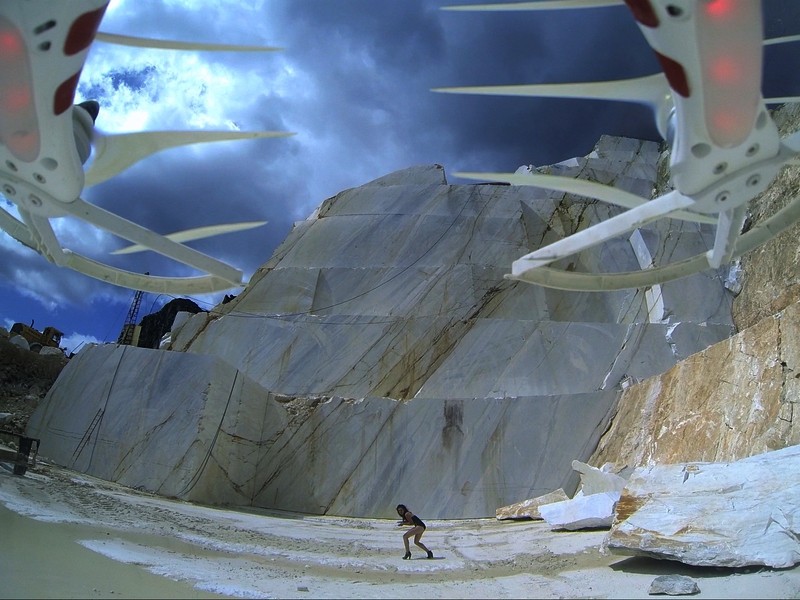 RAPHAELA VOGEL (*1988 in Nuremberg, lives and works in Amsterdam) finished her studies at the Städelschule in Frankfurt a. M. in 2014. The invitation by the Kunstverein constitutes her first major solo exhibition. Her work is located in the meeting of sculpture, video installation and performance and is characterized by an acute study of the relationship of the body to space, closely linked with her utilization of digital technologies (often including, for example: projectors, scanners, action cameras, and drones). The videos, which play a central role in her work, consist of filmed actions (mostly featuring VOGEL herself), documentations of her own installations and collages from her archive of images. These videos then become part of her sculptural constructions where dimensional space, decor and the corporeal merge into an organically woven structure. She treats the projectors and the other technical equipment as active protagonists: for example, by removing their casings or by suspending them in unexpected ways, thus revealing their fragility and somatic character. Ultimately, she creates a hybrid form in which her relationship to space, object, technology and machine is displayed in a dynamic field of motion, from the process of its development to the self-reflective treatment of her own work.

For her exhibition at the Bonner Kunstverein, RAPHAELA VOGEL has created a new video installation that expands into the exhibition space like the skeleton of a dinosaur. Into a structure of metal rods she has placed canvases crafted from an array of materials. Projected videos combine rhythmic sequences of recent and older recordings, resulting in a non-linear narrative in which the viewer moves back and forth through time and space. Other works deal with the exploration of hybrid forms between animal, human and machine, letting us plunged in the exhibition Raphaela und der grosse Kunstverein like in a futuristic fairy tale.

RAPHAELA VOGEL has exhibited her work in group exhibitions at Kunstverein Wiesbaden (2015), MMK (2014), Frankfurt, and Neues Museum Nürnberg (2012). She was awarded the DeAteliers grant, Amsterdam 2014.
www.bonner-kunstverein.de