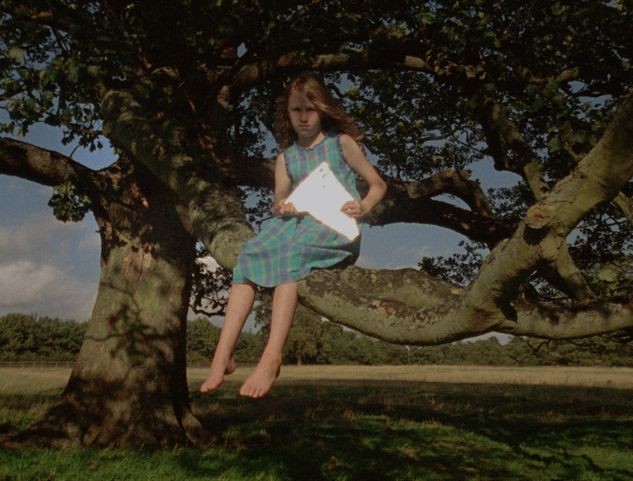 Adrian Paci’s filmic tale takes the viewer to an ostensibly pastoral landscape. At the centre of the film, some children perched in a tree blind the viewer with sunbeams reflecting off shards of glass from a broken mirror. The children had previously liberated themselves from the mirror’s reflection by breaking the glass with a slingshot. Having been captured by both the image of themselves in the mirror and the camera’s focus, the children switch the perspective by directing the sunbeams at the viewer.

With an active imagination and rich imagery, Adrian Paci has created a timeless tale filled with references ranging from Pier Paolo Pasolini’s films to the Bible. A cinema projector, along with the unmistakable sound it makes, are crucial parts of the installation when the film is screened for the public at Bonniers Konsthall.

A simple way of translating Per Speculum is ‘by means of a mirror’. The allegorical film contains references to religion, art history and feature films. Towards the end of Per Speculum, we see the children perched atop branches high up in a tree. They hold the shards of glass in their hands, which they turn towards the camera, blinding us with the sun’s reflection. The tree, an ancient Biblical symbol, has been used in art ever since the Middle Ages, and the film’s title itself alludes to the Bible’s First Letter to the Corinthians.