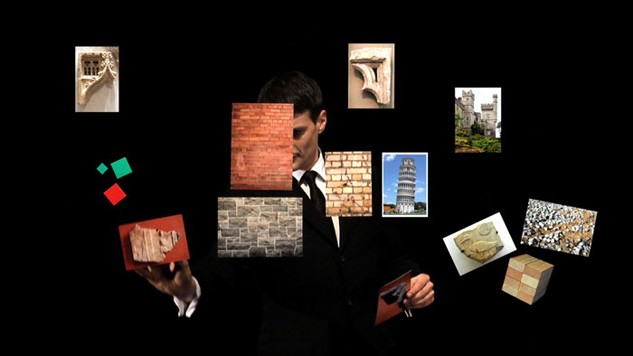 In the video installation Pocket Theatre, Froment has taken inspiration from the magician Arthur Lloyd, who became known as the Human Card Index in the 1930s. Lloyd made a career for himself – in response to requests from the audience – by being able to pull out virtually any kind of printed material from his pocket (in which he kept over 15,000 pieces of paper). Froment shows us a man dressed in black, as Lloyd himself dressed, played by magician Stéphane Corréas, who pulls one picture after another out of his pocket. Family photos and playing cards, film stills and reproductions of old works of art all follow one another in rapid succession. The pictures are spread across the room and appear to float out in front of the man, who arranges them in different groups. All this is accompanied by the sound of drum rolls and whale songs.

Aurélien Froment is interested in the way we perceive the images that surround us, and his works often play with illusions: flattened perspectives, shifting scales, vanishing objects. In Pocket Theatre, he brings together an apparently random selection of images to create new connections and meanings.

The monologue Code Countdown, meanwhile, is based on an interview with French magician Benoît Rosemont. Rosemont talks about magic and ingenious techniques for memorising numbers. He shares his own tricks with us, and reveals the methods of older colleagues. In Stockholm, the monologue will be performed by Swedish actor Johan Holmberg in collaboration with the Royal Dramatic Theatre. During the exhibition, it will be staged both at Bonniers Konsthall and at the Royal Dramatic Theatre.

The video installation is one of a series of exhibitions at Bonniers Konsthall which presents work by artists influential in the field of contemporary art at the moment. This series has previously included Konsthall screenings of films by Salla Tykkä, Adrian Paci and Ann-Sofi Sidén.