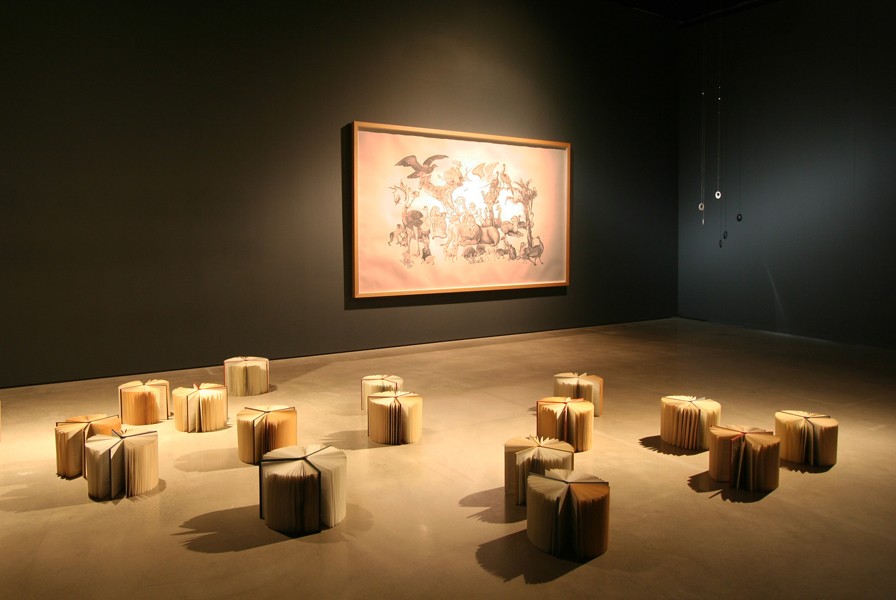 Jessica Faiss contributes to the exhibition with her video installation Smoke, where we follow the movements of a wisp of smoke. Through the use of a mirrored effect, the smoke is doubled, constructing peculiar and abstract patterns вЂ“ patterns which reappear, which transform, which invite the viewer in to get lost. What characterises Jessica FaissвЂTM work is the apparently uneventful, as in Smoke, where a fixed camera records the surroundings.

Jessica Faiss receives the award for her focused, consistent and long-term work with moods and motifs, and for her exceptional ability to bring out qualities of painting through the medium of video. Niclas Г–stlind, jury member and senior curator

Mathias KristerssonвЂTMs exhibited piece Books Joined Together Three by Three comprise books bought from an antiquarian bookshop. As the title suggests, he glued the books together three by three according to cover size and colour. KristerssonвЂTMs work revolves around notions of language and communication, and he is interested in the inadequacies of language which in turn lead to misunderstandings.

Mathias Kristersson receives the award for his subtle and visually poetic tussle with language and for his inquiring and impressively wide range of artistic expressions. Niclas Г–stlind, jury member and senior curator
EvaMarie Lindahl.

EvaMarie Lindahl contributes to the exhibition with her installation Johann, David and I, comprising two drawings and three silver medallions. Through the work, EvaMarie Lindahl delves into her role as an artist. On one hand, she is the traditional artist who creates according to what has been ordered from her. She does this by replicating drawings by 17thвЂ“ and 18th-century artists Johann Melchior Roos and David Tenier. On the other hand, she takes on the role of the contemporary artist, where the idea itself is more important than the technicalities and who the end viewer is. To compliment this role, Lindahl assigned a blacksmith to create medallions which portray her and the two artist colleagues.

EvaMarie Lindahl receives the award for her exceptionally elaborate draughtsmanship that creates an exuberant and teeming imagery where present and past meet. Niclas Г–stlind, jury member and senior curator

The Maria Bonnier Dahlin Foundation awards an annual grant for the support of young Swedish visual artists and artistic work. The Foundation was established in 1985 by Jeanette Bonnier in memory of her daughter Maria. Bonniers KonsthallвЂTMs inaugural exhibition in autumn 2006 presented all previous grant recipients. Since its inception, 60 artists have been awarded grants by the Foundation. Previous recipients include Cecilia Edefalk, Karin Mamma Andersson, Jacob Dahlgren and Gunnel WГҐhlstrand.

This yearвЂTMs grant recipients have been selected from around 200 applicants. The selection has been made by the Board of the Maria Bonnier Dahlin Foundation and a guest jury comprising Niclas Г–stlind, Senior Curator at Г...mells, Paola Zamora, freelance curator, and William Aronowitsch, gallery owner.