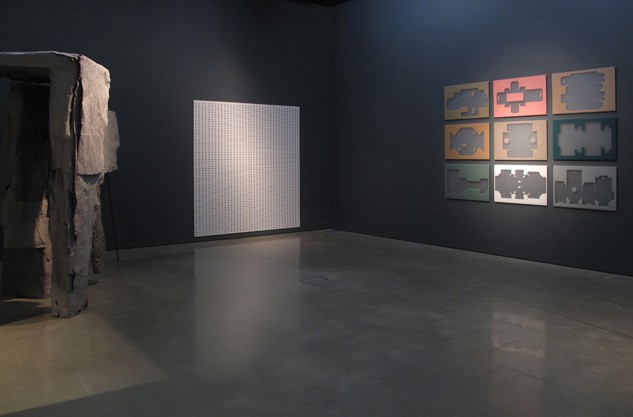 The season ends in our traditional manner, with an exhibition of works by grant recipients of the Maria Bonnier Dahlin Foundation. The 2009 Grant Recipients are Sofia Bäcklund, Kristina Matousch and Viktor Rosdahl.

At Bonniers Konsthall, Sofia Bäcklund shows her works VEGETATING : ACTION : CUT and The Osmosis Work Part One/ Obsession and Necessity/ Clothes On/ Off/ Geographical Circumstances/ Basic Needs. Bäcklund often works in series of sculptures which spread out across the exhibition space, forcing viewers to move around them in order to fully experience them. Bäcklund utilises materials with diverse characteristics, bringing together heavy iron and gossamer-fine paper. Her sculptures evoke a sense of recognition. Drawing inspiration from the urban environment, including traffic islands and underpasses, she also models her work on the masses of possessions one has in their own home. Bäcklund enables us to contemplate questions of number, mass and limitations in a highly concrete format.

In Sofia Bäcklund’s sculptures, minimalism faces off with a coarse, earthy material romanticism that thoroughly rearranges the legacies of Joseph Beuys, Robert Smithson and Eva Hesse. The insertion of a living, yet motionless, human being into these piles of materials shows that the artist is aware that the artwork not only, and self-evidently, represents life. Material can also constitute a barrier to the living; entropy Smithson would have called it. Olle Granath, Permanent Secretary of The Royal Swedish Academy of Fine Arts and Guest-Juror of the Maria Bonnier Dahlin Foundation

Kristina Matousch participates in the exhibition with her works Mass and Volume, as well as the performance Subject in Object, to be performed at the inauguration. Questions regarding the human longing for objects, as well as art as a product, both run like a red thread throughout Matousch’s art. Utilising techniques such as painting, sculpture, installation and performance, she investigates the everyday objects that surround us. Another recurrent feature of Matousch’s work is holes and perforations which are more tangible than the very material surrounding them. The empty space highlights the fact that things actually consist of holes, which create patterns, re-model objects and give new meaning to surfaces which have been eliminated.
...Meeting Matousch, whether it be in the street or at a performance, really does lead somewhere, despite the fact that you end up even more uncertain and confused than before! But your appetite increases, and you say thank you and bow your head, welcoming the increasing hunger with curiosity and good humour! And besides, her gadgets occasionally revolve around the very mystery and function of eating, don’t they? Empty and full, plug and hole, loaded and disarmed. It is Matousch the person and her artistic work functioning as a means of communication... with her idiosyncratic humour acting as a valve between them...Dan Wolgers, Artist and Board Member of the Maria Bonnier Dahlin Foundation

In the exhibition, Viktor Rosdahl is showing his works Songs from the Engine and Shield (II). Rosdahl moves freely between historical references, depictions of contemporary life and perspectives on the future. In his paintings he creates a highly ramified array of thoughts, conjuring up an atmosphere which is ominously absorbing. Traditional linen canvas is replaced by happened-upon materials such as plastic bags, silk or oilcloth. Rosdahl draws inspiration from early Hieronymous Bosch paintings, but equally has an interest in postcards of old Swedish industrial landscapes or YouTube clips of the Chilean folk singer and activist Victor Jara. His pictures reflect a desire to expose injustices in society, and his attention to detail combines the subtle with the brutal.

Viktor Rosdahl’s paintings seem to thrive in the most unexpected places – in the hole in a broken Ikea table top, on a shower curtain or a water-damaged tarpaulin. Out of soot-black, deserted industrial landscapes, paintings in the Old Master style emerge bearing titles such as Wedding Night at SKF, My Years as a Footballer’s Wife and Landing/Shelter for Aniara. In the borderland between the personal and the political, a much-longed-for landing site is prepared for the wandering spaceship of the dream of the welfare state. Cecilia Widenheim, Director of IASPIS and Guest-Juror of the Maria Bonnier Dahlin Foundation
At the beginning of September, work began on selecting recipients for this year’s grant recipients of the Maria Bonnier Dahlin Foundation from amongst the several hundred applicants under the age of 35. The recipients of grants for 2009 were chosen by The Board of the Maria Bonnier Dahlin Foundation, along with a Guest Jury comprising Olle Granath, Permanent Secretary of The Royal Swedish Academy of Fine Arts, and Cecilia Widenheim, Director of IASPIS.

The Maria Bonnier Dahlin Foundation awards an annual grant for the support of young Swedish visual artists and artistic work. The Foundation was founded in 1985 by Jeanette Bonnier in memory of her daughter Maria. Bonniers Konsthall’s inaugural exhibition in the autumn of 2006 presented all previous grant recipients. Since its inception, 63 artists have been awarded grants by the Foundation. Previous grant recipients include Cecilia Edefalk, Karin Mamma Andersson, Jacob Dahlgren and Gunnel Wåhlstrand.