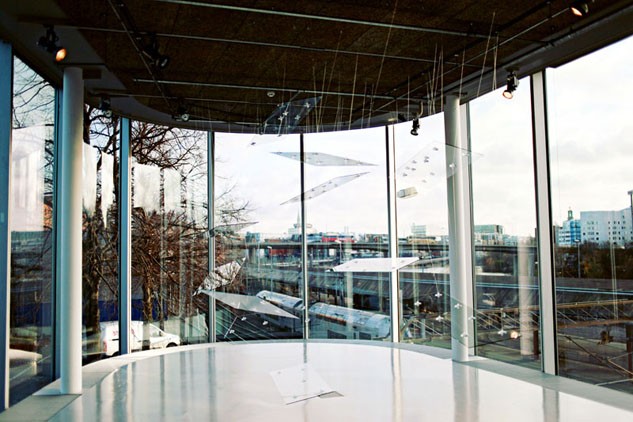 The 2011 grant recipients are Kico Wigren, who fills the Spetsen Gallery with a break-neck glass installation, and Olof Lindström, who experiments with imagery and sound and is the Foundation’s youngest grant recipient to date.

Kico Wigren works with sculpture and has a particular interest in the characteristics of materials. He often works with transparent materials, such as glass plates or soap film, which collect and reflect light. In his installation Gut Feeling, displayed in the Spetsen Gallery, glass plates hover over the floor, suspended from thin lines connected to suction pads. The thin but simultaneously strong glass is securely fastened in place, but one’s gut feeling is that it may break at any moment. Reflections in the glass plates interact with the glass façade of the building, providing an extension of the material. Reflections from the sun spread out over the ceiling and walls.

Kico Wigren works from within the primordial soup. Up bubble sparkling, shining films around the mysteriousness of creation. Heavenly light bounces and refracts between liquid and solid. Dry and wet splinters whirl as primordial sculptures are hoisted and hauled, fall and rise, breathe, live and die. As through a space telescope, but bent into the molecular gruel underneath the skin, fragments after fragments of truths and lies about the inner space are projected out in a three-dimensional, gigantic format.
Dan Wolgers, artist and board member of the Maria Bonnier Dahlin Foundation

Video installations Experiment 2–4 is part of Olof Lindström’s Collection of Experiments, comprising a total of 26 video and sound pieces. The artist describes the works as thought fragments which begin with a sound and are subsequently given a visual expression. In Experiment 4, the sound is manipulated by a camera into various rhythms. In Experiment 2, muffled tones are combined with a triangular colour field. In Experiment 3, the crackling sound leads to an image of a shadow field in black and white.

Olof Lindgren hovers around film, music and painting, if not vibrating between them. Drones. Swings. It’s swinging. In one of his films a camera shutter never stops opening – and never stops closing. The shutter’s either either or or propagates across the display which is charged with loads of clattering shutters. The viewer’s eyes and ears are filled with jingles and jangles; opening up to the rhythm of image and sound, the viewer becomes a resounding, self-swinging, hovering camera, ready to focus one’s senses. Dan Wolgers, artist and board member of the Maria Bonnier Dahlin Foundation

The Maria Bonnier Dahlin Foundation grant recipients are selected by the foundation board along with a guest jury, including William Aronowitsch, owner of Galerie Aronowitsch, and Karin Sidén, Director of the National Museum’s Research, Archives and Art Library Department and Director of Prins Eugens Waldemarsudde Museum.

The Maria Bonnier Dahlin Foundation awards an annual grant for the support of young Swedish visual artists and artistic work. The Foundation was founded in 1985 by Jeanette Bonnier in memory of her daughter Maria. Bonniers Konsthall’s inaugural exhibition in autumn 2006 presented all previous grant recipients. Since its inception, 65 artists have been awarded grants by the Foundation. Previous grant recipients include Cecilia Edefalk, Karin Mamma Andersson, Jacob Dahlgren and Gunnel Wåhlstrand. The 2010 Grant Recipients were Paul Fägerskiöld and Jenny Yurshansky.