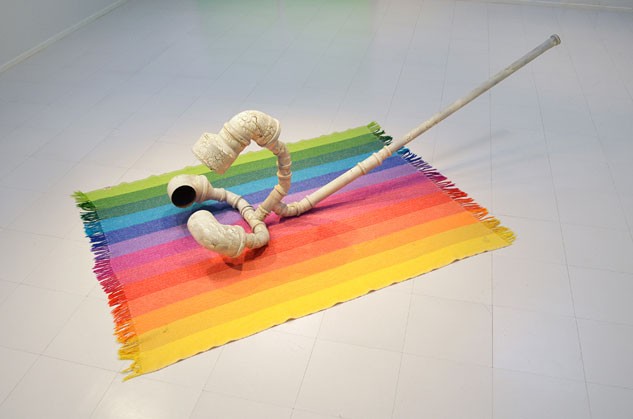 Welcome to the opening on Sunday 1 Dec at 11 am – 5 pm! Free entrence all day. Director Sara Arrhenius presents the grant recipients and opens the exhibition at 1pm.

The Maria Bonnier Dahlin Foundation awards an annual grant for the support of young Swedish visual artists and artistic work. The Foundation was founded in 1985 by Jeanette Bonnier in memory of her daughter Maria. Bonniers Konsthall’s inaugural exhibition in autumn 2006 presented all previous grant recipients. Since its inception, 70 artists have been awarded grants by the Foundation. Previous grant recipients include Cecilia Edefalk, Karin Mamma Andersson, Jacob Dahlgren and Gunnel Wåhlstrand. The 2012 Grant Recipients were Pauliina Pietilä, Sara Wallgren and Nadja Bournonville.
Guest jury 2013: Stefanie Hessler and Håkan Rehnberg

Explanatory Statement of the Jury: There is an inquisitiveness and humour in Josef Bull’s work that is difficult to resist. The instruments he works with offer a heightened experience to take place between people, as if the air we share carries an artistic community within it. Bull creates batteries out of lemons and other fruit, breathing apparatuses and other mystical objects, and yet his spiritualism is more grounded than not, more a nod to a historical phenomenon translated into artistic experimentation and invented figures.

Explanatory Statement of the Jury: Olof Inger has his very own divining rod, one that places artistic impulse just a single step before the actual execution of an artwork. Any and all effort appears to vanish. ‘Containers’, a collection of shrink-wrapped masses, address the notion of consumerism and monumentally increasing wastage. Deeply anchored in the physical world, they approximate a sort of white noise. His drawings meditating on movement, which begin and end at the same point, create a secure circuit ever convincing in its expressive strength.

Explanatory Statement of the Jury: Nanna Nordström creates a brand-new visual repertoire of materials, shapes and relationships between objects in her installations, a visual collection dressed in ideas and notions impossible to put into words. Experimenting with the relationship between a textual versus visual language, Nordström works in the middle ground that exists between the two, utilising the untranslatable. By suspending common objects in space, she inspires unique situations and contexts, testing the object’s physicality and identity through newfound constellations.