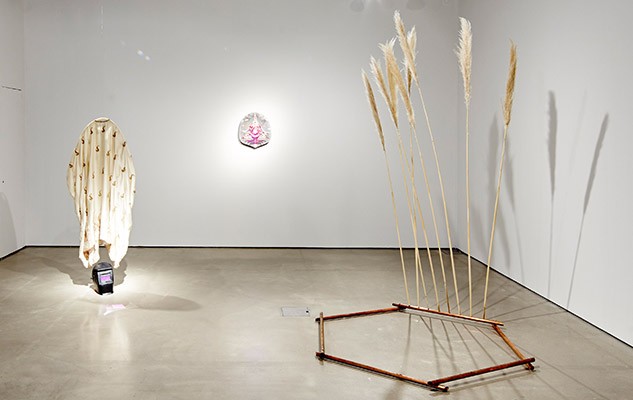 The Maria Bonnier Dahlin Foundation awards an annual grant for the support of young Swedish visual artists and artistic work. The Foundation was founded in 1985 by Jeanette Bonnier in memory of her daughter Maria. Bonniers Konsthall’s inaugural exhibition in autumn 2006 presented all previous grant recipients. Since its inception, 73 artists have been awarded grants by the Foundation. Previous grant recipients include Cecilia Edefalk, Karin Mamma Andersson, Jacob Dahlgren and Gunnel Wåhlstrand. The 2013 grant recipients were Josef Bull, Olof Inger and Nanna Nordström.

Welcome to the opening on Sunday 30 Nov at 12 – 5 pm! Free entrance all day. Director Sara Arrhenius presents the grant recipients and opens the exhibition at 1pm.

Guest jury 2014: Bettina Pehrsson and Paola Zamora
Thanks to Dan Wolgers who has written the Jury’s explanatory statements.

Through sculpture and collage, Dit-Cilinn examines humanity’s ambiguous relationship to nature and consumption. Dit-Cilinn is interested in traditional handicrafts, those that often embody a symbolic perceptiveness to nature, and she then confronts this with industrially mass-produced materials. In the installation Renewal, Dit-Cilinn combines both found and acquired objects, thus unifying ancient natural traditions with contemporary consumer society. Each and every material has its own unique meaning and role in the overall work. A copper hexagon with Pampas grass, a silk cloak, a plastic bottle containing urine infused with Amanita muscaria, a welding mask, a collage hanging on the wall – these items together create a triangular space into which the viewer is invited to familiarise oneself with the varying properties and ritualistic assumptions of each individual material.

Dit-Cilinn, born in 1983 in Mora, northern Sweden, currently uses Gothenburg as her home base. Having received an artist in residency grant from Region Västra Götaland, she is currently working in Querétaro, Mexico. In 2013, Dit-Cilinn graduated with an MA from the California College of the Arts in San Francisco . She was also granted a Residency at Rijksakademie van beeldende kunsten (Dutch Royal Academy of Visual Arts) in Amsterdam for 2015.

Explanatory Statement of the Jury: Kissing Mirrors, the project Dit-Cilinn began in 2000, is something she continues working on to this day. Perhaps the artist is kissing the mirror, or perhaps the mirror is kissing her – the title allows for both alternatives. The mirror is situated in-between, amidst time and space, amidst daily happenings. An interface, a checkpoint between two worlds, the worlds Dit-Cilinn travels between in the hopes of intertwining in her sculptures.

Dit-Cilinn understandably uses the mirror as a vessel for her thoughts, for she keeps herself from reflecting on the idyllic past located in the mirror’s depths, or from fleeing to a future sunbeam. The matter at hand for this artist is to buckle down with the dark tasks presented by the modern age. Dit-Cilinn prefers the present tense in her work, an alternative present tense, as she puts it. A present tense with a watchful eye – the mirror.

The mirror’s fragile, thin figure embodies the sense of the present tense. Faint fingerprints (and kiss marks) appear on the surface of the mirror, serving as the artist’s signature.

Take a look at her work. Notice how the sun, wind, heat, cold, the elements, minerals and vegetation become intertwined, reflecting themselves in one another.

Echo died when Narcissus neglected her, just as nature perils when culture turns its back on it.

Artists Lisa Gideonsson and Gustaf Londré have collaborated since 2009. This artistic duo creates installations and performance art containing everything from their own private research to larger collaborative projects in the public sphere. They set out together to locate a working method where they both embody the same figure, something they refer to as “the third,” in order to attain new knowledge and experiences. In 2014, GIDEONSSON/LONDRÉ graduated from Kungliga Konsthögskolan (the Swedish Royal Institute of Art) in Stockholm, and the installation exhibited at Bonniers Konsthall was their final school project. In order to suit its new surroundings, the piece has been reworked and entitled Hours. Two pendulum clocks have been built into plain white boxes – the clocks sound at every whole and half hour. When GIDEONSSON/LONDRÉ wind the clocks, they are set according to local time, but throughout the exhibition they fall more and more out of sync. In order to continue ticking, the clocks must be wound once a day – this task has been left to Bonniers Konsthall staff.

Lisa Gideonsson, born in 1986, and Gustaf Londré, born in 1985, currently live and work in Vålådalen, Jämtland, in northern Sweden. In 2014, they both graduated with an MA from Kungliga Konsthögskolan (the Swedish Royal Institute of Art) and were granted an Iaspis (Swedish Visual Arts Fund’s international programme) Residency for 2015.

Explanatory Statement of the Jury: Gideonsson and Londré are two people who are on a joint search to develop a third character, someone with the capacity to exist outside of them. This individual will bear their artistic work, that which they have created together. This sought-out third party could perhaps resemble a cephalopod, a single integrated mass with two legs.

The octopus belongs to the cephalopod family, bearing a single head and many arms and legs. Within this context, it is poignant to note that octopuses have three hearts, the most spectacular octopus being the nautilus.

The nautilus resides in the outermost chamber of its shell, which is in a continuous state of growth in accordance with Fibonacci’s sequence (where each number is the sum of the previous two). The resulting form is an infinitely beautiful spiral with increasingly bigger chambers, which are constantly being added upon and developed. The nautilus consistently houses itself in the largest, most recent working space, where it is fully active. The outgrown spaces that have been left behind can be filled with air or entirely emptied out as the creature so desires, enabling it to inhabit any depth whatsoever in the rich, warm ocean. The nautilus often rises to the surface at night to gaze at the stars.

Just who wouldn’t want to be a nautilus, that stunning subclass of cephalopod?

Ellisif Hals creates three-dimensional collages out of paper and paint, weaving together layer upon layer of architecture, archaeology and biology. The motifs comprise freely-interpreted historical and scientific scenarios, taken from the artist’s attraction to lost worlds and utopia. In her piece exhibited at Bonniers Konsthall, Hals has created a palace-like construction in a state of decay, with buildings, décor and vegetation overlapping. Technically speaking, the work is created through drypoint, with the artist carving out the motif on a copper plate. The motif is then printed on various pieces of coloured paper, and Hals then places layer upon layer of paper on top of one another, cutting and reorganizing them so that images appears in the different colours appearing between the print. The many different layers of paper and repetition of the motif create the three-dimensional image.

Ellisif Hals was born in 1981 in Norway. In 2006, she graduated from Konsthögskolan (the Art Academy) in Oslo. She currently lives and works in Malmö, Sweden.

Explanatory Statement of the Jury: The palace at Knossos is completely lacking defensive walls – it never had them in the first place. The palace has continuously remained wide open, exposed to individuals who could not resist the opportunity to raid its 1,300 rooms. Doesn’t this provide a true image of artistry itself? Nothing else is quite as simple to capture, plunder and demolish as artistry.

Ellisif Hals constructs a type of defenceless palace, her graphic montage increasing layer by layer until it eventually becomes truly multifaceted, a tangled maze of confusion, just like the labyrinth in King Minos’ immense palace. The palatial ruins from Knossos can actually be glimpsed in parts of the montage, exposed and shattered.

Another graphic artist, Piranesi, depicts the very same subject yet in the exact opposite manner, from the inside out in his Imaginary Prisons. The prison serves as a metaphor for artistic work. In Piranesi’s graphic etchings, figures wander (perhaps Piranesi himself?) throughout the elusive halls, which hundreds of years later lay in ruins in Ellisif Hals’ images. Or are the walls in her work still strong, even stronger? Do they encompass or exclude? Do they imprison or protect?

Ellisif, the art displays a person observing herself.