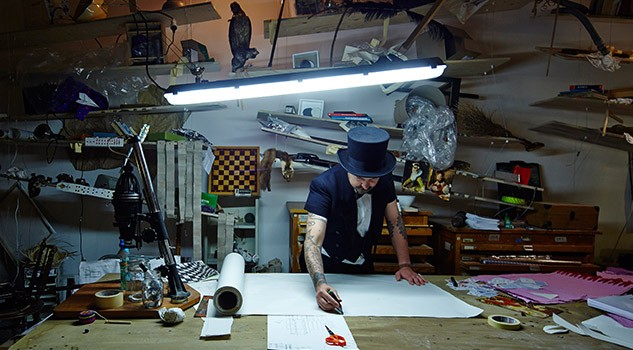 Bonniers Konsthall is proud to open the fall season with the first-ever solo exhibition of Brazilian artist Laura Lima in Scandinavia.

Living things, such as the human body, play the dual role of theme and material in nearly all of Laura Lima’s work. She allows the body’s volume, its heat and its scent to occupy space within the exhibition hall; she tests its strength and movement, figuring out how it can be controlled and restrained. Lima’s artistic output is founded in a long Brazilian tradition of performance art enlisting the viewer’s participation, yet she is also fascinated in the outspoken energy of more folksy art forms such as the carnival and circus. This first large-scale solo exhibition of Laura Lima in Scandinavia features work entailing an elusive puzzle. And still Lima dares visitors to drop any expectations of what an artwork should be, inviting them to become a part of a world brimming with fantastic experiences.

The Naked Magician, the central piece in the exhibition, consists of a copious number of collected objects and a person playing the role of the magician. The installation is constantly transforming, appearing differently depending on what the varying magicians decide to do with the objects. The Naked Magician contains a powerful charge between the apparent and the unspoken. The magician openly reveals all tricks to the public, the sleeveless tailcoat making it impossible to hide any cards up the sleeves. But what the magician eventually creates, just what part of it is magical, remains a secret.

The same cryptic energy can be found in Bar/Restaurant, the second large sculptural installation in the exhibition, involving a bartender deliberately serving beer to an odd group of guests – a cone, a sphere, an umbrella –seated at neatly arranged tables and chairs. Visitors who wait around long enough will witness the glasses as they slowly empty.

The exhibition features Lima’s large-scale installations alongside a series of smaller works, pieces concealing their own well-hidden secrets. The sculpture Clown will only appear at certain times throughout the exhibition, popping up unannounced. And many visitors to the museum will completely miss the work To Age, where members of the museum staff play the leading roles. The installation Choice requires the visitor to enter a dark room alone, bearing the secret of what took place within back out again into the public sphere.

As part of the exhibition is also a unique opportunity to experience Laura Lima’s monumental work Cinema Shadow – a film installation in which a film is shot and screened simultaneously during one whole day. This version of Cinema Shadow is carried out in collaboration with the Stockholm Film Festival.

Like many of her contemporaries, Laura Lima is greatly inspired by the groundbreaking Brazilian artists of the 1960s and 70s who expanded the artistic field through the development of performance art as a more elastic definition of sculpture. It is impossible to avoid mentioning Brazilian artists Lygia Clark, Lygia Pape and Helio Oiticica, three predecessors who pioneered atmosphere, movement and change as components of a work of art. In order to reveal the world of Lima, Bonniers Konsthall present an accompanying presentation of historical film material, highlighting artists and filmmakers that have been influential in Lima’s work.