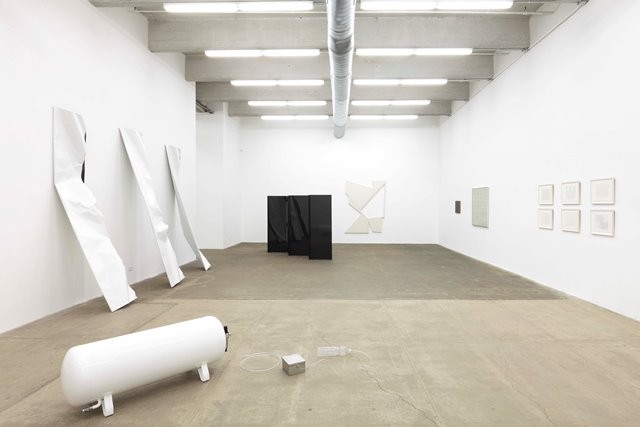 The exhibition, titled A Chromatic Loss, examines the poetics and politics of the body, technology and the shape of time in the binaries of black and white. The exhibition’s restrictive palette allows the artwork’s immanent criticality and material subversiveness to simultaneously cohere as a unified collective and maintain divergent subject positions. In this exhibition, established artists such as Betty Tompkins, Tom Burr, John Coplans, Donald Moffett, Nancy Grossman and Frederick Hammersley coexist alongside an emerging generation of artists, including Wyatt Kahn, Xylor Jane, Robert Zungu, Dave Hardy, Michelle Lopez and Arcangelo Sassolino, to deploy abstracted, allegorical and symbolic representations of the body within a post-historical culture.

A Chromatic Loss makes our current cultural climate seem strange. For example in the work of Betty Tompkins, Wyatt Kahn, Dave Hardy and John Coplans, bodies — representational and abstract — are depicted as fragmented, disjointed, composite and reconfigured. We are meant to question why anthropomorphic representations might appear shattered and re-sutured in 2014. Or in the case of Michelle Lopez, why a vertical, folded, powder coated sheet of black and white metal rings true as an airplane wing dislocated from its cabin after a crash or perhaps a crushed metaphoric body holding itself upright by leaning against the gallery wall. The tenuous relationship between man and nature on the brink of environmental apocalypse manifests itself through the Minimalist application of silk worm cocoons on painted tempera wood boards from emerging artist Robert Zungu or through the kinetic sculptural poems of Italian artist Arcangelo Sassolino’s, whose air compression tank rhythmically fills and deflates an empty plastic water bottle. Through his highly sophisticated, yet deceiving low tech sculpture, Sassolino reminds us that, in time, even machines will breathe. The exhibition proposes that after the shock, trauma and quotidian nature of atrocity, Speech feels even more unattainable, repressed (Grossman), censored (Tompkins) or even voyeuristically unzipped (Moffett). Finally, the viewer is implicated through their own reflection in Tom Burr’s dark gray smoke screen or in Xylor Jane’s hand painted dot matrix depicting the countdown of a bedside digital alarm clock or perhaps a timer slowly waiting for the events of the morning to detonate.
www.bortolamigallery.com