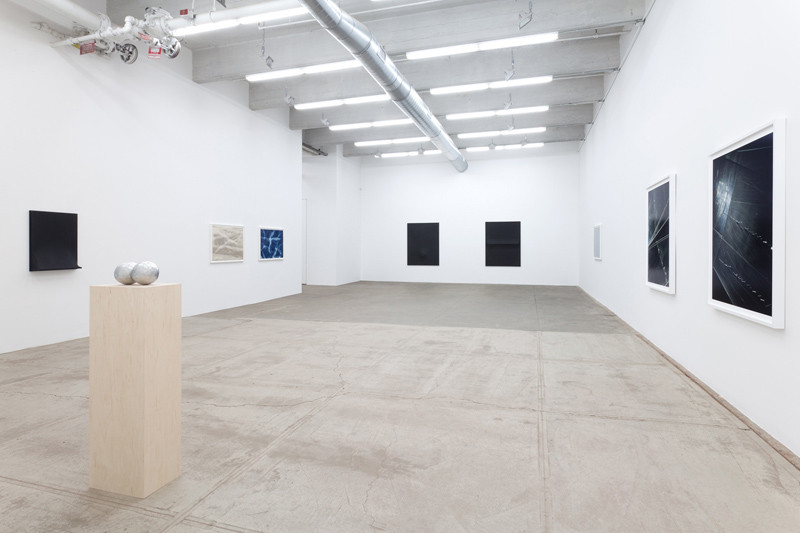 NEW YORK, NY – Bortolami Gallery is pleased to present Constructs, Abrasions, Melons and Cucumbers, an exhibition of works by Barbara Kasten and Justin Beal from June 21st to August 3rd with a reception for the artists on June 21st from 6-8p.m. The exhibition aims to underline the artists’ contrasting ways of “mis”-leading the audience’s first reading of their work. Though forty-two years apart in age, both artists are interested in challenging the potential of their chosen mediums; Kasten presents complex sculpture as photography; Beal incorporates architectural elements into sculptural works, as well as transforming natural objects into humorous constructs.

Throughout her career Kasten has continually pioneered experiments in photography and will exhibit works spanning from 1975 to 2012. In her cyanotypes from 1975 entitled Photogenic Paintings, Kasten folds and crumples screens onto painted paper and exposes them to light, creating an intricate imprint of the textured items. In her Constructs and Studio Constructs series, she photographs assemblages that she has meticulously arranged in her studio, which often includes glass, mirrors, screens, and metal displayed in various stages of lighting. The resulting images resemble Post- Modern Constructivist Art rejecting the documentary nature of photography and creating an illusion of three-dimensional space.

Justin Beal will exhibit new work that continues his subtle critique of modernist design and consumer culture. Beal will include chrome sculptures of cast aluminum cucumber and cantaloupes with a nickel finish, suggesting sexual undertones that are often inherent to high end design objects. Beal will also exhibit a selection of black wall sculptures made of matte urethane rubber, which are secondary casts of wrapped domestic architectural elements such as poles and shelves. Juxtaposed with Kasten’s Studio Constructs and Photogenic Painting, both works reveals the artists’ varying aims to represent three-dimensionality by way of leaving a sculptural imprint.

Barbara Kasten(b. 1936 Chicago) received her BFA in painting and sculpture from the University of Arizona in Tucson and her MFA from the California College of Arts and Crafts in Oakland. Her work has been widely exhibited at various institutions including the International Center of Photography, New York; deCordova Sculpture Park and Museum, Lincoln MA; Santa Barbara Museum of Art; the Art Institute of Chicago; The Kunstverein Nurnberg; the San Francisco Museum of Modern Art, and in 2011 her work was exhibited at Pacific Standard Time. Her work is included in several prestigious collections including the Museum of Modern Art, New York; the Los Angeles County Museum of Art, the Museum of Contemporary Art, Chicago and the J. Paul Getty Museum, Los Angeles.

Justin Beal (b. 1978 Boston) received an MFA from the University of Southern California in Los Angeles in 2007 and a BA in Architecture and Design from Yale University in New Haven, Connecticut, in 2001. His work has been included in exhibitions at prestigious institutions including The Sculpture Center, Long Island City; De Appel Centre for Contemporary Art, Amsterdam; Moscow Museum of Modern Art; and the Orange County Museum of Art, Newport Beach, CA.
www.bortolamigallery.com