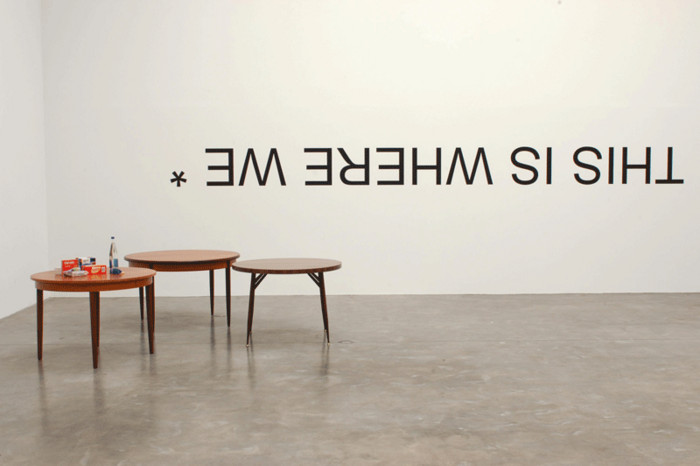 Bortolami is pleased to present an exhibition of new works by Bozidar Brazda. For Beat Meat Table Eat the artist presents examples of Scandinavian-style Modernism alongside his own zine, works in vinyl and videos to suggest the gallery as a kind of “showroom”. The installation’s collection of mostly ready-made tables, dating from the 1950s to the present, includes one that hangs from the ceiling like a slab of meat. The remainder are intermixed with new videos, sculptures and wall texts that continue Brazda’s use of East/West themes, body-based imagery and coded autobiographical references. A clear vinyl suit titled April 13th has been tailored to the artist’s dimensions and reiterates the exhibition’s anthropomorphic slant while Mogensen, a zine made by Brazda specifically for Beat Meat Table Eat, sums up the exhibition’s hermetic plot. Its title and content refer not only to the Danish furniture maker Borge Mogensen (also born on April 13th) but also to the Danish punk musician Niels Mogensen whom Brazda has referenced in earlier works. Everyone is welcome to a copy. Bozidar Brazda was born in Cambridge Canada in 1972. He lives and works in New York City. Brazda has held performances at The Kitchen, New York, 2007, the Swiss Institute of Contemporary Art, New York, 2004 and has had a solo exhibition at The Moore Space in Miami in 2005.
www.bortolamigallery.com