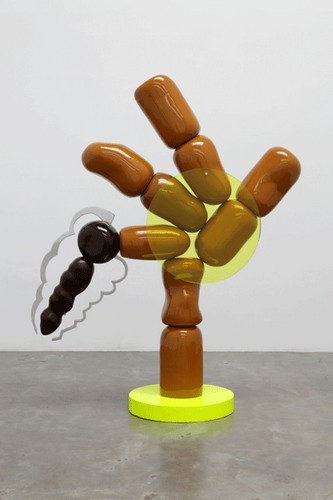 Bortolami is pleased to present the second exhibition at the gallery of British sculptor Gary Webb-- another daring exploration of color, material and composition.
Over the past decade, Webb has created a visual vocabulary that rearticulates cues from the history of sculpture in a voice that is distinctly suggestive, humorous and surprising. Brave choices in palette enhance a sense of volume and scale that is exuberantly exaggerated, nearly human but somehow askew. The forms are at once organic or biomorphic as well as wildly synthetic.
References are obvious without being superfluous or overarching. These span the twentieth century and include Henry Moore, Nikki de Saint Phalle, Roy Lichtenstein, Richard Artschwager, Franz West, Richard Deacon, and others.
Brancusi is profoundly present, as his attention to form, texture, balance and the boundary between abstraction and representation are clearly up for consideration, with both reverence and parody. What Webb brings to the conversation between these historic figures is decidedly contemporary: the gathering of these disparate forms and gestures verges on a Post Modern sense of appropriation. This position is underscored by materials that recall familiar objects from popular or consumerist culture—the Plasticine limbs of stop-animation characters; the slick and seamless molds of contemporary automobiles; or the cast-plastic curves of the Golden Arches.
Webb employs a vast arsenal of goodies to execute these forms: Perspex, metal, fiberglass, plexi, bronze, wood, marble, mirror, crystal, brass and other materials, both natural and man-made.
Gary Webb was born in Hampshire in 1973. He currently lives and works in London. Recent solo exhibitions include: Revolution Oil in 2008 at the Approach, London; Mirage of Loose Change, a survey of work that traveled from 2005 through 2007 to: Kunsthaus, Glarus; Le Consortium, Dijon; and the Centre d’Arte Contemporain, Geneva; British Art Show, 6, BALTIC The Centre for Contemporary Art, Gateshead, 2005, and It’s All An Illusion. A Sculpture Project, Migros Museum fur Gegenwartskunst, Zurich, 2004. Group exhibitions include: The Moderns, Castello di Rivoli Museo d’Arte Contemporanea, Torino, 2003, Biennale d’Art Contemporian de Lyon, 2003, and Casino 2001, SMAK, Ghent.
www.bortolamigallery.com