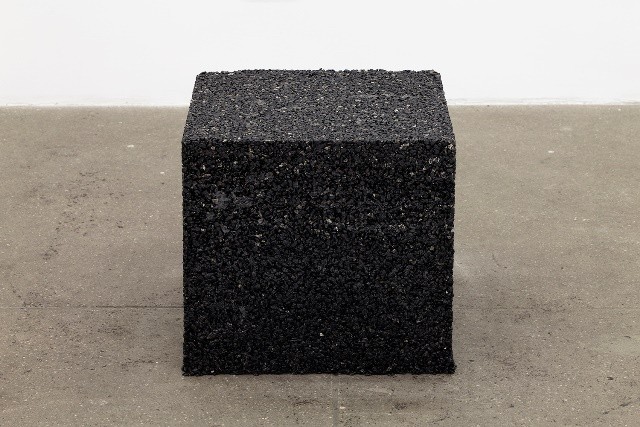 Bortolami is pleased to announce the fifth solo exhibition at the gallery of Michel François, on view from February 21 to March 20, 2014.

For this exhibition, François has poured black asphalt across the main space of the gallery, evoking a rough urban street. Littered with hundreds of shiny bronze peanuts (which seem to have fallen off the back of a truck), this rectangular tarmac is punctuated by spiraling cacti and surmounted by a large cube of ice, which “waters” the plants as it melts. A taut metal wire, encrusted with gold leaf and suspended across the space, vibrates continually with the air current; and wallpaper, applied like a mask onto the gallery’s walls, has been intermittently torn away, exposing its rough fibers. Dense, white plaster rectangles–which François has partially submerged in a bath of ink and tea–have been hung like landscape paintings; the surreal black stains at once index a process of absorption and resemble the charred remains of a fire.

François’s installation responds to the conditions of the gallery: the expansive white walls and the white wallpaper, the poured concrete floor and the black asphalt, and the rows of fluorescent ceiling fixtures, which here start to take on the quality of greenhouse lights (bringing to mind a process of photosynthesis). But what confronts viewers is a strange, inverted, contaminated ecosystem: a space of liquefaction, entropy, absorption, equilibrium, and disequilibrium.