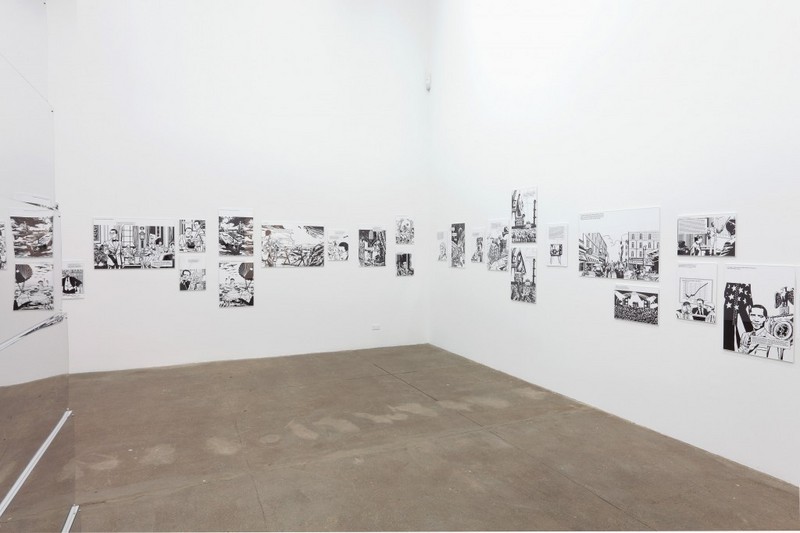 Bortolami is pleased to present Totem Motif, an exhibition of recent works by Scott King which originated this past May at Between Bridges, Berlin. As in the first variant of the exhibition, King's show at Bortolami will feature works that interrogate the utility and ridiculousness of public sculpture—its heroicism, romanticism, optimism, and naiveté.

Anish and Antony Take Afghanistan is a 32-part illustration of a fantasy scenario in which artists Antony Gormley and Anish Kapoor have been commissioned by a UN-backed think-tank to 'regenerate' warravaged Afghanistan through the creation of enormous public sculptures. This graphic novel — with illustrations by Will Henry — comments on the belief that public sculpture can socially and economically uplift struggling communities, “The idea being,” King says, “that if the work of these two sculptors can be used to 'regenerate' poor areas like Gateshead, Middlesbrough, Stratford et al, [towns in the artist’s native England] then surely it might help to regenerate a [...] country like Afghanistan.”

Study of Blackpool Tower consists of 14 photographs all taken from a half-mile radius of Blackpool Tower. Built in the 1890s as a diminutive version of the Eiffel Tower, Blackpool Tower now exists less as an expression of Victorian optimism and more as a reminder (by comparison with the poverty of its surroundings) of Margaret Thatcher's assault on the industrial north of Britain.

Totem Motif, from which the exhibitions takes its title, is composed of a found photograph of two young women admiring a newly erected public sculpture by Henry Moore, one of the most prolific makers of public artworks, and in this sense a clear antecedent to Gormley and Kapoor. This iteration of Totem Motif will also include a new sculpture, Infinite Monument, King’s own contribution to the canon, which exists in several stackable mirrored sections, infinitely expandable and infinitely monumental.

Scott King was born in Goole, East Yorkshire, England, 1969. He lives and works in London. In the 1990s he worked as Art Director of i-D magazine and later as Creative Director of Sleazenation. As a graphic designer he has collaborated with iconic figures such as Malcolm McLaren, the Pet Shop Boys, Michael Clark and Suicide. King’s work has been exhibited internationally at the Museum of Modern Art, New York; The Museum of Contemporary Art, Chicago; Palais de Tokyo, Paris; The State Hermitage Museum, St. Petersburg; the Institute of Contemporary Arts and the Barbican, London. 2014 solo exhibitions include: Totem Motif, Between Bridges, Berlin, Germany; De-Regeneration, Spacex, Exeter, UK; The Festival of Stuff, Haus der Berliner Festspiele, Berlin, Germany. Forthcoming group exhibitions include: Regenerate Art, 2014, Kunstverein Munich, Germany; and Panda Sex, State of Concept, Athens, Greece, 2014.
www.bortolamigallery.com