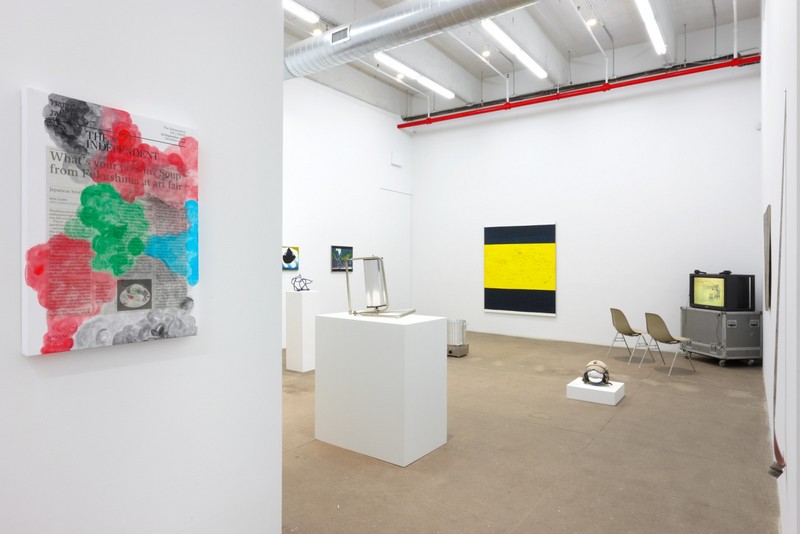 Bortolami and Green Tea Gallery are pleased to announce The Radiants, an exhibition organized by UNITED BROTHERS and Jacob King. Coinciding with the fourth anniversary of the earthquake and resulting crisis at Japan’s Fukushima Daiichi nuclear power plant, this exhibition features new and historical work by over twenty artists, and will be on view at 520 West 20th Street from February 28 to March 28, 2015.

In physics, radiation describes the transmission of energy in the form of waves or particles moving through space, traveling outward in all directions. An extremely broad category, it encompasses both ionizing radiation (such as x-rays and gamma rays) which can cause atoms to gain or lose electrons, breaking chemical bonds and dangerously altering vital biochemical molecules like DNA, as well as weaker, non-ionizing radiation (such as visible light, infrared light, and microwaves), which mainly generates heat.

Reflecting the multifarious nature of radiation — and both the ubiquity and anxiety which surround this largely invisible force — the works in this show take on multiple forms and dispositions. Included here are paintings by Enrico Baj from the postwar Arte Nucleare movement; drawings by Tatsuo Ikeda made in response to the Lucky Dragon incident of 1954; Robert Barry’s “0.5 Microcurie Radiation Installation” from 1969; a group of "photographs" which Sigmar Polke created by exposing photo-sensitive paper to Uranium ore; a Michael Smith video from 1983 in which he follows instructions for building a government-approved home fallout shelter/snack bar; and a painting which the Japanese collective Chim↑Pom “added” without permission (in May 2011) to Taro Okamoto’s “Myth of Tomorrow,” a mural in Tokyo’s Shibuya subway station that allegorizes the bombing of Hiroshima.

These works are presented together with new works made specifically for the show, which engage with radiation and its effects and abstractions: Jay Chung & Q Takeki Maeda have made a painting using a technical Nano Prussian Blue pigment developed to absorb radioactive material; Sergei Tcherepnin uses a recording of a Geiger counter at Fukushima as the basis for a new sound installation; Amy Sillman presents a new work which references various dreams related to encounters with radiation (e.g. from medical devices); Ei Arakawa contributes a group of floor lamps modeled on the Fukushima Daiichi nuclear reactors after the incident; and a young artist and writer from Tokyo, Erika Kobayashi, presents an installation related to her grandmother and Japanese research on radiation during World War II.

Also on view are a variety of works that do not specifically thematize radiation or Fukushima, but which, brought into this context, expand and complicate the dialogue around energy and abstraction (and the visible and invisible.) These include paintings and sculptures by Richard Aldrich, Kerstin Brätsch, Leidy Churchman, Jutta Koether, Sam Lewitt, Nora Schultz, and Anicka Yi.

Green Tea Gallery Worldwide was founded in 2011 by Ei Arakawa, a New York-based artist, and his brother Tomoo Arakawa, who owns three tanning salons in and around Fukushima. As a response to the crisis, Green Tea Gallery initiated a dynamic exchange between Fukushima and the international art world, inviting foreign artists to engage with the representations and realities of the situation while, at the same time, leveraging structures of the art world to bring relatives from Fukushima into new situations and wider discourse. (Tomoo received compensation money from the power company after the disaster, which he and Ei have used to produce work under the moniker UNITED BROTHERS.) Projects have included a pop-up at the Arakawas’ cousin’s house in Kanagawa, Japan, a presentation at a friend’s studio in Brooklyn, an office in Paris, a residency on the Big Island of Hawaii, and a booth at the Frieze Art Fair in London, in which their mother cooked soup for visitors with vegetables grown in the vicinity of Fukushima ("Does This Soup Taste Ambivalent?"). Masquerading as a global commercial enterprise, this exhibition marks Green Tea Gallery’s Chelsea debut.

Please note that on March 11th the gallery will be closed, as a symbolic announcement of Don't Follow the Wind, a conceptually “inaccessible” international exhibition happening in the evacuated exclusion zones in Fukushima with contributions from a number of international artists.
www.bortolamigallery.com