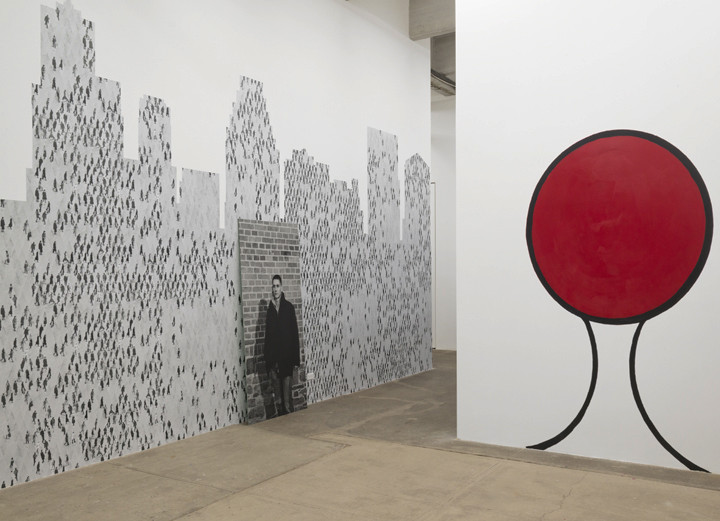 The exhibition is a 1:1 scale mise-en-scene of the city, with a silhouette of a city-scape made of Thomas Bayrle wallpaper and a population composed of Willem Oorebeek’s “Vertical Club” (after which the exhibition takes its title). A restaurant with plates by Tom Humphreys and spoons by Anne Speier will feature a collaborative series by Clegg&Guttmann and Will Benedict of people having dinner. A copy shop by Wolfgang Breuer, a bus stop by Pentti Monkkonen, bathroom doors by Anita Leisz and a pillar for a highway underpass by Amelie von Wulffen all lead the viewer to read the exhibition as elements of a city. Public information will be presented in the form of a poster by Amelie von Wulffen and Lucie Stahl promoting NYC’s annual AIDS walk; while another poster, by Nina Könnemann, advertises her film “Bann”, which documents public smoking habits in London’s financial district, plays in a theater with seating by Tom Burr. TV’s in the restaurant will feature a video by artist David Leonard originally broadcast on KTLA News, in which he reminisces on his experiences as a Jew during the L.A. riots, along with a music video by Animal Charm for Ariel Pink’s “Witchhunt Suite for WWIII” and an animation by Thomas Bayrle of a head made of highways. A mural by Stephen Willats comparing buildings to people, ceramics to buildings and people to ceramics is the writing on the wall.