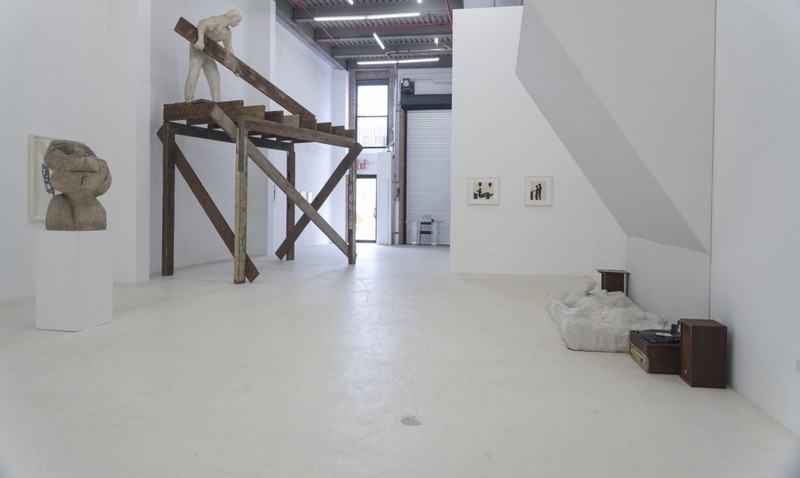 We are excited to announce the inauguration of BROADWAY 1602 HARLEM with the group show 121 Street.

In the building complex of a 1903 Firehouse on 211 and 213 E. 121 Street, BROADWAY 1602 HARLEM developed in the last half year a gallery partnership with Tempo Rubato (Tel Aviv) and Freymond-Guth (Basel).

Further spaces in the two-building complex are shared by the three galleries for events and show rooms.

Our inaugural show 121 Street has at its center the two George Segal installations “Man on Scaffold” (1976) and “Woman listening to Music” (1972). Segal’s life cast figures embody the spirit of metropolitan social realism.

Brazilian artist Lenora de Barros – as a young girl deeply impressed by Segal’s “Gas Station” at the 1967 São Paulo Biennial – staged in 1984/2006 the video performance “Homage to George Segal”, a film that will be screened in our show.

The sculptural sensibility in the work of Wanda Czelkowska and Alina Szapocznikow – both outstanding women artists from the Polish 1960 avant-garde – creates a surprising resonance with Segal’s works. We are introducing in this exhibition Wanda Czelkowska with her post-neo-primitivist plaster sculpture “Head” (1964).

On our roof terrace we present Tom Burr’s outdoor sculpture “A Few Golden Moments” (2011) – a special guest appearance by the New York artist in our new premises.
www.broadway1602.com