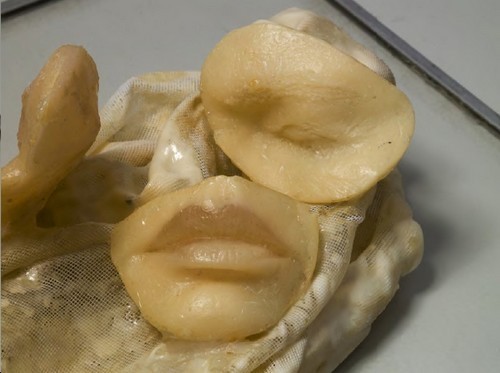 The second show of Polish-French artist Alina Szapocznikow (1926–1973) at BROADWAY 1602 presents for the first time a group of works, which could be termed the “conceptual” shift in the artist’s practice dating back to the beginning of the 1970s, when Szapocznikow extended her notion of sculpture into immaterial forms. While Szapocznikow radicalized the style and vocabulary of her pop-surrealist polyester based sculptures - exemplified in the show by a group of works dating from 1967-71 - the new decade with its movements expanding the boundaries of art gave inspiration to widen her practice. Different paths of experimentation existed by then side by side in her oeuvre and in genuine aesthetic synthesis.

Central to the exhibition is the first presentation of the complete portfolio My American Dream (1970/1). In correspondence to conceptual art forms of the time, this portfolio consists of extended research material, letters and text work written by the artist, in preparation of a massive sculptural project - a double life size marble Rolls Royce - which was from the beginning on of such material dimension that it could not be realized, but remained to exist on the level of an idea documented in this multi-facetted archival art work. Part of the portfolio is a correspondence with
Documenta ’72 director Harald Szeemann. Szapocznikow had proposed the marble Rolls Royce project to the curator, only to receive the regretting but sharp response that such a costly piece could only be realized with sponsors provided by the artist, while other responses of potential sponsors are pointing to the ‘difficult times’ overshadowed by the oil crisis. Altogether the documents of My American Dream keep up an ambiguity between playful concept and the artist’s determination to actually realize the gigantic marble car.

My American Dream was soon after shown simply in form of a text sheet/idea contribution, according to the instructions that curator Pierre Restany had given out to the participants of the show “Art Concepts from Europe” at Bonino Gallery in NYC. In this text Szapocznikow envisioned that if the precious marble Rolls Royce were to be bought by a collector - ‘if such a fantastic snob exists’ - who would have glamorous parties on his lawn in the car, then her American dream would be accomplished. With a conceptual reference to Pop Art’s playful affirmations of consumer culture Szapocznikow regarded the Roll Royce as an object being “completely useless, and a reflection
of the god of supreme luxury. In other words, a “complete work of art”.”